The wireless transmission of electrical power often brings up images of Nicola Tesla and his work on wireless power transmission a century ago.


The wireless transmission of electrical power often brings up images of Nicola Tesla and his work on wireless power transmission a century ago. William C. Brown, the inventor of the well-known rectenna for microwave power transmission, wrote an excellent historical review of the technology dating to the work of Heinrich Hertz that actually predated Tesla.¹ Although Tesla’s vision for the electrical grid was never adopted, other applications better suited to wireless transmission and collection of useful power for military and aerospace are now being implemented.

For energy harvesting, one can consider two approaches — broad or narrow band. Any acquaintance with RF techniques leads to an understanding that a great deal of effort is usually expended on tuning as narrow a frequency band as possible. For the typical use of radio for communication signaling, the main benefit is to reduce the noise and rejection of other signals outside the communication channel. Narrow band design has two other benefits of particular interest in energy harvesting. Focusing on a small range of frequencies often creates gain in the antenna or circuit as well as improved power transmission through the matched tuning of all the circuit elements.

However, narrowing the band of collected frequencies has the deleterious effect of rejecting other ambient energy that could otherwise be scavenged. Ultra-wideband (UWB) is a communications protocol that exploits a larger range of frequency to improve performance for certain applications. Wideband techniques are also employed for energy-harvesting applications to collect the widest possible array of frequencies in the bands with the greatest energy density available.

As one may expect, most off-the-shelf antennas are designed with specific tuning for narrow band reception of RF signals. In some cases, especially for mobile phone applications, antennas are available that cover several bands. For antennas in the cellular GSM band, designers should consider the Taoglas 931-1052-ND Penta-band antenna (Figure 1) covering five major cellular bands near both 900 MHz and 1.9 GHz. Another pentaband antenna is available from Ethertronics. The 939-1022-1-ND (Figure 2) offers high gain of 2.5 dBi for the 2-GHz band and is shorter than the Taoglas design.


For energy scavenging, a wide band antenna allows a range of ambient energy bands to be picked up in the hope of collecting more ambient RF energy. The rectenna was originally designed to address the problems associated with bulky microwave tube rectifiers for envelope detection and conversion for the early development of aerospace in the fifties. The basic idea was to create an array of small dipoles with semiconductor diodes to convert the RF energy to DC at each dipole site. This design concept is useful for energy-harvesting applications, although most designers will want a compact design comprised of only a single dipole rather than a large array. After all, aerospace teams in the 1950s trying to power small pilotless aircraft required many orders of magnitude more power than today’s micropower electronic sensor platforms or battery trickle charging applications.

A rectenna for most frequency bands of interest to energy harvesting can easily be built on a small piece of printed circuit board. Two-sided PCB allows a dipole pattern on one side, and a balun and feed through to the second side where the rectification and other harvesting electronics such as a mean power point tracking (MPPT) IC can be located to create a complete system design on one substrate. The Pulsar 182-1027-ND PCB starter kit (Figure 3) can be used to build the rectenna and harvesting circuit once it is designed and laid out. 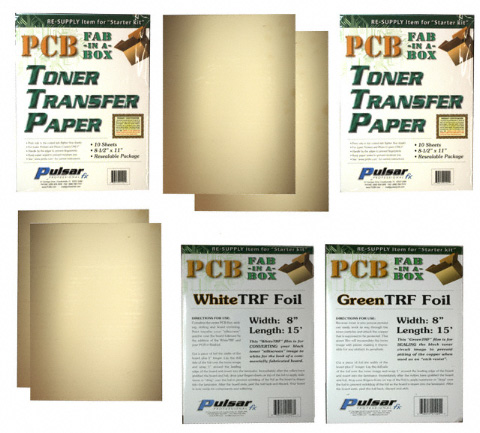 
Cellular radio bands have been of particular interest since the base stations used by the carriers broadcast at relatively higher power compared with consumer devices such as handsets. However, one may also consider the proliferation of consumer-grade broadcast devices with the emergence of wireless local area network (WLAN) or Wi-Fi as the ubiquitous protocol for network connection in laptops and other portable electronic devices. The bulk of Wi-Fi communication is carried out at 2.4 GHz.

One interesting study from a research group from Eindhoven, Netherlands, compared narrow and wideband approaches to maximizing power output for a miniature sensor system.² The loose requirement pushed the researchers toward GSM and WLAN since these bands allowed the use of a printed antenna occupying only a few square centimeters, similar to the rectenna described above.

Studying a number of environments from rural to inner cities, the Dutch group concluded that available RF energy was typically on the order of 0.1 mW/m² when the receiving antenna was within 200 m of the GSM base station (for both GSM-900 and GSM-1800).

Generally speaking, the RF power falls off with the square of the distance to the source, so proximity to the transmitting antenna is very important. Therefore, the study continued by examining WLAN, since the transmitter placement offers the potential to locate harvesters very close to the power source. The most interesting result of this research was that a small LED could be powered directly from a cellular handset with 1 W peak power transmitting at closer range of approximately 20 cm. This result is promising for locating RF harvesting nodes in locations with dense populations of mobile phone users.

Although the trends in cellular telephone technology, including rollouts of new frequency bands, suggest that energy densities for existing channels may go down over time, we should expect the total RF energy density to increase as new, faster data services like 4G and LTE are implemented and available spectrum is used for new applications. These trends suggest that RF energy-harvesting systems designed for wider band scavenging may offer longer useful lifetimes.