For consumers, the promise of a body area network (BAN, Figure 1) offers the vision of an integrated view of health; for device manufacturers, BAN represents a significant opportunity for new classes of devices. At the same time, the successful deployment of numerous embedded devices depends on their ability to operate for months at a time without recharge, or even without a need for recharging or replacing batteries at all. 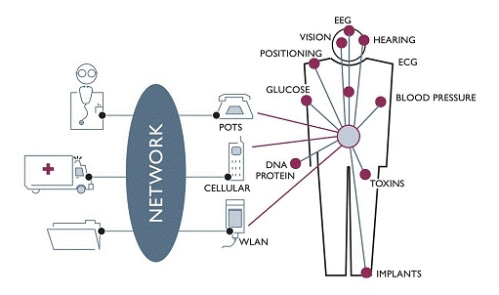 As a result, demand for extended operation has driven a growing interest in capturing unused power generated by normal human activities such as walking and breathing. Beyond these consumer-oriented drivers, interest in energy harvesting has grown rapidly in the medical sector. The ability to eliminate or forestall battery replacement also helps ensure always-on operation and patient compliance in other critical applications such as blood glucose monitors and ECG monitors.

Energy harvesting solutions can also directly contribute to patient safety. Implantable devices powered by ambient energy not only reduce the size of the package implanted in the patient, but also reduce the cost and risk associated with battery replacement, which currently must be performed surgically every 6-10 years. The size reduction of an implanted cardiac pacemaker afforded by battery-less operation also enables more innovative medical solutions, such as elimination of cardiac probes and the ability to attach the pacemaker to the left ventricle, which is particularly prone to risk with traditional pacemakers.

In fact, cardiac pacemakers and cardiopulmonary devices in general are well-suited to energy harvesting because of the range of available ambient-energy sources including cardiac muscle movement, blood flow, and temperature differentials. Along with devices designed to harvest kinetic energy associated with heart muscle contraction, other solutions have looked to harness the energy of blood flow. The Department of Veterans Affairs has developed an arterial cuff energy harvester designed to power a variety of implanted devices for continuous monitoring of disease, heart function, aneurysms, and diabetes. Using piezoelectric transducers, the harvester wraps around an artery and generates power from the expansion and contraction of the arterial wall.

Although biosource energy harvesting leads to more novel solutions than found in consumer or industrial applications, the nature of such a harvester follows a familiar pattern. As with traditional harvesters, a biosource energy-harvesting design combines an ambient-energy power supply with an MCU and wireless radio, or other communications subsystem needed to support the intended application (Figure 2). 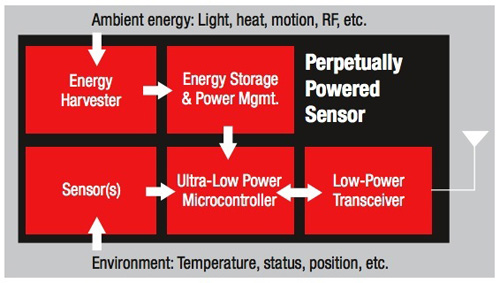 Aside from more complex medical applications such as pacemakers or cardiac synchronizers, devices intended to harvest energy from biological sources typically feature very-low power requirements. A simple heart rate monitor might need to support only 100 samples/s. At 10-bit resolution, the 1 kbps data rate would allow use of ultra-low-transmitter power for communicating the data to the host or local data concentrator. If transmitter power were operated at minimal levels needed for close-range communications, overall power consumption for such a device could be only a few microwatts.

For bio-sourced energy harvesting, energy transducers would include mechanical transducers, temperature transducers, and even fuel-cell designs. In addition, engineers are using magnetic-coupled resonators for wireless power sources capable of recharging an implanted energy-storage device such as a thin-film battery.

Among available sources, kinetic energy in the form of motion or vibration is generally the most versatile and ubiquitous ambient-energy source available. Research studies suggest that as much as 1 W of energy is available from the heel strike of a foot on a hard surface. Other studies have found that even the motion caused by the human heartbeat could generate 10 microwatts of power, well above the nominal power requirements of a pacemaker.

In kinetic harvesting applications, suitable transducers include piezoelectric devices such as the V22BL in the Mide Technology Volture series, or LDTO-028K in the Measurement Specialties LDT series. With these devices, a relatively small deflection due to muscle movement can generate a significant voltage output (Figure 3). Piezo devices generate maximum energy output at their resonant frequencies, which engineers can change by adding mass to the cantilevered arm of typical piezo devices. Available devices such as the Measurement Specialties LDTM-028K are provided with a small moveable-mass element for modifying resonant frequency. 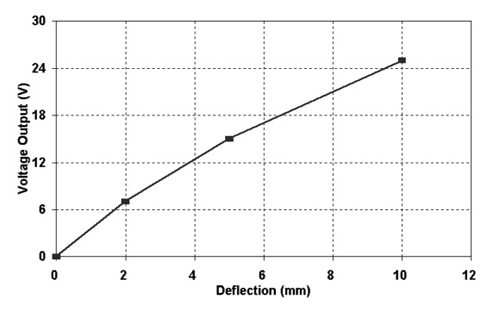 Engineers can also harvest significant energy by exploiting the Seebeck effect, using thermoelectric transducers to generate power from temperature gradients between the human epidermis and the surrounding air. Devices such as the CP60240 in the CUI CP60 series are able to generate milliwatts of power at even slight temperature differentials and loads (Figure 4). 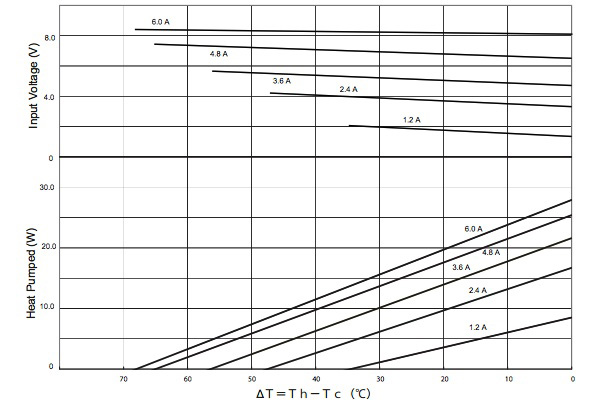 Figure 4: Thermoelectric devices such as the CUI CP60240 can exploit temperature gradients between the human body and the surrounding environment to generate milliwatts of power at the small loads typical of energy-harvesting applications (Courtesy of CUI).

Engineers may soon find availability of ambient energy harvesting from another source, miniature fuel cells powered by glucose or other sugars within the body. Glucose fuel cells are generally found in one of two groups, enzyme-catalyzed and those catalyzed from non-biological materials. In either case, the devices oxidize glucose to gluconic acid, causing release of an electron pair. Scientists have created both types of fuel cells with sustained power output in microwatts, although enzyme-based fuel cells may require eventual replacement of the enzyme catalyst.

Although kinetic and thermal energy harvesting represent the most likely sources for powering BAN devices, companies can turn to more direct methods of recharging storage devices built into an embedded application. Using RF induction, engineers could charge a BAN device including implanted devices. Furthermore, use of RF induction would enable bidirectional data communication even with implanted devices using the same methods employed for RFID tagging and communications.

Used with humans, RF induction techniques need to carefully consider the specific absorption rate (SAR) of tissues exposed to the RF energy. SAR value, measured in watts per kilogram for 1 g or 10 g of tissue, is directly related to the incidental electric field according to the following equation:

where σ and ρ are the conductivity and the density of the involved tissues, and E|2 is the norm of the incident electric field.

Ultrasound has also been used to transfer energy to implanted devices. Although power-transfer efficiency is low, this approach can deliver milliwatts of power to implanted devices. The use of relatively short bursts of ultrasound frequencies below 1 MHz avoid localized heating effects that form the basis of high-frequency therapeutic ultrasound treatments, while delivering sufficient energy to charge energy-storage devices.

Regardless of energy source, the key to effective energy harvesting from biological sources remains one of maximizing the transducer's output. Piezoelectric and thermoelectric transducers are both constant impedance devices, reflecting a characteristic current-voltage profile (Figure 5). Beyond that similarity, piezoelectric devices typically exhibit output impedance in the 10 kΩ to 100 kΩ range with output dependent on its resonant frequency as noted earlier. Thermoelectric generators on the other hand, exhibit much lower output impedance, typically less than 500 Ω. 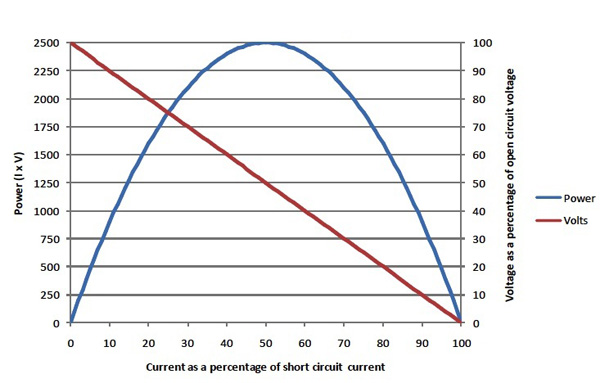 Figure 5: Although exhibiting significant differences in electrical characteristics, piezoelectric and thermoelectric transducers are constant-impedance devices with a similar I-V curve (Courtesy of Cymbet).

For these devices, maximizing power output means maintaining the load on the transducer at its maximum power point (MPP). Operation at loads significantly away from MPP result in a significant reduction of power from the transducer, and power available to charge local energy devices or the load directly. For stable environments, MPP is typically found at one-half the transducer's open-circuit voltage value.

More exotic energy sources such as glucose fuel cells can exhibit dramatically different curves depending on composition and operating conditions, resembling a constant impedance source with a bell-shaped power curve in some cases and resembling a non-linear source, such as a photovoltaic cell with a highly non-linear power curve.

In practice, MPP is a dynamic characteristic dependent on operating conditions including temperature. For maximum power extraction, engineers can turn to available devices intended specifically for energy-harvesting applications. Devices such as the Cymbet CBC915 energy processor offer sophisticated algorithms for maximum power point tracking (MPPT) that constantly evaluate transducer energy output and automatically search for a new MPP if output levels begin to fall. Designed as a single-chip solution for energy harvesting, the CBC915 combines its MPPT features with charge management functionality for charging and protecting thin-film storage devices such as the Cymbet CBC050 and other members of the Cymbet EnerChip™ family.

While devices such as the CBC915 support dynamic MPPT, other devices allow engineers to program the transducer output voltage at a fixed level using resistors. The Linear Technology LTC3105 DC/DC converter is designed specifically for thermal energy-harvesting applications and allows engineers to program MPP with a single resistor. In turn, the device dynamically regulates the average inductor current to prevent the input voltage from dropping below the MPPC threshold.

Linear also offers its LTC3588-1 for piezoelectric energy harvesting, integrating a full-wave bridge rectifier capable of extracting power across the full range of mechanical excursions of a piezo transducer (Figure 6). Designed to interface directly to a piezoelectric device, the LTC3588-1 requires only a few external components to create a complete power supply. The device rectifies the voltage waveform, stores harvested energy on an external capacitor CSTORAGE, and delivers a regulated output to the load. 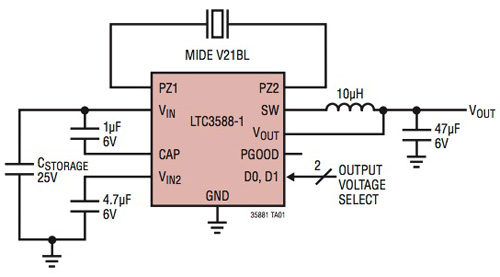 With the growth in interest and demand for body-area network devices, electronics manufacturers face a similarly growing need for reducing or eliminating battery replacement, while ensuring long-duration operation of increasingly complex applications. To meet these conflicting requirements, systems designers can exploit a broad range of kinetic and thermal energy sources associated with everyday activities. By paying careful attention to transducer characteristics, engineers can extract sufficient power from these ambient sources to power a broad range of BAN-oriented battery-less devices.