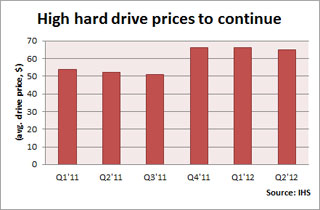 The merger among the major hard drive manufacturers means average prices for HDDs will remain high until at least 2014.Higher prices for hard disk drives (HDD) resulting from supply disruption because of severe flooding in Thailand last fall will continue through 2014, although full drive production will resume in the third quarter.

The floods in Thailand last October forced the shutdown of several HDD factories and the facilities of drive component manufacturers. As a result, there was a 29 percent reduction in the number of drives produced in Thailand in the fourth quarter.

The disruption in supply caused average prices for hard drives to rise to $66 in the fourth quarter, compared to $51 in the third quarter, according to researcher IHS.

The average HDD price held steady at $66 in the first quarter and is expected to drop marginally to $65 in the second, IHS reported.

The good news is that drive production in Thailand continues to increase and will reach pre-flood levels in the third quarter, the researcher said. Shipments rose by 18 percent to 145 million units in the first quarter and by 10 percent to 159 million in the second quarter.

Despite exceeding pre-flood shipment levels in the third quarter, pricing is expected to remain inflated because of recent mergers which have given HDD manufacturers more pricing leverage than they did in 2011, said Fang Zhang, analyst for storage systems at IHS. Also contributing to higher-than-average prices for drives is increasing demand for storage of media content and cloud storage for social media corporate data. PC sales are also projected to climb in 2012 resulting in more drive demand.

With the two “mega-mergers between Seagate/Samsung and Western Digital/Hitachi GST,” the two top suppliers held 85 percent of HDD market share in the first quarter 2012, said Zhang.

“The concentration of market share has resulted in an oligarchy where the top players can control pricing and are able to keep prices at a relatively high level,” he said.

Concerned about hard drive availability, many PC OEMs signed long-term agreements with drive manufacturers in the second quarter. The agreements guarantee drive shipments to OEMs, but lock in prices that are about 20 percent higher than pre-flood levels, according to IHS.

Even if all the OEMs stop entering into long-term agreements by the end of 2012, it would take about four quarters with a 6 percent sequential decline in HDD average prices to reach the pre-flood pricing level.