Computer hardware will post the highest growth rate of all IT categories.

Worldwide IT purchasing is forecast to total $3.6 trillion in 2011, a 5.6 percent increase from $3.4 trillion in 2010 with computer hardware posting the highest growth rate of four IT categories, according to an updated forecast from researcher Gartner. 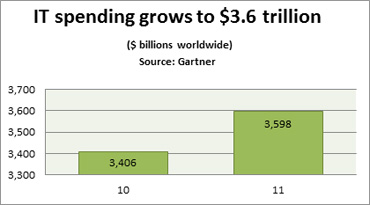 Companies will increase their buying of computers, telecommunications equipment and software in 2011.Purchasing of hardware by companies will increase 9.5 percent in 2011 to $409 billion, compared to $374 billion in 2010, according to Gartner. Enterprise software will have the second highest growth rate of 7.6 percent, as revenue in that category will total $255 billion in 2011.

Gartner estimated that IT services would grow five percent to $824 billion in 2001, while telecommunications IT would increase 4.9 percent to $2.1 trillion.

The impact on IT markets in Japan after the recent natural disasters is not yet known. The forecast was mostly completed prior to the earthquake and tsunami in Japan, according to Gartner.