Getting Real with Real-Time Control

Industrialization continues to shape the modern world by bringing an increased level of automation in all areas of life, be it in manufacturing, commerce or leisure.

Industrialization continues to shape the modern world by bringing an increased level of automation in all areas of life, be it in manufacturing, commerce or leisure. Empowering these labor-saving devices are a plethora of electrically powered workhorses: the motors. Although they all harness and exploit the same electro-magnetic phenomena, electric motors come in many forms. The recent trend, however, is to use low cost topologies such as synchronous AC and brushless (and often sensorless) DC motors. It is the diversity of motor design that creates the efficiency trade-off; the power they are required to produce is measured against the power they consume to produce it. As industrialization spreads, the inevitable environmental impact means that this trade-off is attracting more attention. For domestic, commercial and light industrial applications, arguably where motor use is increasing most rapidly, the trend is to balance this trade-off using the lowest cost options without compromising environmental legislation and social concerns.

Many established motor designs, such as asynchronous AC motors or brushed DC, need only rudimentary control (Figure 1). Typically, however, the cost of a motor is inversely proportional to its overall efficiency. So, while autonomous motors may not require external control circuits, they typically return only modest power efficiency. By introducing ‘intelligent control’, it is possible to reduce the build cost even further, while still driving up overall power efficiency. To fully exploit this benefit, manufacturers are implementing control circuitry using more and more powerful microcontrollers, enabling them to get the best performance out of the simplest and therefore most cost effective motor topology. Shifting the cost away from the motor design and towards the control electronics has given microcontroller manufacturers an opportunity to develop entire families that target the specific needs of this application area: the digital signal controller.

The need for digital control

Digital signal controllers — or DSCs — are essentially an extension of the classic microcontroller architecture to include peripherals specifically targeting motor control and, more recently, a level of digital signal processing (DSP). While microcontrollers (MCUs) are typically very good at control functions, their relatively modest processing speeds make them less applicable to the ‘real-time’ demands of motor control, particularly when tasked with additional functionality. This has led to many manufacturers implementing a two-chip solution; using an MCU for control functions (such as checking safety switches, driving user displays and monitoring consumables), while the DSP runs an optimized algorithm to control the motor.

While this approach allows some flexibility when choosing the MCU and DSP, it can be less than optimal. Many low cost motors — such as brushless DC motors, particularly when sensors are not used — require the DSP to monitor instantaneous currents or back EMF (electromotive force) through motor coils, using this information to determine the stator position and compute the drive current needed on the subsequent phase. In real-world applications, where the motor load may change significantly and rapidly, this means the DSP must be as closely coupled as possible to the high speed analog-to-digital converters (ADCs), and fast and flexible pulse width modulators (PWMs), in order to maximize efficiency. In practice, the ADCs and/or PWMs will be on the MCU, as few DSPs integrate these peripherals. This close but discrete coupling not only requires a high performance MCU, but also relies on fast inter-chip communication. As the MCU will often be the ‘weakest link’, this can put an artificial limitation on the performance of the DSP and, as a result, the overall control solution.

By integrating the DSP with the MCU, this limitation is avoided and it is this scenario that many MCU manufacturers now favor. As with MCUs in general, the number of possible solutions is large and as MCU manufacturers compete for a significant share of the growing market, they continue to make greater efforts to differentiate their product offerings.

Despite an increasing penetration by the ARM architecture into the MCU market, it remains highly fragmented. This means there is still room for proprietary architectures with unique features that ensure they remain competitive, even in emerging application areas such as real-time motor control.

One of the more established providers of Digital Signal Controllers (DSCs) is Microchip, with its dsPIC family. It combines its powerful MCU core with DSP functionality in a single, 16-bit processor, tightly coupled with motor control peripherals and, in some options, capacitive touch control and graphics drivers. The performance offered by dsPIC devices ranges from 16 to 60 MIPS (million instructions per second — the default metric for DSP performance), all of which are stocked by Hotenda. Microchip has also recently announced the latest additions to its DSC family, increasing performance to 70 MIPS.

Another example of how a proprietary architecture can be tuned to achieve maximum performance for targeted applications comes from Infineon. In March 2011, Infineon announced the latest additions to its XE166 family of Real-Time Signal Controllers, adding the XE16xU and XE16xL variants, which are targeted at low end and ultra-low end motor control applications respectively. They join a wider portfolio already in stock and available from Hotenda, and the overall family is closely optimized for motor control applications (Figure 2). Employing Infineon’s proprietary 16-bit processing engine with an efficient MAC unit (multiply and accumulate — the defining feature of a DSP), the latest additions are aimed at applications that may have, to date, needed either a high-end 8-bit MCU or a low-end DSP, such as three-phase brushless DC (BLDC) motor controllers. 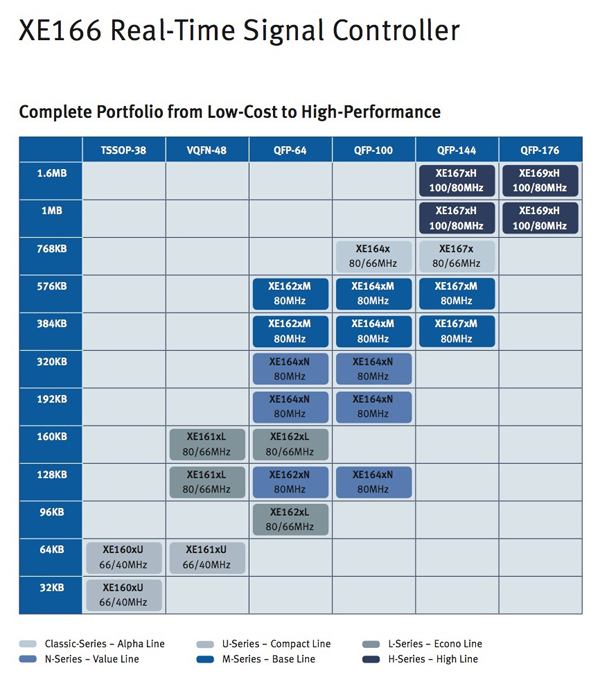 Proving that the ARM architecture is continuing to make inroads to applications previously dominated by proprietary architectures, Atmel has recently announced its entry in to the DSC area with an ARM Cortex-M4 based offering in the shape of its SAM4 family. It will join the SAM3 family, which is already available from Hotenda.

Atmel claims that many members of the SAM4 family will make use of the version of ARM’s Cortex-M4 core with floating point DSP extensions, a feature that allows it to target the DSC market. The move confirms Atmel’s commitment to the DSC market, which it first made with the AVR UC3C MCU family released in 2010.

Powerful and optimized hardware architecture is only part of the solution when developing motor control applications. Equally important is the software. Optimized DSCs allow for more efficient and capable algorithms, but their development is by no means simple. For this reason, vendors must make further investment in the form of software libraries. Using an industry-standard architecture such as the Cortex-M4 means the SAM4 family can make use of ARM’s own DSP library, which Atmel says will boost the execution speed of floating point instructions by ten times when compared with its SAM3 family, based on the Cortex-M3.

While the SAM4 family is not expected to be available until 2012, volume production of Infineon’s XE16xU and xL families has now started and will become widely available in the near future. The software solution Infineon has chosen is based on its existing tool chain, which encompasses an automatic code generator called the Development Application Virtual Engineer (or DAvE), which is part of its integrated development environment, developed in collaboration with EDA specialist Altium. A range of daughter boards is available for the Altium development platform from Hotenda (Figure 3). 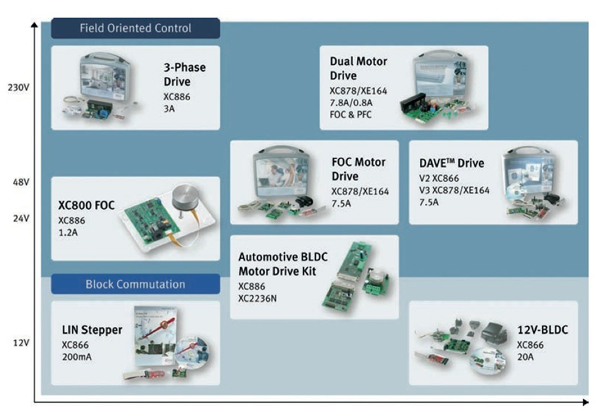 Similarly, Microchip has an extensive and free-to-use software library for motor control applications, which provides a range of specialist algorithms optimized for its dsPIC (and PIC24) families (Figure 4). It, too, is supported by development kits, which make use of daughter-boards supporting its development platform, the dsPICDEM, also available from Hotenda.

The vast range of MCU variants now available reflects the diverse applications they address, but almost uniquely, it is the 16-bit devices which continue to dominate the motor control segment of the market, providing the right mix of performance and cost. While ARM’s Cortex-M4 will undoubtedly create waves, there is no doubt that there is now an optimized solution for almost every single motor control solution, be it a stepper motor, BLDC, or synchronous AC.