There are some applications, such as double-ended sensors and audio amplifiers that require a negative voltage for operation.

One such solution using a traditional synchronous step-down regulator is provided by Texas Instruments in an application note entitled “Creating an Inverting Power Supply Using a Synchronous Step-Down Regulator"1. It shows you how to generate a negative voltage from a positive input voltage to the synchronous buck regulator.

There are some design restrictions that the engineer must observe in order to create an inverting supply from a positive rail. As shown in Table 1, the maximum allowable output voltage is limited by the maximum voltage across the device VDEV between the input pin and the ground (GND) pin on the IC minus the maximum input voltage VIN (max). Because the MOSFETs are internal to the IC, the maximum load current cannot be more than the maximum current through the internal switches. 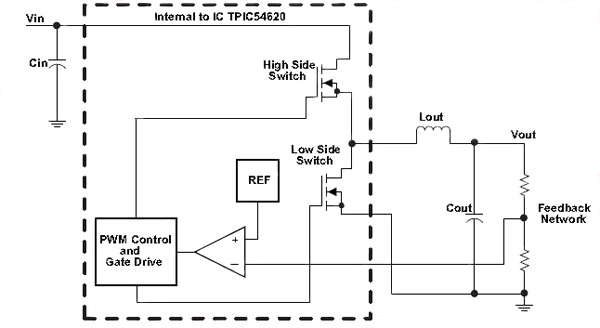 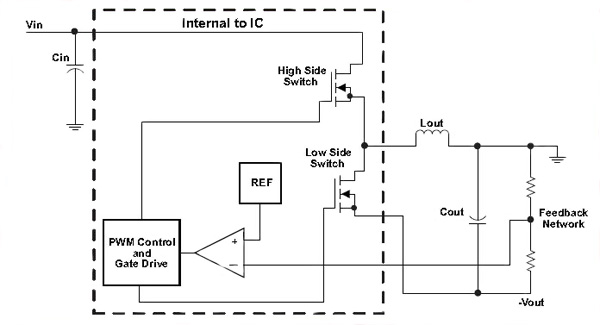 In fact, TI illustrates the concept by implementing the above technique using its chip TPS54620, which is a 4.5-V to 17-V input, 6-A synchronous step-down converter belonging to TI’s SWIFT family. The key electrical specs for this design are depicted in Table 2. While the complete inverter solution using the TI chip is shown in Figure 3.

Table 2: Key specs for the inverter circuit in Figure 3.

The VOUT for this inverter circuit is -5 V. Hence, using Equation 1, it is determined that the maximum input voltage for the power supply can be as high as 12 V. While the minimum input voltage VIN (min) for the inverter supply must be greater than the minimum device voltage VDEV (min). For TPS54620, the VDEV (min) is 4.5 V. Hence, the input range of 4.5 to 5.5 V, as given in Table 2, is easily supported by the TPS54620-based inverter circuit in Figure 3.

The TI application note also shows you how to calculate other parameters for this inverter circuit, such as duty cycle, output current, operating frequency, inductor value, output and input capacitors, and power dissipation.

Likewise, a new generation of Linear Technology’s high-voltage synchronous step-down converters, such as the LT3845, make it possible to implement positive-to-negative converters for a variety of applications. Linear’s design note 433 entitled “A Positive-to-Negative Voltage Converter Can Be Used for Stable Outputs Even with a Widely Varying Input”2 describes a design example that shows how to generate negative voltage from a positive input to synchronous step-down controller LT3854. In this example, the synchronous controller converts 9- to 15-V wide input to -12 V at 30-A output.

Charge pumps offer a simple, inductorless DC/DC converter solution that can step up, step down, or invert an input voltage for a variety of low-power, low-cost applications. By eliminating the inductor, these switched-capacitor based converters provide compact simple designs for converting positive input to negative output.

Another Application Note (36594) from Maxim presents a charge pump converter circuit that produces -10 V at no load with more than 200 mA from +5-V input. The charge pump IC used in this circuit is MAX889 as shown in Figure 4. It inverts the input voltage and doubles the resulting negative output at the same time. For that, it uses two Schottky diodes and the two capacitors at the output to produce a higher output voltage as shown in the figure. 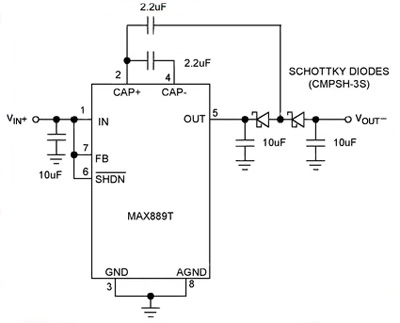 For some applications in which only a positive supply is available, the system must generate a negative voltage (sometimes of even larger magnitude than the positive rail). This article discussed how to create a negative power supply using either a switching regulator (buck) or a charge pump. Schematics were presented along with equations, so that designers can determine the best solution to meet their own requirements. The application notes referenced also include sample design implementations along with captured waveforms. For more information on the parts mentioned, use the provided links to access product information pages on the Hotenda website.
References