As these DPA-based servers and workstations get smaller and smaller with time, so must the isolated DC/DC converters or bricks that enable the IBA scheme in these systems. A variety of brick formats, which include quarter- and eighth-bricks, are being deployed as intermediate bus converters for IBA needs.

Last year, we saw a number of manufacturers offering eighth bricks with the power of a quarter brick1. Some of these manufacturers were CUI, GE Critical Power, Murata Power Solutions, and Vicor, to name a few.  Incidentally, all of them were analog-control-based bricks incorporating silicon power MOSFETs in the output-power stage; and the output voltages from these silicon-based eighth bricks were non-regulated. Vicor was the only eighth-brick supplier providing 500 W capabilities from an input-voltage range of 50 to 55 VDC. This was the most achieved in the eighth-brick format, which measures 2.30 x 0.9 x 0.38 inches (58.4 x 22.9 x 9.5 mm). However, the 12 VDC output of its eighth-brick IB048E120T40N1-00 is non-regulated, soft-switched with an isolation of 1500 V between input and output. Theoretically, the output power is 480 W as the maximum-rated output current is 40 A at 12 V.

To keep the switching losses to a bare minimum, Vicor’s eighth brick uses a proprietary transformer-based series resonant topology called Sine Amplitude Converter. As a result, it can switch at 1 MHz while keeping switching losses low and passives smaller. The result is very high efficiency at full-load while maintaining good efficiency across load variations. The product data sheet specifies a peak efficiency of 98 percent at an ambient temperature of 25°C (Figure 1). This peak performance is at mid-load current of 20 A with 48 V input. At full-load with the same input of 48 V, the efficiency drops to around 97.5 percent and at 10 percent of the load it drops to 94 percent. 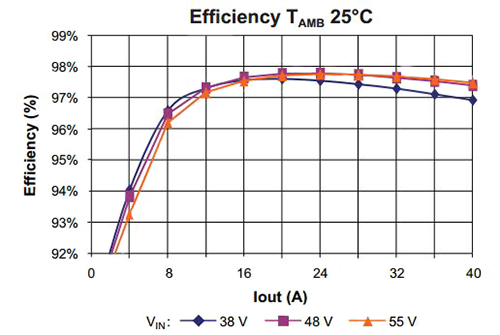 The product data sheet indicates that at higher ambient temperature of 55°C, the peak efficiency drops to 97.5 percent, indicating that the performance is high even at high-operating temperature. A similar low drop is seen at the full-load. Because some DC buses operate at less than 12 VDC, Vicor’s eighth bricks also offer 48 VDC to 9.6 VDC conversion at 500 W output. A typical 500 W part with 9.6 VDC output is IB050E096T48N1-00. All the eighth-brick converters belong to the maker’s VI Brick IBC family.

Now, Efficient Power Conversion Corp. or EPC, has taken the gallium-nitride (GaN) route to bring the benefits of wide bandgap (WBG) devices to isolated eighth-brick formats.  It is, in fact, the first company to do so. At the recent Applied Power Electronics Conference and Exposition (APEC) 2015 in Charlotte, North Carolina, EPC introduced a GaN-based 500 W eighth-brick DC/DC converter demo board, the EPC9115. However, unlike Vicor’s silicon-based eighth brick, the GaN-based EPC9115 offers a fully regulated 12 VDC output at 42 A with input voltage range of 48 VDC to 60 VDC. Furthermore, EPC’s GaN-based EPC9115 uses a conventional hard-switched PWM design with 300 kHz switching frequency. The enhancement-mode GaN (eGaN) FETs used in this design are 60 V, 2 mΩ EPC2020, and 80 V, 2.5 mΩ EPC2021 in a full-bridge configuration, as shown in Figure 2. The eGaN FETs are driven by Texas Instruments’ LM5113.

According to EPC9115 designer John Glaser, who is also EPC’s director of products, the design of an eighth-brick converter using soft-switching techniques is more complex, including its control. However, employing conventional PWM hard-switched topology makes design and control simple, notes Glaser. Aside from eliminating the series capacitors at the output, the full-bridge also helps to spread the heat across the four transistors, notes Glaser. Furthermore, the eGaN-based eighth-brick converter uses a 4:1 integrated planar transformer. The transformer is close to optimum to minimize core losses.

Besides using the conventional hard-switched topology, the eighth-brick EPC9115 design uses a voltage-mode control incorporating a Microchip 16-bit digital-signal controller (DSC), such as DSPIC33FJ06GS101A-I/P, which offers a true DSP capability with the manipulation of an MCU. Plus, it offers a number of peripherals for real-time response in control-loop designs.  The DSC is supported by Microchip’s software libraries and reference designs for platinum-rated digital power supplies. The controller’s on-chip memory allows the user to configure the eighth brick in software and also monitor a variety of input and output parameters.

The EPC9115 eighth brick offers peak efficiency of 96.5 percent at full-load, which remains fairly high even when the load is as low as 5 A (Figure 3). However, peak efficiency of the GaN-based eighth brick is a point below the silicon counterpart. Although the losses in GaN devices are low, the losses in the magnetics are relatively higher and need further improvement, explains Glaser.

According to EPC, the EPC9115 is offered as a demonstration board to showcase the high performance that can be achieved in building eighth bricks using eGaN FETs and an eGaN driver in a conventional topology. Although the 500 W DC/DC converter fits in an eighth-brick footprint, the demonstration board is oversized to allow connections for bench evaluation (Figure 4). There are various probe points to facilitate simple waveform measurements and efficiency calculation. The board is intended for bench evaluation with low-ambient temperature and forced-air cooling.

Figure 4: The EPC9115 is a demonstration board for the eGaN FET-based 500 W isolated eighth-brick DC/DC converter with fully regulated 12 VDC output at 42 A from an input range of 40 to 60 VDC.