The advantages of gain blocks explained along with how to leverage available parts to allow maximum transmission range while preserving receive sensitivity.


The term “radio” means a lot more now than it did in the past. Early radio transmitters were little more than oscillators that would simply modulate signal information onto a carrier via amplitude, frequency, or phase. Simple single-chip or transistor transmitters and receivers were designed and used, and power transistors could provide enough power to satisfy most needs. Today, it is commonplace for the average person to have a personal, mobile device that routinely uses several RF transceivers.

These modern radios carry with them a high expectation level of performance and reliability. Our wireless links have to work as well as a wired link. This means that many subsystems operating in the background need to be cranking away while our receive signals are scrutinized and decoded.

With the advent of the digital age, even analog signals are processed in digital form. Digital systems, especially dense and with multiple clocks, can be noisy, and adding high-power transmitters can also reduce sensitivity to received signals.

Other requirements, such as frequency hopping, spread spectrum, protocol preambles, CRC, ECC, ACK/NOACK, just to name a few, make simple transistor RF links obsolete. As a result, RF links require more complex chips than ever before. For the engineer, it is like carrying a heavy stone on your back that keeps getting heavier every generation as more complexity is added.

The design process has experienced increased levels of complexity, too. Multiple ground planes need to converge. The digital ground plane can be fraught with switching noise. An analog ground plane should be as quiet as possible so sensors can pass reliable levels to sensitive A/D stages of a data acquisition system. The RF ground plane also should strategically protect low-level radio signals while maintaining consistent transmission line impedances. This imposes greater thought in split power and ground plane design as well as in functional partitioning when laying out a circuit board.

This article looks at discrete RF gain block stages that can take preformed complex RF signals from modern high-end radio chips and boost levels to achieve higher range and reliability. In addition, while it is true that power output levels for specific bands and protocols are dictated by government agencies, if we want to take full advantage of the power levels we are allowed to transmit, gain blocks can make that possible. All parts, datasheets, tutorials, and data referenced here can be found on the Hotenda website.

The increased amount of transmit power modern digital radios are allowed to use is a mixed blessing. Due to spread spectrum technology, radios can emit up to 1.5 W of transmit power compared to the 10 mW of transmit power older narrow-band AM and FM transmitters were permitted. This is good for increasing range and signal reception reliability, but adds more power requirements to the design, and another potentially noisy source.

With so much sensitivity to low-level signals, and ever-growing functional integration, there is only so much power complex radio SoCs can handle. The inverse-squared power law would suggest that moving the antenna to a quiet point could lower noise from digital systems, thus optimizing reception.

As a result, RF switches (see the TechZone article “RF Switches Add Flexibility”) can be used to direct radio signals away from the noisy SoC to a more optimized location and permits use of multiple antennas (Figure 1). For transmitted signals, gain antennas can increase range and power output, but it is gain blocks that take the raw RF for transmission and jack it up to higher levels to achieve the maximum power allowed per their conformed standards. 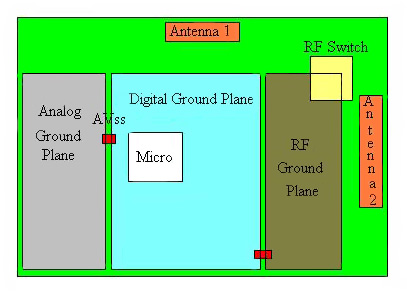 There are many advantages when moving a higher-power transmitter to a remote or periphery location on a circuit board. A differential signal can cleanly pass low-level radio signals across the board to an edge-mounted PC board antenna, an external antenna connector, or both. The periphery is the best shot at a clear path for transmitting (and receiving) signals, and allows a little more control when choosing enclosure materials so as not to attenuate performance. In addition, redundant antennas can be used to improve transmit coverage range, as well as receive sensitivity in multiple planes.

Gain blocks have emerged to tackle both general purpose and band-specific needs. In both cases, they take low-level RF signals and provide power gain to antennas with very specific characteristics. Some manufacturers such as Analog Devices make a series of gain blocks aimed at both specific designs as well as general-purpose and wideband applications.

The Analog Devices AD8353ACPZ-REEL7 is a basic input/output two-stage feedback amplifier in a compact 8-VFDFN package with exposed pads. It targets cellular, LMDS, and MMDS designs. Good from 1 MHz to 2.7 GHz, it is a fairly wideband amplifier capable of running from standard 3 or 5 V power supplies and provides a fixed 20 dB gain. Its compact size and simple “pass-through” layout make it easy to place with its own ground plane (Figure 2).

Figure 2: Passive components can be used to couple single-ended output to the antenna in either single-ended or differential configurations.

Another, similar example is the Analog Devices ADL5530ACPZ-R7, which supports CDMA2000, W-CDMA, GSM, and cellular. Look closely and you will see that it is good from 0 Hz up to 1 GHz, making it ideal for 928 MHz ISM band designs, as well as lower frequency bands for medical implants, industrial control, and so on. The higher-frequency still-reasonably-wideband ADL5542ACPZ-R7 handles 50 MHz to 6 GHz and targets cellular and CATV designs.

Analog Devices’ fairly new ADL5610, ADL5611, ADL5544, and ADL5545 parts extend the wide frequency range down to 30 MHz while maintaining the high-frequency 6 GHz top end. They differ in gain levels and are all in a very-compact SOT89-3 package. Analog Devices provides an RF-IF Amplifier Product Training Module on the Hotenda website.

Avago Technologies also makes an RF Gain Block chip with its MGA-30689-TR1G flat-gain high-linearity SOT-89 part. Designed to work from 40 MHz through 3 GHz, it encompasses all the current 2.4 GHz protocols and standards in a single part that also features a pass-through layout (Figure 3). Requiring a single 5 V supply, it features a flat 14 dB (±0.5 dB) gain response through the 40 MHz to 2.6 GHz ranges. 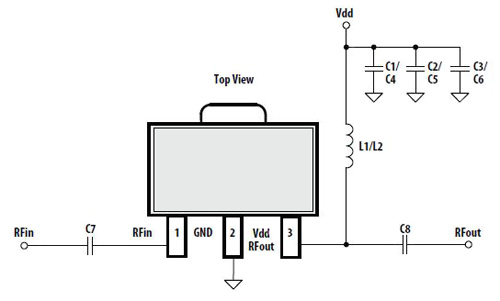 Hittite also plays in this arena and offers a few parts of interest. Take, for instance, the comparable SOT-89 wideband HMC311ST89E, which is good from 0 Hz to 6 GHz. Its 50 Ω gain stage is cascadable to achieve higher output levels for non-standards-regulated designs. If offers 16 dB of gain using a Darlington output pair, which significantly reduces current draw compared with other technologies.

Hittite also makes an “ultra-high”-frequency (0 to 10 GHz) gain block with its 2 x 2 mm GaAs pHEMT HMC788LP2E gain-block stage. Also cascade-able with 50 Ω impedances, this part is designed to directly drive the local oscillator port of a single- or double-balanced mixer with up to 20 dBm output power. It also uses a 5 V supply and Darlington feedback pairs exhibiting excellent gain stability over temperature. 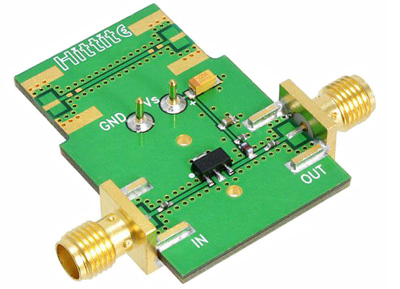 On the receiving end

It is interesting to note that gain blocks are not only used for transmitter stages, but also can be employed for purposes related to the receive chain. A good example is the Linear Tech LTC6430BIUF-15#PBF. This part conditions the raw receive data and optimizes it for very-high-speed differential A/D converter stages (Figure 5). Ideal for software defined radios (SDR) and direct DSP-type of demodulation schemes such as Orthogonal Frequency Division Multiplexed (OFDM), this part is offered in a 24-pin QFN package that can directly couple to an external A/D or to a microcontroller’s high-performance A/D stages. Note that the 4 x 4 mm size is still fairly small, and can be used in handheld and portable equipment (but it draws 800 mW of power).

In summary, this article discussed why gain blocks are a good technology to know about and showed you how to leverage available parts to allow maximum transmission range while preserving receive sensitivity. As we have also noted, RF gain blocks further provide engineers with more flexibility and freedom when it comes to laying out the physical PC board that will house your designs. For more information on the parts mentioned here, use the links provided to access product information pages on the Hotenda website.