Learn about the piezoelectric effect and the need, function, and design of piezoelectric shock and vibration sensors using components from Parallax and Mide.


The piezoelectric sensor is used for flex, touch, vibration and shock measurement. Its basic principal, at the risk of oversimplification, is as follows: whenever a structure moves, it experiences acceleration. A piezoelectric shock sensor, in turn, can generate a charge when physically accelerated. This combination of properties is then used to modify response or reduce noise and vibration.

Why is that important? Because vibration and shock can shorten the life of any electronic and electromechanical system. Delicate leads and bond wires can be stressed, especially after exposure to long term vibration. Solder joints can break free and PCB traces can ever so slightly tear from impact and impulse shock, creating the hardest type of system failure to debug; an intermittent failure.

This article discusses piezoelectric shock and vibration sensors and sensor technology, focusing on available products (all parts mentioned here can be found on the Hotenda website — links are provided), as well as design issues and design techniques.

The piezoelectric effect was discovered by Pierre and Jacques Curie in the latter part of the 19th century. They discovered that minerals such as tourmaline and quartz could transform mechanical energy into an electrical output. The voltage induced from pressure (Greek: piezo) is proportional to that applied pressure, and piezoelectric devices can be used to detect single-pressure events as well as repetitive events.

Still, the ability of certain crystals to exhibit electrical charges under mechanical loading was of no practical use until very-high-input impedance amplifiers enabled engineers to amplify the signals produced by these crystals.

Several materials can be used to make piezoelectric sensors, including tourmaline, gallium phosphate, salts, and quartz. Most electronic applications use quartz since its growth technology is far along, thanks to development of the reverse application of the piezoelectric effect; the quartz oscillator.

Sensors based on the piezoelectric effect can operate from transverse, longitudinal, or shear forces, and are insensitive to electric fields and electromagnetic radiation. The response is also very linear over wide temperature ranges, making it an ideal sensor for rugged environments. For example, gallium phosphate and tourmaline sensors can have a working temperature range of 1,000°C.

The physical design of the piezoelectric sensor depends on the type of sensor you wish to create. For example, the configuration of a pressure sensor, or a shock (impulse) sensor, would arrange a smaller, but well-known mass of the crystal in a transverse configuration, with the loading deformation along the longest tracks to a more massive base (Figure 1). This assures that the applied pressure will load the base from only one direction. 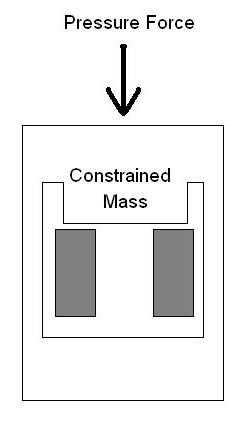 Figure 1: A constrained mass is allowed to deform the crystal sensor in one axis. This configuration is good for force and pressure.

An accelerometer based on the piezoelectric effect, would use a known mass to deform the sensing crystal part in either a positive or negative direction depending on the excitation force (Figure 2). It should be noted that you need a known modulus of elasticity in the sensor substrate. 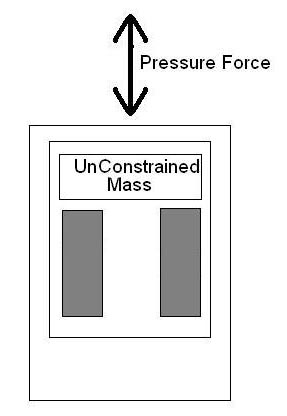 Figure 2: Because the modulus of elasticity is known for a substrate material, the unconstrained mass is allowed to move with vibration making this type of piezoelectric sensor ideal for detecting shock and vibration.

Piezoelectric sensors require some precautions when connecting to sensitive electronic components. First and foremost, the voltage levels created by hard shock can be very high, even around 100-V spikes.

More than likely, an op amp will be used to interface these sensors to an A/D converter, either discrete or on a microcontroller. One tip is to choose a high-input-impedance op amp to minimize current. One possible candidate is the Linear Technology JFET input dual op amp. It has 10¹² Ω input resistance and a 1 MHz gain bandwidth product, good enough to easily handle the vibration ranges of piezoelectric sensors.

Another suitable part is the TLV2771 from Texas Instruments. This rail-to-rail low-power op-amp also has a 10¹² Ω differential input resistance and a 5 MHz unity-gain bandwidth. Signal conditioning in a single stage can prepare the input from the shock sensor directly into an A/D converter (Figure 3). 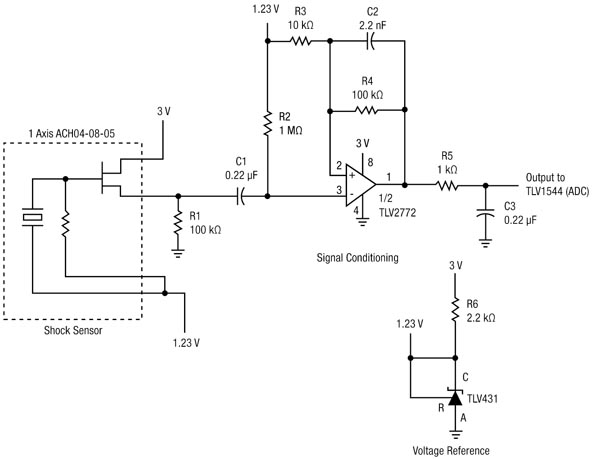 Figure 3: Op amps such as the TI TLV2772 feature high input impedances to help minimize current from the potentially high-voltage inputs from the piezoelectric sensors.

Another tip is to attenuate the input signal and use the op amp’s gain to bring into the desired range. Be aware that you may need snubbing protection on the inputs of the op amp, especially if the design could be subjected to harsh hits.

Also note that you may think that a pressure sensor would generate only a positive voltage, but, in reality, the signal from the sensor can ring and introduce negative voltage spikes (Figure 4). This means that you may need to squelch negative voltage levels on the op-amp inputs, especially if using only a single rail power supply on the op amp. 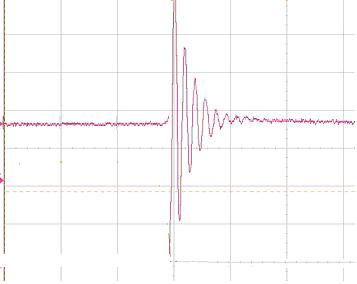 Figure 4: Care must be taken when using single rail op amps since shock can cause negative voltage spike ringing that can damage op-amp inputs if not squelched.

Parts for the design

Many off the shelf piezoelectric sensors are readily available to use in your designs. A case in point is the Parallax 605-00004, which is a piezo vibra tab sensor capable of acting as a switch, or as a vibration sensor (Figure 5). A polymer film laminate uses crimped contacts and features a sensitivity of 50 mV/g. 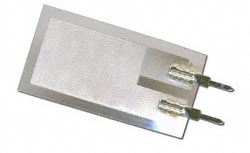 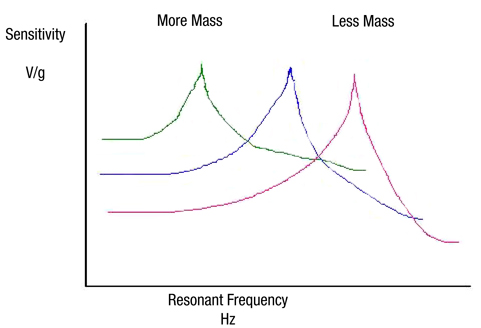 Figure 6: Loading a sensor with mass changes its resonant frequency and sensitivity in a predictable and repeatable way.

Another part worth considering is the Measurement Specialties 0-1002794-0 cantilever piezo film sensor. This is also a vibra tab sensor capable of hard mounting to a surface, floating in an axis of inertia, or mass loaded to prebias and calibrate. The output voltage swings can directly trip a FET or CMOS input, and a multiaxis response can be obtained by offsetting the mass center.

In addition to sensing vibration and shock, a piezoelectric device can also be used to extract ambient energy. Take for example the Mide V22BL, which is a hermetically sealed piezoelectric sensor capable of sensing from 26 to 100 Hz vibrations.

It can be evaluated using the company’s VR001 data logger, which is a portable rechargeable data logger that can measure acceleration and vibration in three axes (Figure 7). As a USB peripheral, it can be configured and have its data transferred to a PC or other USB host device. It can also be used to help you develop your own designs based on the piezoelectric sensors you choose. A Mide training module is available on the Hotenda website to help bring you up to speed quickly when starting a new design. 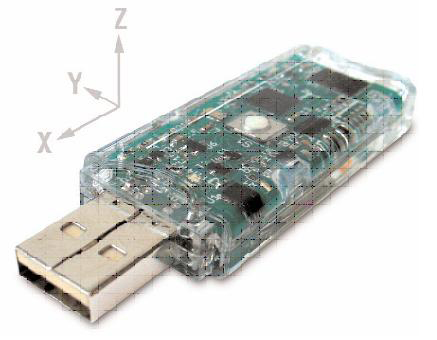 Figure 7: The USB plug in three-axis sensor can be used as a development tool and evaluation tool when learning or starting a new design.

Finally, before you select a piezoelectric sensor for shock or vibration duty, evaluate the criteria specific to your intended application (we’ve provided some examples here), then, spend some time with the manufacturer data sheets and use the links above to get further information from the product and technology pages on the Hotenda website.