Power management for telecom and computer applications has become a large market for the power supply industry.

In addition, some advanced models provide power-factor correction (PFC), hot-swap capability, active load sharing for N+1 redundancy, and many other features with built-in intelligence and flexibility. On-board microprocessors interfaces such as I⊃C, PMBus, and Ethernet are enabling real-time monitoring and dynamic digital control based on load levels or other set parameters. Standard power platforms can be easily modified to optimize performance or footprint for targeted applications where enhanced operation is needed.

Driven by market demand for better and faster processing capacities, data center servers are packing more computing performance in increasingly smaller form factors. As a result, their power consumption has increased substantially, while their performance per Watt has not kept pace. More power dissipation also means more heat, which requires better cooling, adding to the overall cost of the system.

The pressure to improve the power efficiency of power supplies in data center servers is tremendous because inefficient systems translate into an enormous amount of wasted energy and expense with no return benefits.

To meet such demands, power supply manufacturers have significantly improved the efficiency performance of AC/DC front-end modules used in these servers, as well as in telecom equipment. Typically, AC/DC converters offer peak efficiency of 80 percent or higher at high loads, a figure that drops significantly at low loads. In fact, even a cursory look at the datasheets of typical front-end modules shows that efficiency performance can drop by as much as 15 to 20 percent at loads below 30 percent. As described in a white paper entitled “Front-end technology takes on data center power” by Michael J. Kawa of Lineage Power (now GE Energy),¹ to conserve energy, data center servers operate typically at 20 to 30 percent of rated load. So they need AC/DC front-ends that can deliver high efficiency across all loads.

Combining improvements in power MOSFETs and semiconductor ICs with advances in design, topology and packaging, power supply makers have made great strides in this area of operation. In fact, to reduce power losses, these designers are using better materials in the main transformer and output choke, with improved internal bias and fan usage. In addition, they are using higher switching frequencies to minimize the size of passive components.

The cumulative result of these improvements is a high-performance AC/DC front-end capable of delivering efficiencies of 90 percent or better over the entire operating range starting at light loads. As an example, let us look at CAR2548 from GE Energy, which was introduced a few years ago to meet AC/DC front-end requirements for a high performance LAN switch of a Fortune 500 company. Per the requirements of such a telecom system, it was offered in a 1U form factor with the ability to integrate into a custom power shelf housing of up to eight units. What’s more, it is scalable, which means it could be paralleled to deliver 48 Vdc up to 7,500 W in a redundant (N+1) architecture.

CAR2548 is rated for a maximum power of 2,500 W in a 1U package. Since it was designed for parallel redundant operation with active load sharing, multiple units could be mounted together to meet maximum power requirements. Also, because the operation of such a system would primarily be at light loads (20 to 40 percent), high efficiency was mandatory. It was designed to meet both efficiency and power density at rated input voltage and output power.

The unit is able to provide a power density of 27 W/in³ and baseline efficiencies of 92 percent at full load and >88 percent efficiency at 20 percent load. These values surpass the 80Plus Gold level efficiency standard.

Fast forward to 2012, and the low load performance of AC/DC front-end units has been further enhanced a few more percentage points. In addition, power density has also been improved. Today, AC/DC front-ends are touting 80Plus Platinum efficiency with power density of 30 W/in³. That means, these power modules can offer 90 percent efficiency at 20 percent load and 94 percent peak efficiency at 50 percent load (Figure 1). One module offering these achievements is GE’s CP2725TE with 2,725-W rated output power for telecom applications. 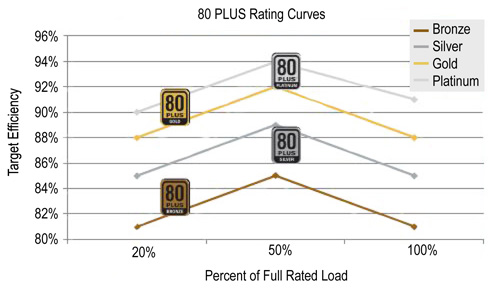 While 48 Vdc is the bus voltage for telecom systems, datacom servers are migrating toward a 12- and 24-Vdc bus. Hence, these applications need AC/DC front-ends with 12- and 24-Vdc outputs, but with the same benchmark performance of AC/DC front-ends developed for 48-Vdc telecom applications. For datacom front-end applications with 12 Vdc output, GE has readied models CAR2512 and CAR1612 with 2,500- and 1,600-W power outputs, respectively, at 12 Vdc. CAR2512’s efficiency is compliant with 80Plus Gold standard with 25-W/in³ power density, and CAR1612 is rated for 80Plus Platinum standard with a power density of 20 W/in³ (Figure 2). Designed for N+1 redundancy, all of these front-end units can handle a universal AC input voltage range of 84 Vac to 264 Vac. A similar part with 24-Vdc output is the CAR2024. 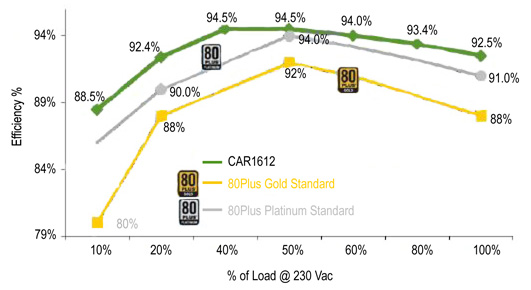 When used in server systems, GE’s calculations show that CAR1612FP can save $50.16 per year operating at 20 percent load over the 80Plus Gold standard. That translates into savings of over $5 million per year for a 100K blade center (Table 1).

In summary, recently the low load performance of AC/DC front-end units has made great strides. Today’s AC/DC converter modules are delivering conversion efficiencies of over 90 percent across all loads without compromising power density or cost. For more information on the products presented in this article, use the links provided to access product pages on the Hotenda website.