Force and acceleration sensors have been around for a long time, yet they continue to show interesting technology advances aimed at meeting new and evolving uses in military, industrial, consumer electronics, mobile, and medical applications.


Force and acceleration sensors have been around for a long time, yet they continue to show interesting technology advances aimed at meeting new and evolving uses in military, industrial, consumer electronics, mobile, and medical applications.

Early force transducers were hydraulic in nature, cylinders, diaphragms, and bellows that converted force to pressure signals read on oversized gauges. They were rugged, reliable, could be used in harsh environments, and data could be parsed out to several points simultaneously.

Force transducer systems then arose featuring pneumatic outputs easily integrated into process control uses with a universal 3-15 psi output. Not long thereafter, strain gauge sensors changed the way force was measured. The sensing element was based on the relationship between electrical resistance and elongation, twisting, or distortion of a conductive material from a rest position. When the conductors were bonded to pins, shafts, and plates, they created highly accurate, repeatable, and rugged-force transducer systems called load cells. Currently, they are used in weigh bins, scales, and for medical vital-sign measurements.

The most common dynamic force sensor today is the piezoelectric variety, which is a distant cousin to strain-gauge devices used for static force detection. Piezoelectric crystal force transducers are used with a charge amplifier to integrate the electric charges formed on a crystal surface to a given and measurable signal proportional to the force applied.

These sensors are unique because they are active sensors that do not require a power supply, and signals are easily generated without causing geometric changes to the force-measurement route. They have a high-frequency response capability that makes them suitable for dynamic measurement, but because of charge leakage from the charge amplifier, also called drift, they cannot perform static measurements accurately. They have small dimensions and can operate well within a wide temperature range, and are typically used to measure oscillation, impact, high-speed tension, compression, and torque.

This sensor is stiff, rigid, and has a high natural frequency and rapid-rise time, qualities ideal for use in machinery. They measure quick transient forces well, such as high-frequency vibration and metal-to-metal impact.

Another type of force sensor is the impact flowmeter, which measures the flow rate of free-flowing bulk solids. A material chute is used to direct the flow toward the sensor plate that moves in the horizontal plane, and the impact force is proportional to the flow rate. Impact force is measured using a linear variable differential transformer (LVDT) by sensing the horizontal plate deflection. The LVDT’s voltage output is converted to a pulse-frequency modulated signal, which in turn is transmitted as the flow signal to a control system. These flowmeters are used instead of weighing systems to measure and control the flow of bulk solids to continuous processes.

Despite its long history, there are still many new and interesting force-sensor applications emerging. Just last year, NASA’s Mars Rover Curiosity began to search for a perfect drilling point (Figure 1) on Mars. Force sensors were custom-developed for this application. 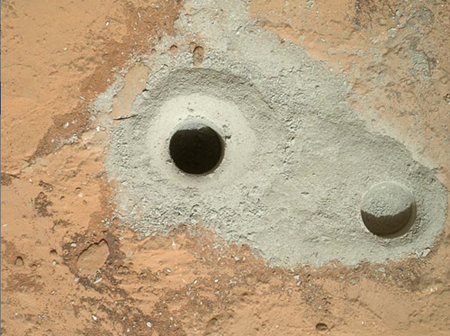 
In the rover’s drilling arm is a thru-hole load cell that measures the forces of the drill bit during drilling. A second sensor in the robotic arm provides feedback on the levels of torsion and force applied by the arm. The rover drilled multiple two-inch holes into bedrock for analysis.

Back on Earth, force sensors are teaming up with robotic vision for greater robotic manufacturing effectiveness. Using control provided by force sensors, robots in a manufacturing setting (Figure 2) perform precise fitting of machine parts, and are instrumental in life-cycle tests where applications require constant force. They also perform essential roles in grinding and in assuring multiple flat-surface alignments and precise gear teeth engagement. 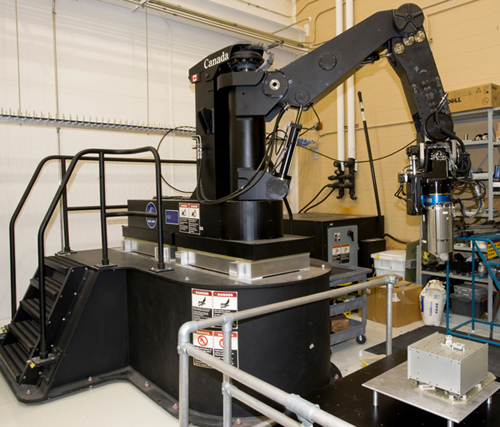 
For gear assembly, some systems are combining 2-D IR vision and force sensing. With vision sensing, the robot locates gears to assemble, and at a fixture equipped with a force sensor, the robot assembles the gear onto a shaft and changes grippers to place and assemble the other gear onto a shaft. The vision system enables the robot to locate gears in various sizes, while the force sensor provides precision measurement and feedback to the operation.

A wide range of force sensors are used in today’s industrial, medical, and consumer applications. Let’s look at a few notable examples.

The Interlink FSR 400 Series force sensors are part of a single-zone Force Sensing Resistor family. These FSRs are polymer thick film (PTF) devices that decrease in resistance when an increase in force is applied to the sensor’s surface. These sensors are used specifically for human-touch control in electronic devices in medical, industrial, robotic, and automotive applications, areas where much development continues. Simple and easy to integrate, the robust solution features up to 10 M actuations, an ultra-thin form factor, and a force sensitivity range of ~0.2 to –20 N. The device does not generate EMI and is not ESD sensitive.

The force sensor consists of a conductive polymer that predictably changes resistance following application of force to its surface. It is typically supplied as a polymer sheet or ink applied by screen printing. The sensing film consists of electrically conducting and non-conducting particles suspended in a matrix with particles that are sub-micrometer in size. Applying a force to the surface of the film causes particles to touch the conducting electrodes, changing the resistance of the film.

Advantages include their size (with a thickness typically less than 0.5 mm), low cost, and good shock resistance. They can, however, be damaged when pressure is applied over a long time period. They are also not used for high-precision applications as measurement results may differ by 10 percent or more.

In comparison, the FC2231 compression load cell from Measurement Specialties is a medium-compression force sensor that spurs the creation of new uses and markets based on cost and performance. The FC22 offers normalized zero and span for interchangeability, and is thermally compensated for changes in zero and span with respect to temperature.

The FC2231 incorporates proprietary Microfused technology using micro-machined silicon-piezoresistive strain gauges fused with high-temperature glass to a high-performance stainless-steel substrate. This eliminates organic epoxies used in traditional load-cell designs that do not age well. The FC22 measures direct force, and is not subject to lead-die fatigue failure common with competitive designs which use a pressure capsule embedded within a silicone gel-filled cavity. Used at low-strain levels, it provides an essentially unlimited cycle life expectancy.

Features include small size, low noise, high over-range capability, high reliability, unlimited cycle life expectancy, low deflection, low off-center errors, rapid response, and reverse-polarity protection. Current applications include: The FlexiForce Sensor (Figure 3) from Parallax is a piezoresistive force sensor capable of measuring up to 25 lbs. of force perpendicular to its sensing plane. In an electrical circuit, this sensor will act as a variable resistor, where the change in resistance is inversely proportional to the force applied. The change in resistance can be measured by a simple RC decay circuit, readable by any Parallax microcontroller.

The sensor features an active sensing area that is a 0.375 in. diameter circle at the end of the sensor. Conductive leads are easy to connect to a breadboard or through-hole area, and have a suitable output for A/D conversion, whereby 0 V is no force and 4.2 V is 100 lbs. 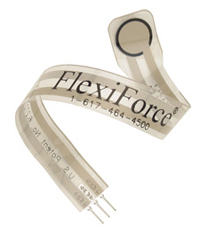 
This sensor measures both static and dynamic forces, features a simple RC circuit interface, has a versatile small size, and a thin, flexible printed circuit. The operating temperature is 15° to 140°F (–9° to 60°C) and its dimensions are 8.00 x 0.55 x 0.008 in. (203 x 9.53 x 0.208 mm). Applications include touchpads, alarm systems, airbag force measurements, and compression moldings.

The affordability and performance of these devices continue to increase dramatically, and as a result, force sensors are being employed well beyond their historical uses for repetitive tasks in clunky machinery applications. Potential apps now include such areas as intricate robotics, pumps, and medical electronics. For more information on the parts mentioned in this article, use the links provided to access product pages on the Hotenda website.