An overview of several automotive electronic subsystems and an explanation as to why Cypress’s F-RAM™ is the preferred solution for them.

Every year, automobiles become more dependent on electronics. Systems that were once mechanical have moved to electronic control units (ECUs). New systems for automobile safety and user entertainment are introducing an increasing complexity and a greater need for resources.

Automobile electronics are divided into independent, but connected, subsystems. Each subsystem is responsible for a specific task and can vary in scope and complexity from a simple radio control interface to a complex collision avoidance system. Nevertheless, these subsystems share some basic structures, for example, a microcontroller unit (MCU); a system bus interface in the form of CAN, OBD2, and in recent years Ethernet; input sensors; and output control logic. In addition, many subsystems need to store data instantly and continuously, which leads to performance and endurance design requirements—this is where Cypress’s Ferroelectric RAM (F-RAM) enters the picture. 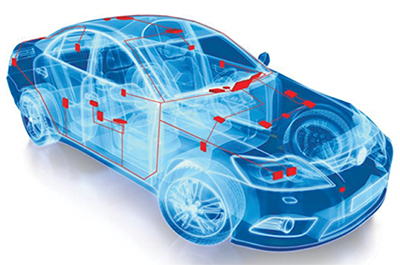 With F-RAM, systems are able to continuously store data at full bus speed and without the need for additional memory and overhead to manage the memories’ endurance. This is because F-RAM is instantly non-volatile, requiring no additional soak-time to store the information, and has a write endurance of 1014 where most EEPROMs and FLASH have less than 106.

While many systems need to store data, this article focuses on those that can take advantage of the benefits of F-RAM. For example, a simple radio ECU needs to store user presets data and the current state. The user presets are not likely to change frequently; in fact, after they are set they are more or less considered ROM. The current state, on the other hand, does change frequently, but it is not that important to restore it, so there is no value in adding nonvolatile memory to a simple radio system. That said, more advanced entertainment and navigation systems may have use cases that can take advantage of the features of F-RAM.

A battery management system (BMS) is an electronic control system that monitors and controls the battery systems in electric and hybrid vehicles. The key functions of the unit are to protect each battery cell from damage, prolong the life of each cell, and provide real-time energy distribution to the vehicle.

The BMS monitors the operational parameters of each battery cell independently. These parameters include cell voltage, cell current (both charging and draining), and cell temperature. Modern lithium- ion batteries have a very high charge density (energy storage) and a high current draw (low internal resistance), but require very tight operating control. One of the main causes of failure for lithium-ion cells is overcharging or undercharging. This makes the BMS important for any system that uses lithium-ion cells.

In modern electric and hybrid vehicles, the BMS interfaces with other vehicle subsystems such as the engine management system to control power delivery, the braking subsystem for regenerative braking, safety subsystems for power shutoff, and cabin subsystems such as communication and infotainment.

Figure 2 shows a layout of the BMS and connected subsystems. The basic system includes an equalizer that is used to maintain the proper charge on each cell and an ECU that monitors the cell. The ECU collects temperature and voltage information from each cell along with electrical requests from other subsystems and directs the equalizer to maintain a balanced charge on the cells. Weak cells will get charged more often and stronger cells will be used more for energy requests. This helps to increase the total life of the battery pack. 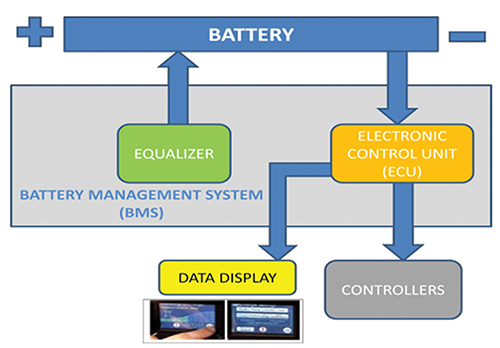 The ECU needs to have the ability to be programmed according to different battery technologies– mainly lithium-ion and nickel-metal hydride. The system also needs to be able to monitor both short-term (the last few charge cycles) and long-term (lifetime) cell performance. This is critical to maximizing the battery life, and short-term monitoring of up to 60 times a second is a unique requirement that makes the high endurance of Cypress’s F-RAM an ideal memory technology for the application.

The tire pressure monitoring system (TPMS) monitors the internal tire pressure of all tires and reports if any are underinflated. As of 2012, this subsystem is mandatory in all new cars in Europe and the United States. The system is composed of two key modules: a wireless pressure sensor, and a wireless receiver/data logger. The main requirements for the pressure sensor are to be able to self-power and withstand the environmental forces imposed on it by the tire. The low power requirement of Cypress’s F-RAM makes it ideal to serve as data storage on the sensor module.

The wireless receiver/data logger must be able to store data from all the sensors and provide alarms to the user when trigger points are hit. With the added endurance of Cypress’s F-RAM, more elaborate leak detection is possible.

By storing more pressure history, the TPMS is able to not only trigger on a low-pressure event, but also alert the user to a slow leak over time. This tire pressure history is also valuable when investigating equipment failures and accidents. Figure 3 shows the basic system design of the TPMS.

The antilock braking system (ABS) is used to prevent the wheels from locking up during braking. It is a vital part of the vehicle’s safety systems and helps provide better braking and steering performance on wet and icy roads. The system works by modulating the brake pressure on each wheel independently. It adds to the traditional braking system a hydraulic modulator and an ECU that is used to control the modulator. The system itself does not require large amounts of nonvolatile memory to operate, but as in the TPMS subsystem, the ability to keep a trailing log of events can be an invaluable resource for determining the events leading up to an accident.

The rolling buffer used to record the last few seconds or minutes of system events requires non-volatility, fast writes, and high endurance. Cypress’s F-RAM meets all three system requirements. With its fast zero-delay writes, there is no risk of losing the most important part of the history. Also, with its 1014 write endurance, the memory will be able to meet the life cycle requirements of the system. Figure 4 show the basic ABS design. 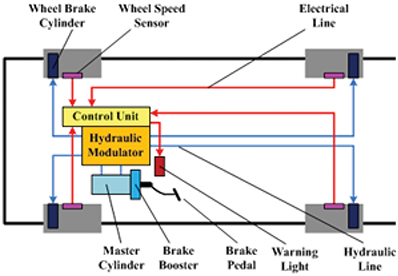 The airbag deployment subsystem is the main system in a class of subsystems known as “supplemental restraint systems (SRSs).” The SRS is used in conjunction with traditional restraint systems such as seat belts. It has two key components: a front-facing expandable bag and a crash/accelerometer. To get the performance needed to expand the bag in the event of an accident, one pressurized gas canister is used. This makes the airbag a one-time use system and destructive to other components in the vehicle. As a result, it is expensive to deploy.

Due to the demand for safety and the cost of replacement, manufacturers have added a variety of additional sensors to monitor and record the person sitting in the seat. These include a passenger occupancy pressure sensor, which is used to enable the airbag subsystem, along with a variety of position sensors, to boost the effectiveness of the airbag system. The position data is constantly being updated and must be stored up to the point and even after the point of system deployment. The requirement to constantly log position data and store it in non-volatile memory makes Cypress’s high performance, low-power and high endurance F-RAM an ideal solution.

An event data recorder (EDR) is a subsystem that monitors and records information related to a vehicle’s operation prior to and after a collision. This system, which is also referred to as a “black box,” is a standalone system that connects to and monitors data from other subsystems in a trailing time log of events.

The EDR subsystem is composed of two main blocks: a network interface and nonvolatile memory. As of 2014, most vehicles in the United States are required to incorporate an EDR. With the requirement to store data from so many subsystems within the vehicle, nonvolatile memory write performance and direct memory addressing are crucial.

Most EEPROM and flash memories have a 5-millisecond write delay during which the device is not accessible, and a power failure may cause the data to be lost. Cypress’s F-RAM has a zero write delay; specifically, the device is ready prior to the next bus clock on the interface. Many other nonvolatile memories also require a page-level read-modify-write procedure to store a single byte of data, but Cypress’s F-RAM is direct byte addressable, allowing data to remain unmodified once it is written.

Navigation systems need to be able to power up using the location data from the previous power cycle to locate the vehicle’s position when the GPS is temporarily unavailable due to buildings and other obstructions. In this situation, the system relies on a known starting point of the vehicle along with other sensors such as speed and direction to calculate its position. 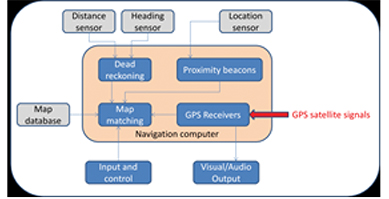 The navigation system is often integrated with the vehicle’s entertainment system to allow access to the vehicle’s audio system and display. This combined system is referred as the “infotainment system.” The key benefit of combining these systems is straightforward. Both systems involve considerable driver interaction, especially audio. With the systems combined, the navigation system can easily gain access to and interrupt the audio system to relay important driver information. 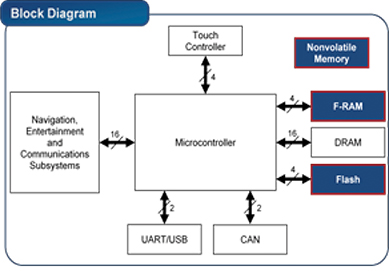 The engine control module (ECM) is the most powerful and expensive subsystem in modern vehicles. In general, it controls all the aspects of power generation and distribution within the vehicle. The ECM normally consists of a 32-bit microcontroller that runs at speeds upwards of 100 MHz with several megabytes of system memory, a variety of network interfaces to access other subsystems, and dozens of input and output control systems. It takes user inputs from various controls and inputs them, along with the current state of the engine, into an engine control model that directs engine components. 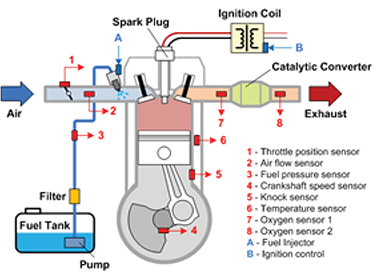 The advantages of Cypress’s F-RAM lie in how the system records its current state. Because some components wear, storing the current state in a non-volatile memory allows the system to operate effectively from power-on and because the system does not know when the power will be removed, it must continuously store the state of the system requiring the F-RAM’s high write endurance.

The automatic driver assistance system (ADAS) is a collection of safety systems designed to prevent the driver of a vehicle from getting into an accident. These systems include autonomous emergency braking (AEB), lane detection warning (LDW), and adaptive cruise control (ACC), which need to be able to log real-time data and store it.

Cypress’s F-RAM has three key advantages over EEPROM and flash that should be used to identify specific applications:

F-RAM is also more resilient to external temperature, meaning that its write endurance and data retention hold up better when the operating temperature increases. Many EEPROM endurance specifications are at 85°C, making them unfit for automotive applications that require 125°C, where EEPROM endurance drops down to 105°C.

Applications in which write endurance is important are time-based data loggers that need to be able to record and store data leading up to and even after an event. Examples include accident records, adaptive cruise controls, airbag loggers, autonomous emergency braking, battery management, engine control, event data recorders, and tire pressure monitoring.

Applications in which write speed is important are those in which the most important data is that where the system fails. Examples include accident recorders, battery management, tire pressure monitoring, navigation, and engine control.