Growing use of NAND in smartphones, media tablets, and other portable devices is driving the flash market. 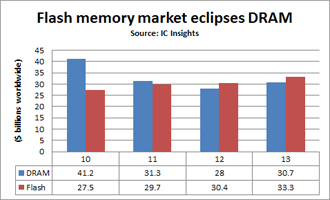 The total flash memory market will end 2012 growing 2 percent to $30.4 billion, while the DRAM market will decline from $31.2 billion to $28 billion, the researcher reported. Smartphones, media tablets, and other personal media devices use flash memory, while DRAM is used mostly in PCs.

With the exception of 2010, the gap between DRAM and flash memory markets has been narrowing for several years. Demand for flash has outpaced DRAM because of the popularity of portable devices such as smartphones and media tablets. Smartphone shipments are projected to end 2012 growing 55 percent to 750 million units. Shipments of media tablets are forecast to increase 80 percent to 117 million units, according to IC Insights.

However, PCs sales have been sluggish and DRAM prices have dropped, resulting in a declining DRAM market.

Flash memory will widen its lead over DRAM for the next five years. In fact, the NAND flash market alone will be larger than the DRAM market in 2013. NAND will have the third-highest average annual growth rate through 2017, trailing only tablet processors and cell phone application processors, according to the researcher.

NAND flash sales are forecast to increase 14 percent annually from 2012-2017, growing to $53.2 billion at the end of the forecast period, while the DRAM market is forecast to grow 9 percent over the same time, according to IC Insights.