More than ever, cameras are becoming a part of the personal and business devices we carry in our pockets.


More than ever, cameras are becoming a part of the personal and business devices we carry in our pockets. While the light levels at which today’s photographic image sensors can work is extremely low, having flash lighting means users can capture greater detail at faster speeds. And to be sure that flash systems do not consume a lot of the power budget of these battery-run portable electronics, designers have turned to using LEDs as the light source, rather than the traditional xenon tube.

A broad array of devices is available today for driving LEDs as flash devices. Many can deliver high current so that LEDs can be driven to maximum output. However, the increased efficacy of today’s LEDs – meaning they can deliver more light from less current – means that drivers can also focus on reducing current drain on batteries.

In the following sections, we sample five LED drivers for flash applications that are readily available today. Among them, two – the ADI and Micrel devices – are designed solely for driving flash LEDs, while the other three parts can also drive a second LED. The ON Semiconductor device is unique among them in being designed specifically to deliver very high current and to support supercapacitor-based energy storage, while the Texas Instruments device places special emphasis on system operation/protection. 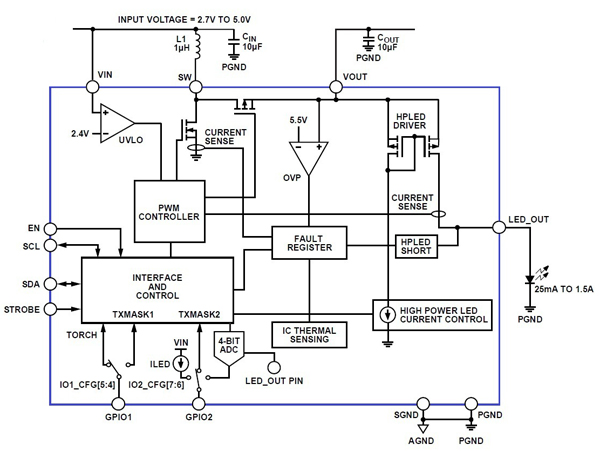 The device’s I²C interface enables programming of timers, currents, and status-bit read-back for operation monitoring and safety control. The ADP1650 is available in a compact 12-ball, 0.5 mm pitch WLCSP package and a 10 lead LFCSP package and operates within specification over a junction temperature range of −40°C to 125°C.

IXYS’s LDS8621 is a high-efficiency, multi-mode fractional charge pump with ultra-low feedback voltage that can drive up to two high-current LEDs. The inclusion of a 1.33x fractional charge pump mode and ultra-low-dropout PowerLite current regulator (Figure 2) increases the device’s efficiency up to 95 percent. This mode requires no additional external capacitors. 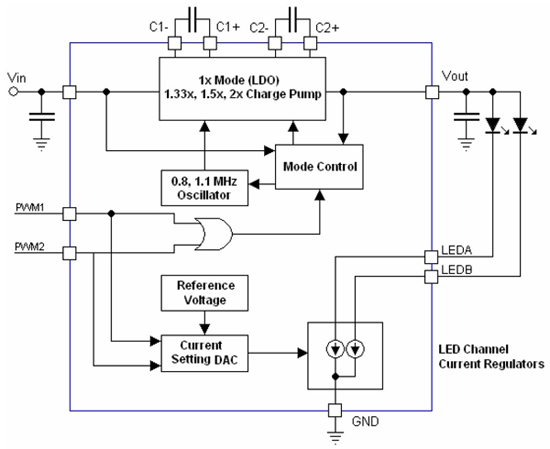 
The PWM1/PWM2 logic inputs function as both a chip enable and a PWM mode LED brightness control. The PWM1 pin controls LED A, while PWM2 controls bank LED B. The maximum LED current value is factory preset to 96 mA, and each LED may be programmed separately. Low-noise input ripple is achieved by operating at a constant switching frequency, which allows the use of small external ceramic capacitors. The multi-fractional charge pump supports input voltages from 2.7 to 5.5 V. The device is available in a 16 lead 3 x 3 x 0.8 mm package TQFN and, like the ADI part, has a junction temperature range of −40° to 125°C.

Micrel’s MIC2291 is a 1.2 MHz pulse-width-modulation (PWM) boost-switching regulator that is optimized for high-current, white LED photo flash applications. With a guaranteed switch current of 1.2 A, the MIC2291 easily drives a string of up to three white LEDs in series at 100 mA, ensuring a high level of brightness and eliminating several ballast resistors.

The MIC2291 implements a constant frequency, 1.2 MHz PWM control scheme (Figure 3). The high-frequency PWM operation saves board space by reducing external component sizes. The added benefit of the constant-frequency PWM scheme, in contrast to variable frequency topologies, is much lower noise and input ripple injected back to the battery source. 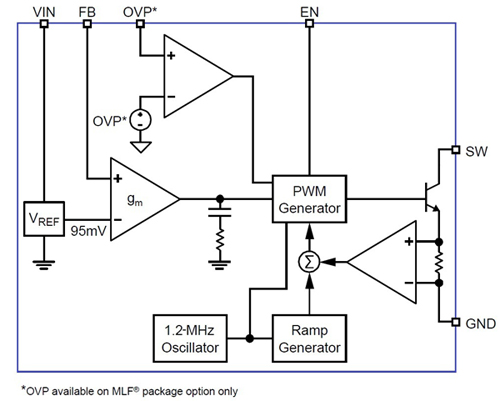 
To optimize efficiency, the feedback voltage is set to only 95 mV. This reduces the power dissipation in the current-set resistor, and allows the lowest total output voltage, hence minimal current draw from the battery.

The MIC2291 is available with two levels of overvoltage protection: 15 and 34 V. This allows designers to choose the smallest possible external components with the appropriate voltage ratings for their applications. The MIC2291 is available in low-profile, Thin SOT23 5-pin and 8-pin 2 x 2 mm MLF package options and has a junction temperature range of −40° to 125°C.

Well-suited to systems powered by Li-ion batteries, ON Semiconductor’s CAT3224 integrated flash LED driver delivers LED flash pulses of up to 4 A, far beyond the peak current capability of the battery. Among the devices discussed here, it is unique in being specifically designed to support charging of dual super-capacitors. Its dual-mode (1x/2x) charge pump charges the stacked super-capacitor to a nominal voltage of 5.4 V, while an active balance-control circuit ensures that both capacitor cell voltages remain matched (Figure 4). The nominal charging current to be drawn from the battery is set by an external resistor tied to the RC pin. 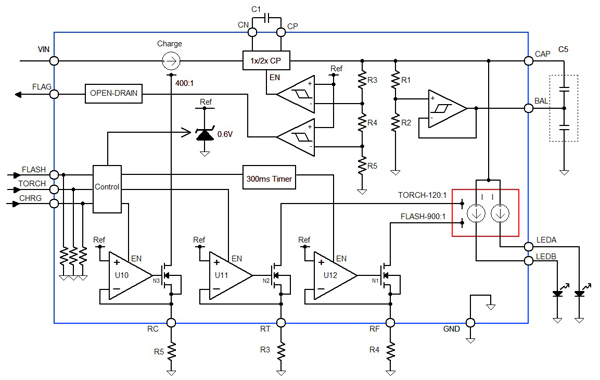 
The driver also features two matched current sources. External resistors provide the adjustment for the maximum flash-mode current (RF) as well as for the device’s torch-mode current (RT). A built-in safety timer automatically terminates the flash pulse beyond a maximum duration of 300 ms.

In addition to thermal shutdown and overvoltage protection, the device is fully protected against external resistor programming faults and fully supports reverse output voltage for all conditions. Like IXYS’s LDS8621, the device is packaged in a 16−pad, 3 x 3 x 0.8 mm TQFN package. Compared to the devices previously discussed, it has a broader junction temperature operating range of −40° to 150°C.

The Texas Instruments (formerly National Semiconductor) LM3554 is a 2 MHz (fixed-frequency) current-mode synchronous boost converter. The device is designed to operate as a dual 600 mA (1.2 A total) constant-current driver for high-current white LEDs, or as a regulated 4.5 or 5 V voltage source. The dual high-side current sources allow for grounded-cathode LED operation (Figure 5). An adaptive regulation method ensures the current source for each LED remains in regulation and maximizes efficiency. 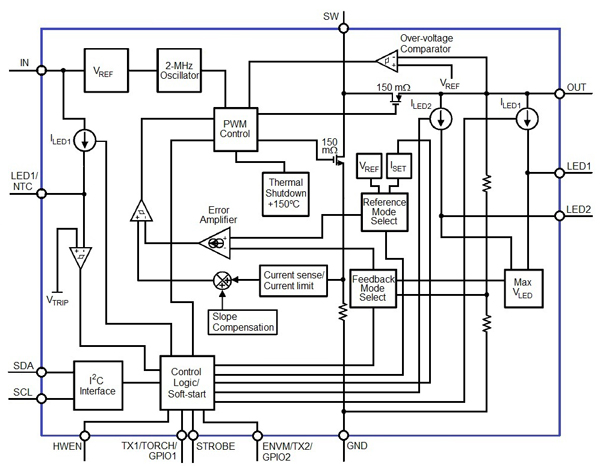 
The main features include an I²C compatible interface for controlling the LED current or the desired output voltage, a hardware flash enable input for direct triggering of the flash pulse, and dual TX inputs, which force the flash pulse into a low-current torch mode allowing for synchronization to RF power amplifier events or other high-current conditions. Additionally, an active-high hardware enable (HWEN) input permits hardware shutdown during system software failures.

The system-oriented device has many features for safe operation. Five protection features are built in: The device also provides various fault indicators, including: The LM3554 comes in a 1.7 × 1.7 × 0.6 mm 16-bump micro surface-mount-device package, and has a junction temperature operating range of −30° to 125°C.

This article has presented five highly integrated devices delivering the right combination of features – high efficiency, maximum light, and a small footprint – for driving LED flash in mobile devices. These parts are also designed to extend battery life, improve pictures, reduce application size, and enhance system reliability. What is more, two of these solutions have unique characteristics, with one designed specifically to deliver very high current and support super-capacitors, while the other device offers a host of protection features and fault indicators.