Traditionally, there is a common dc input bus voltage that provides power to all non-isolated point-of-load (POL) converter modules on a printed-circuit board (PCB).


Traditionally, there is a common DC input bus voltage that provides power to all non-isolated point-of-load (POL) converter modules on a printed-circuit board (PCB). Now a majority of applications have multiple POL converter modules distributed across the designer’s board. They are primarily buck converters incorporating switching techniques for higher efficiency.

Each of these switching POL converters generates ripple and noise on the common DC input voltage bus. This must be suppressed so that operation of one POL module does not adversely affect the performance of other POLs on the board.

In addition to ripple and noise created by POLs, the common DC bus voltage in these applications is supplied by another DC/DC switching converter module whose output adds its own ripple to the common DC voltage bus. The output voltage of this DC/DC converter must also be filtered.

Normally, the input voltage feeding the POL module has a small AC component superimposed on a large DC voltage. It is present in two different frequency ranges, each caused by a different mechanism. While the first is a low-frequency component of a few tens of kilohertz, due to load transient changes at the output of the POL, the second source of input AC ripple and noise is the switching action of the POL buck converter, as well as the input DC/DC source converter. It is usually a high-frequency AC ripple and noise. However, the contribution coming from the source converter is usually much smaller than the ripple caused by the POL module because the upstream converters incorporate an LC filter at their output to reduce the output ripple and noise significantly.

In general, this AC component on the input DC bus can be further suppressed by using decoupling capacitors. The application note recommends using low ESL and ESR ceramic capacitors for input decoupling of the high-frequency ripple and noise, since they provide the maximum attenuation in the smallest package size. To reduce high-frequency ripple (Figure 1) at the input of the POL, 0.1 and 1.0 μF small-package ceramic capacitors must be placed at the input pin of the module. Layout plays an important part due to high-frequency switching ripple and noise. For proper operation, according to the GE Energy application note, the peak-to-peak voltage ripple must not be more than 3 percent of the bus voltage. 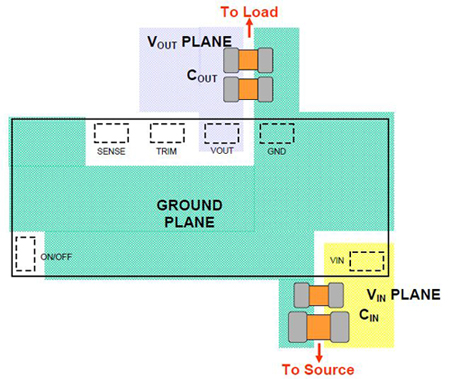 Figure 1: To reduce high-frequency ripple and noise, decoupling ceramic capacitors are placed as closely as possible to the input pin of the POL module.

To demonstrate the effectiveness of the decoupling capacitors in this application, Figure 2 shows the variation of input ripple voltage at full load with varying output voltages for the 12 V Austin Lynx family of POL modules, when no external input filtering is used. 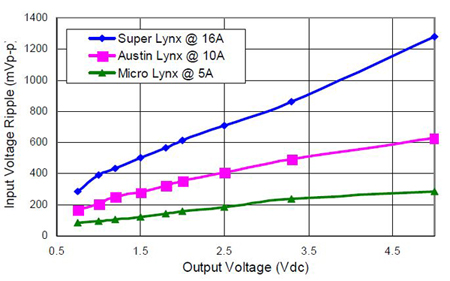 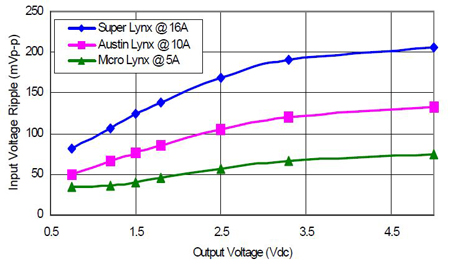 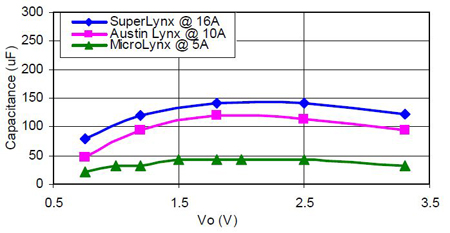 Figure 4: The amount of ceramic capacitance required to limit the input voltage ripple to 100 mVp-p for a 5 V input bus.

Certain applications may demand further suppression of the input ripple of the POL converters to very low values. In such cases, the application note recommends using a π filter with the right combination of a small inductor and capacitors. The inductor in the filter circuit increases the source impedance of the input bus. The value of the inductor is chosen such that it does not cause input filter instability. It is recommended that the inductance be kept to less than 0.5 μH.

Circuit simulation can be used to predict the input ripple voltage and rms currents flowing through individual capacitor branches. It is very important not to exceed the rms current rating of the capacitors. If excessive rms current flows through the capacitors, it may cause catastrophic component failures.

As an example, using simulation, the application note recommends a complete π filter with values for all the capacitors and inductors (not shown in this article).

In summary, filtering the input bus of POL converters requires careful attention to component selection and PCB layout. Low ESL and ESR surface-mount multilayer ceramic capacitors are the best choice for filtering high-frequency ripple voltage. If other capacitor technologies such as tantalum or aluminum electrolytics are used for load transient suppression on the input bus, they should always be used in parallel with ceramic capacitors.