A study of the heat loads for an outdoor LED-based lighting system using analytical modeling to determine the feasibility of the design with solar heat load.

The system consists of a rotatable LED-based lamp fixture which is mounted in an enclosure. The enclosure consists of an aluminum compartment on which a dome is placed. The LED lamp fixture is an actively cooled heatsink with 25 cold white LEDs. The junction temperatures of the LEDs need to be determined for different forward currents. Inside the enclosure, components such as motors, drivers and an LED power supply unit (PSU) dissipate heat. 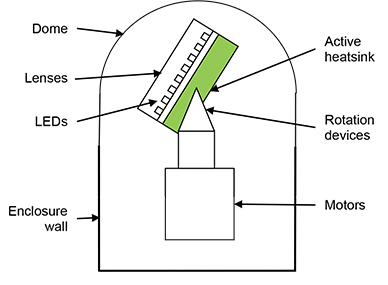 Figure 1: Sketch of the lighting system. 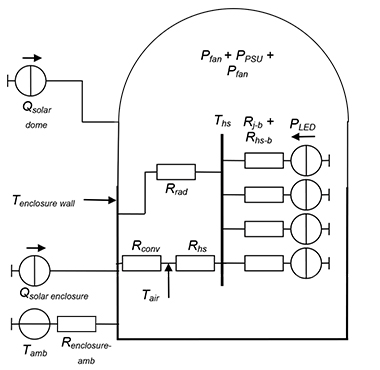 Figure 2: Thermal resistance diagram of the lighting system given in its electrical equivalent.

The LEDs are mounted on a 200 mm x 200 mm metal core board (MCB). The heatsink base dimensions have the same area as the MCB. The heatsink is 100 mm high and is cooled by two fans dissipating 3 W together. The heatsink/fan combination has a thermal resistance of 0.6 K/W.

It is assumed that the wall thickness of the enclosure and dome has a negligible effect on the analysis. Therefore, the conduction resistance of the walls is ignored.

It is also assumed that only the enclosure transfers heat to the outside.

The dome consists of a 200 mm high straight section with the same diameter as the enclosure.

The solar load (direct, indirect and diffuse) is assumed to apply to half the outside area of the enclosure and dome.

The solar absorptivity, αsolar-dome, of the dome is assumed to be 0.4.

The solar absorptivity, αsolar-EN, of the enclosure is assumed to be 0.4.

The emissivity of the enclosure is assumed to be 0.85.

The calculations will be done at no wind and with a wind speed of 2 m/s using the heat transfer coefficients of 5 and 15 W/m²·K, respectively.

LEDs
A total of 25 cold white LEDs will be evaluated at 350 to 1000 mA. The evaluation uses the LUXEON Rebel reliability and lifetime data for the B10, L70 condition with required lifetime of 40,000 hours. The lifetime condition B10, L70 implies that for a specific lifetime, 10% of the LEDs are expected to fail at the specified junction temperature and forward current. The failure criterion is when the light output of the LED has been reduced to 70% of its original light out. 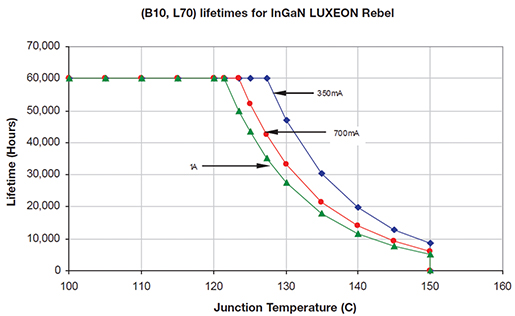 The LEDs can be mounted on an FR4 PCB or a metal core board. The LEDs have a junction-to-board thermal resistance of 10 K/W. The heat dissipation of the LEDs is calculated using Equation 2, where If is the forward current in amps, Vf is the voltage in volts and ηL is the light efficiency. The values used in the study are given in Table 2.

The motors and drivers are used in the enclosure to rotate the lighting system. The total power dissipation from these devices is assumed to be 10 W.

The LED power supply unit will also dissipate heat and is given by Equation 3, where N is the number of LEDs and ηPSU is the PSU efficiency, which is assumed to be 85%.

The first calculation step for this analysis is to determine the outside wall temperature. This can be done by applying a control volume around the enclosure. Applying a steady-state energy balance, Equation 4, to the control volume yields Equation 5, which is solved iteratively for the enclosure wall temperature, TEN. Please note that in the calculations, the temperature is in Kelvin and not degree Celsius. This is because the radiation equations use temperature in Kelvin to calculate heat flux. 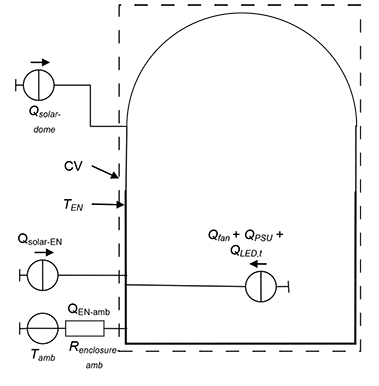 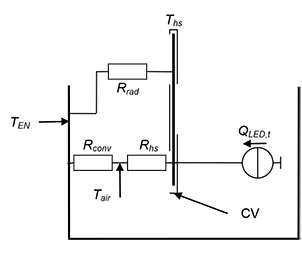 Several studies have been performed to analyze the various parameters of the lighting system. A summary of these studies is listed in Table 3. 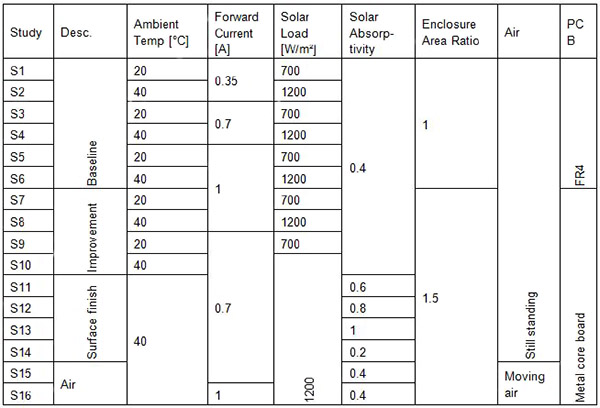 Table 3: Summary of the studies to be performed.

Calculation results are given in Table 4 for different case studies. Figure 7(a) shows the temperature difference between components. This gives a visual indication of the largest temperature differences and where improvements can be made. Figure 7(c) shows the heat energy applied to the system from various sources as an absolute value. Values in Figure 7(d) are similar to (c), but are given as a percentage of the total. 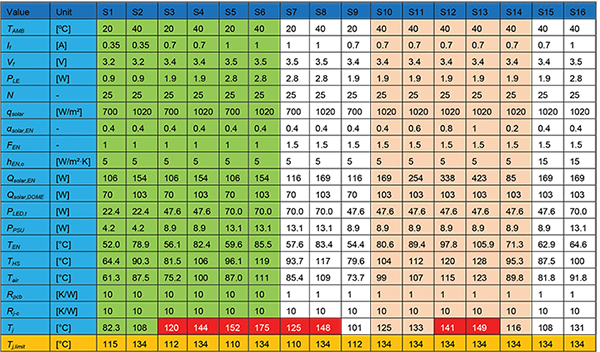 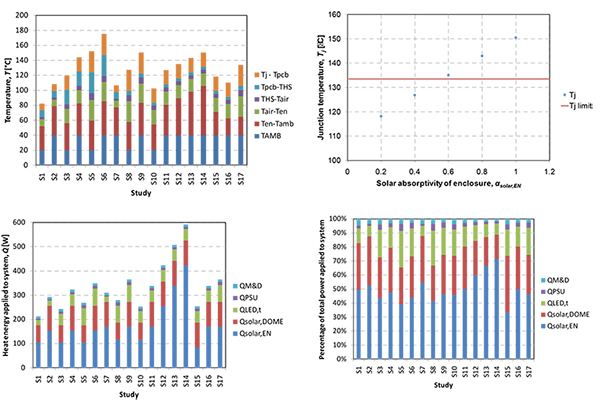 Figure 7: Temperature difference between system components (a), junction temperatures as a function of solar absorptivity (b) and heat energy applied to system shown in absolute values (c) and percentage of total (d).

Though the previous studies have shown that 700 mA LEDs are not feasible for the baseline model, the improved model was also studied for the effect of change in the solar absorptivity of the enclosure wall. Although the heat load to the system has been reduced by 272 W (S11) to 188 W (S15), the air temperature remains too warm. Also, they are considered to be too shiny for a surface to have an absorptivity of 0.2. Over time, the shininess will be reduced by a dust layer, wind born dust that sand papers the surface.

For the baseline study, it was shown that at 350 mA (S1), the junction temperature is within specification for the lifetime condition. However, the air temperature is quite high for the maximum condition (S2). This was improved by using the superior model (S7).

This article has shown how to set up an analytical model of an outside system and perform severity studies. It was found that the solar load for the enclosure was on average 50% of the entire heat load for the system. This shows that for an outside system, the solar radiation and therefore the solar absorptivity are important parameters to consider when designing the system. The system is not feasible for a forward current of 1000 mA, while further improvements would have to be evaluated using computational fluid dynamics to determine whether 700 mA is feasible. When the LEDs were run at 350 mA with the improved model, they were within specification. The air temperature was also found to be reasonable for the fans, power supply unit, motor and drivers.

Safety is also an important factor in a system design. One of the parameters needed for CE certification is that the surface temperature not be above 75°C. None of the maximum condition studies with still air were found to satisfy this condition. However, when the effect of wind was included, it was found the enclosure temperature is reduced.

This article first appeared in the Qpedia Thermal eNewsletter in December, 2007.