However, the amount of semiconductor production capacity will only grow by about nine percent.

Spending on worldwide fab projects, including construction, facilities, and equipment, could grow by 22 percent in 2011 compared to 2010, according to trade association SEMI.

Total spending on fab projects could approach $47.2 billion this year, above the estimated $38.6 billion spent in 2010, said Christian Gregor Dieseldorff, senior analyst of fab information in the SEMI Industry Research and Statistics group. Dieseldorff said fab project spending in 2011 will exceed 2007 fab spending of $46.4 billion. 2007 was the peak year for fab spending.

While companies are increasing capital spending, it doesn't necessarily mean that they are adding huge amounts of semiconductor production capacity. Most spending is directed towards upgrading existing facilities, rather than building new ones, reported SEMI.

In fact, semiconductor companies are trying to avoid adding too much capacity and oversupply which results in declining prices.

Prior to the 2008-2009 economic downturn, semiconductor capacity growth from 2004 to 2007 ranged from 14 to 23 percent per year. SEMI's World Fab Forecast predicts capacity growth will rise just nine percent for 2011 and seven percent annually through 2014 (excluding discrete devices). One reason for the modest capacity growth rates is there are few new fabs being planned despite record spending on fab equipment.

SEMI said in 2010, 34 new volume fabs began construction, but most of them are light emitting diode (LED) fabs. In 2011, only seven facilities have a high probability of being built and only four more are likely to start in 2012, according to SEMI.

There is also a slowdown in the number of 300mm fabs being built. In 2010, there were seven 300 mm volume fabs (excluding R&Ds and pilots) beginning construction. However, in 2011, only a new Intel fab is expected to start in mid-2011, according to SEMI. In 2012, three 300 mm fabs will begin construction.

However, there are seven 450mm fabs being planned in the next several years. The first facilities are expected to come on line in 2013.

The increase on spending for new fab projects in 2011 comes on the heels of a record year of sales of semiconductor manufacturing equipment. Worldwide sales of chip making equipment totaled $39.54 billion in 2010, a record year-over-year increase of 148 percent, reported SEMI.

Equipment purchases increased by double-digits to triple-digits for all the regions, with the steepest increases reported for China and Korea. For the second year in a row, Taiwan was the region with the highest amount of spending with $11.19 billion in equipment sales. In second place, the Korean market had $8.33 billion in sales. 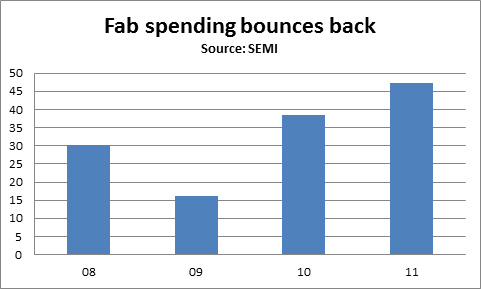 Fab spending including construction, facilities and equipment, has rebounded, but will not lead to a big increase in semiconductor production capacity.
Supplier
Product Type
Industry
Function