Three-dimensional LCD TVs are highly demanding in terms of current accuracy, peak current range, the number of channels, timing speed and accuracy in the LED driver IC. This article explains the problems and indicates some strategic approaches to addressing them.

Three-dimensional video is the hottest, new technology in the TV industry. For the leading TV brands, it represents their most important strategy for maintaining margins and market leadership, because creating a fantastic 3D viewing experience calls for highly advanced technology and sophisticated image processing – fields in which they excel.

One challenging element of 3D TV design is the power circuit driving the strings of backlighting LEDs. These devices need to be switched precisely for very short periods of time, but (for 3D viewing) to relatively high peak currents. Additionally, to achieve consistent brightness across the screen, the amount of current supplied must be very accurately regulated. Such a demanding combination of accuracy, current capability, and timing has not been required previously in any application, and hence a new generation of LED drivers specifically designed for 3D TVs is emerging.

In order to evaluate the specification of a backlighting LED driver IC properly, it will help to understand the main factors affecting the operation of a 3D TV.

There is only going to be one winner in the battle between LCD and plasma for the 3D market. While plasma is faster than LCD, government sponsored regulation in Europe and the United States means that efficient LCD technology – plasma consumes up to twice as much energy as conventional LCD, and LED backlighting improves LCD efficiency even further – is the only viable option. The US’s Energy Star® standard version 4.0 of the television specification became effective on May 1, 2010, and set the industry a tight power budget. Version 5.0 planned for May 2012 cuts even further the maximum allowed “on” power (see Table 1).

LED backlighting is now being widely adopted. It is forecasted that by 2012 that 70 percent of LCD TVs will use LED backlights rather than cold cathode fluorescent, because of the superior performance it provides.

There are two ways to implement LED backlighting (see Figure 1):

For 3D stereoscopic visualization, glasses are used to effect time-multiplexing of the right- and left-perspective views of the right and left eye. It is already clear that the shutter glass type of glasses will win over the competing technology of polarized glasses because of the superior 3D resolution and the excellent 2D picture quality. Usage of polarized glasses degrades the picture quality in 2D usage, and for a long time to come, most viewing of 3D sets will be in 2D mode because of the scarcity of 3D programming.

The challenge with the operation of shutter glasses is to avoid cross-talk and flicker (see Figure 2). Because of the time-multiplexing in 3D mode, an effective doubling of the display rate from 120 Hz to 240 Hz is necessary to avoid flicker problems. It is expected that for premium market TVs the picture rate will even increase to 480 Hz.

Crosstalk is the leak of the left image channel into the right eye’s view and vice versa. The perception of crosstalk is the so-called “ghosting,” where a shadow image is visible. Avoiding crosstalk requires extremely precise synchronization of the LCD, the LED backlight and the shutter glasses. 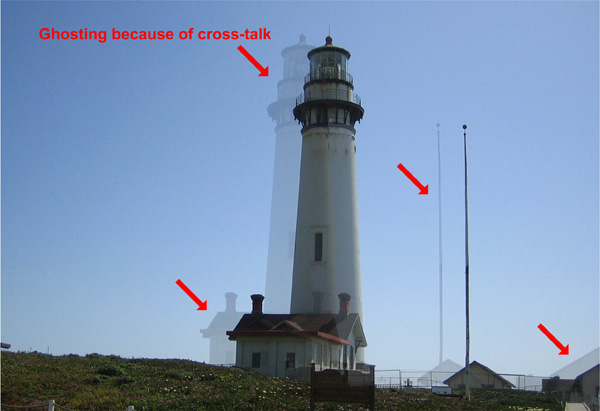 Figure 2: Ghosting artifact caused by crosstalk requires extremely precise synchronization of the LCD, the LED backlight, and the shutter glasses.

Liquid crystal shutter (LCS) glasses have two issues that must be taken into account (see Table 2). First, they need significant time to switch between the transparent and non-transparent states: response time is 0.1 ms for open-to-close and 1.8 ms for close-to-open. Second, the transparency in open mode is limited, causing a significant reduction in brightness.

To avoid crosstalk caused by the open-to-close switching duration, blank frames are inserted during the transition (see Figure 3). 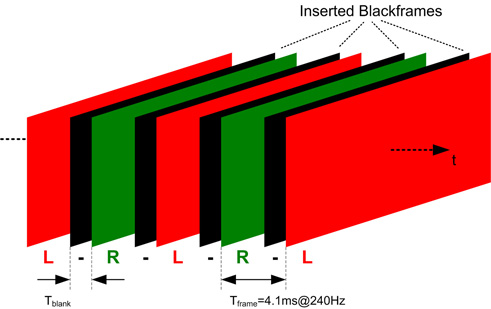 In addition to the limitation of the shutter glasses, the LCD’s response time has to be taken into account. The best-in-class value for new TV sets is 2 ms, assuming a 240 Hz picture rate with a frame period of 4.1 ms, the “on” time for the backlight is less than 2 ms.

This then defines the scope of the task facing the power circuit designer. In 3D mode, high LED currents have to be applied for very short periods, and with very accurate control of the timing.

Because of the low duty cycle and limited transparency of shutter glasses, high LED peak currents are necessary in order to produce sufficient brightness in 3D mode. The peak current in 3D mode is significantly higher than in 2D mode (see Table 3).

High-quality TVs must maintain uniform perceived brightness across the entire screen area. In LED backlighting systems, this means the accuracy of the LED driver must be ±1.5 percent. This accuracy budget must include all the deviations introduced by the LED driver device itself, and by external current-set resistors. What is more, this minimum accuracy must be achieved across the entire 2D and 3D current range – a range that is nearly five times wider than in 2D-only designs.

To enable this functionality, devices from austriamicrosystems implement an architecture that uses one high-accuracy DAC to set the current in 2D mode and 3D mode with the same precision. This avoids the need for complex correction schemes such as mode-dependent correction look-up tables.

It should be said that a value of ±1.5 percent system accuracy is extremely difficult to reach. To give some insight into just how difficult, consider that the reference current is normally set with an external resistor: the resistor’s accuracy is already ±1.0 percent. Therefore from a system point of view, there is only ±0.5 percent tolerance left for the on-chip current sink accuracy.

In order to reach an absolute current accuracy of ±0.5 percent, austriamicrosystems’ panel-lighting LED driver products are based on trimmed, temperature- and offset-compensated high-precision current references. For on-chip channel-to-channel matching, even better accuracy of ±0.2 percent is achieved.

The challenge is not achieving the required accuracy at a single specified current – many ordinary driver ICs can achieve this already. The difficulty is achieving this accuracy value in the operating conditions of a 3D TV, where the driver IC must support the current ranges of both 2D and 3D mode, in the presence of fluctuating temperatures up to the levels experienced inside a TV set.

Demand for direct backlighting systems – in preference to edge-lit systems – is likely to be high because they support local dimming, which helps reduce energy consumption. This, in turn, requires a large number of LED channels to be set up within each frame. As many as 200 channels can be found in a TV, driven by multiple LED driver chips that must all be configured within a single frame period.

This calls for high-speed daisy-chained SPI interfaces connecting several LED drivers to the SPI master. austriamicrosystems has implemented a special SPI protocol for fast block transfer of PWM set-up data to several devices, either configuring all devices with the same data or writing blocks of multiple bytes for individual set-up of each device in the chain.

An SPI interface also enables the precise timing required to implement black frame insertion (BFI) effectively. The timing must be synchronized to the frame rate by using VSYNC and HSYNC input signals. This then requires independent PWM generators that run synchronously with these signals, enabling flexible programming of the timing during a frame period. Under this scheme, interaction between a microcontroller and the timing controllers on the LED driver chipset can be minimized.

austriamicrosystems has implemented dedicated shadow registers that allow SPI data transfer during the whole VSYNC period; the update time for the PWM generator set-up data is precisely set by the VSYNC timing. This guarantees that SPI data transfer is completely decoupled from timing generation, and no dependency or error can be generated by SPI timings, which can be quite unpredictable if the master is implemented on a microcontroller.

With these shadow registers, the PWM set-up can also generate more than one pulse within each VSYNC period, enabling more complex schemes for BFI and doubling the frequency in respect to VSYNC.

Implementing a 3D mode in an LED TV increases the demand for current accuracy, peak current range, the number of channels, timing speed, and accuracy in the LED driver IC. At the same time, energy constraints will force manufacturers to use advanced power saving schemes with intelligent dimming solutions for both edge and direct LED backlighting.