Expect Stable Prices for Analog ICs for Rest of the Year

While it will not be a buyer’s market, buyers can expect short leadtimes for most analog chips. 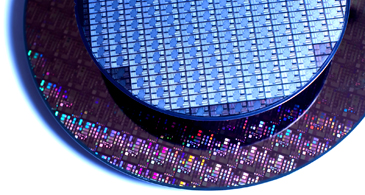 Prices for analog semiconductors will remain soft and leadtimes will be steady through the year, despite rising demand as OEMs and electronics manufacturing services providers (EMS) increase purchases.

However, while the overall growth rate for analog chips will be four percent, some analog IC product segments will have higher growth rates than others. For example, automotive-application-specific analog semiconductors and telecom-application-specific analog chips will post eight percent and seven percent growth respectively in 2012, IC Insights reported. Telecom will see healthy growth because of strong growth for smart phones and media tablets such as Apple’s iPhone and iPad. 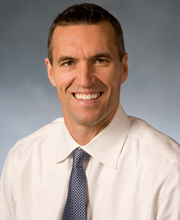 “Automotive has been the most stable and strongest for us,” said Todd Reimund, director of marketing at Linear Technology.Telecom-application-specific integrated circuits will grow from $12.7 billion in 2011 to $13.5 billion in 2012. Growth will continue through 2016 when revenue will total $15.6 billion, according to IC Insights.

One reason for strong analog demand from the automotive sector is that car sales are increasing. "In addition, there's a lot more electronics being put on board cars these days," noted Matas. Some of the systems are mandated by the government, such as systems to measure tire pressure. Other features such as navigation, infotainment, and entertainment systems are proliferating in vehicles, boosting demand for analog chips as well as other semiconductors.

That is good news for suppliers like Fairchild semiconductor. “The automotive and transportation business last year was about 12 percent of our business, and now it's about 16 percent,” said Todd Reimund, director of marketing at Linear Technology, based in Milpitas, Calif. “That market has been the most stable and strongest for us.” 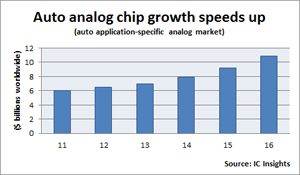 The analog IC market will grow steadily through 2016 when revenue totals nearly $63 billion.Some suppliers say that analog chip demand, which declined sharply in the second half of 2011, has picked up in the first quarter. They say that one reason for the increase is OEMs and EMS providers have reduced their inventories and are now increasing purchase orders.

“We see business growing for sure,” said Reimund. “We have seen a pickup in business since December. Bookings have strengthened.” Linear Technology expects its business to grow four to eight percent in the first quarter of 2012 compared to the final quarter of 2011.

Reimund added that there should be some sales momentum as the year progresses because the majority of customers have burned off inventory and will need to buy more analog chips, as well as other semiconductors.

While demand should rise during the year, it does not necessarily mean average selling prices will change significantly, according to Matas.

“Average selling prices should be relatively flat, maybe fluctuating a little bit here and there by product type, but overall ASPs will be steady,” he said. However, while analog ASPs overall will be generally steady, there will be downward price pressure on older products.

“I have never known a year when pricing was not a challenge,” said Kevin Chynoweth, senior vice president, supply chain management at Fairchild Semiconductor, headquartered in San Jose, Calif. “There are times when the industry is overheated and price concessions seems to slow down, but overall prices are always challenging." 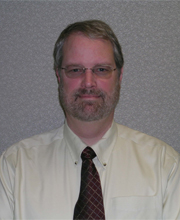 “One year ago, we had leadtimes that were pushing well over six months and now they're under six months," said Kevin Chynoweth, senior vice president, supply chain management at Fairchild Semiconductor.He added that the mobile market has a “voracious appetite for continuous price reduction. That has always been the case.”

Cheynoweth noted that Fairchild's strategy is “to keep working as well as we can to increase the momentum on new products. The best way we can improve our margin position and price position is by replacing older parts with newer products.”

Leadtimes will be steady

Buyers can expect leadtimes to be mostly steady through the year. Many analog IC leadtimes stretched last year, but have since retreated.

“If you were to go back one year ago, we had leadtimes that were pushing well over six months, and now these are under six months, “said Chynoweth. “Many leadtimes were well north of 30 weeks in our most highly constrained areas and now are between 10 and 20 weeks depending on the product and technology.”

Besides prices and leadtimes, buyers should also keep an eye on several trends with analog ICs. One is greater integration.

“We are combining high-speed data converters with amplifiers that drive those data converters,” said Reimund. The idea is to combine provide functionality "in a very small space and provide more complete solutions so a customer doesn't have to have as much know-how about laying out the circuit," he said.

Another trend, which could help reduce cost, is the migration of analog IC production to larger size wafers. Matas said some suppliers are migrating to 300 mm wafers. He added that Texas Instruments already has done so and several other suppliers may follow suit.

“Competitors will try to follow TI's lead in order to remain price competitive in areas where their products compete head-to-head,” said Matas. 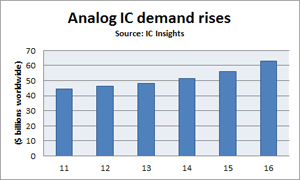 The analog IC market will grow steadily through 2016 when revenue totals nearly $63 billion.STMicroelectronics is considering building analog ICs at its 300 mm Crolles 2 Fab in France. Maxim is using Powerchip as a foundry to have some of their analog chips made on 300 mm wafers, although Maxim is not using 300 mm wafers in their own fabs.

Matas noted that the migration is not occurring with standard analog parts but with "the more complicated chips, and some of the mixed-signal parts.” With larger wafers, suppliers can produce more chips per wafer, reducing cost.

Chynoweth said some suppliers of analog ICs used in smart phones and other mobile devices are shifting to .13 or .18 process technology. He noted that while that may seem like old technology for leading-edge parts, "for analog it’s the sweet spot.”