Ample capacity and modest demand means that buyers have no need to increase inventory levels for power MOSFETs. 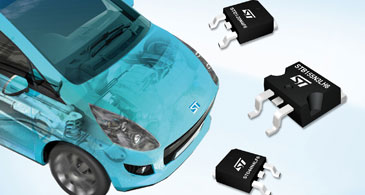 It will remain a buyer’s market for power metal oxide semiconductor field emitting transistors (MOSFETS) through the first half of 2012, as leadtimes will remain short and prices will decline.

The power MOSFET market in 2012 is a far cry from two years ago when parts were on allocation and prices increased. “Two years ago, it was a seller’s market and now it's swung back to a buyer’s market,” said Rob Lineback, senior analyst for researcher IC Insights, headquartered in Scottsdale, Ariz.

“Buyers are comfortable with the thought that they can get the devices on a relatively quick turn and therefore they are not building up inventories and there's competition for business,” Lineback added.

Power MOSFET suppliers say leadtimes are generally "normal" at about 5 to 10 weeks.

Power MOSFET demand has been weaker than expect in the second quarter, and suppliers are not sure if demand will pick up significantly in the second half.

“Demand is steady. I would not say it has picked up,” said Mark Granahan, general manager at Texas Instruments, headquartered in Dallas, Texas. “There was an expectation earlier in the year that the back half of 2012 would be more of a banner year, but in general, equipment sales are flat,” he said. 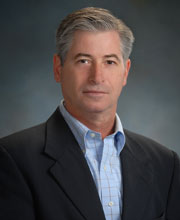 “The consumer/communications segment is a significant driver for power MOSFETS,” said Mark Granahan, general manager at Texas Instruments.Suppliers say the continuing debt crisis in Europe and the weak U.S. economy have resulted in sluggish demand for electronic end equipment, which is impacting power MOSFETs as well as other semiconductors.

He cited figures from World Semiconductor Trade Statistics (WSTS), which said that power MOSFETs will grow by about 10 percent in 2013, while the overall semiconductor industry will rise by about 7 percent.

“The power MOSFET business is quite a healthy, growing business” despite the weak economy, Valletta noted. While business is healthy, there is competition and prices will decline this year for the next several years by 1-3 percent, according to suppliers.

“Prices are definitely a little softer this year than they were last year," said Valletta. “Compared to something like memory ICs, power MOSFET prices are relatively stable.” However, more “downward price pressure" is expected.

Wayne Salata, technical marketing manager at STMicroelectronics, said compared to last year, prices are plus or minus two percent, depending on the product.

Annual price erosion for power MOSFETs is common unless there is overwhelming demand, which will not be the case this year. However, demand will be stronger from some customer segments than others. 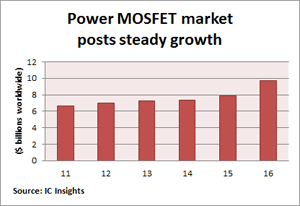 Demand for power MOSFETS will rise, and the market will reach $9.75 billion in 2016.Suppliers said there is significant demand for power MOSFETs from several key market segments including media tablets and smart phones. Suppliers are also expecting demand to pick up later in the year from the PC segment.

“The consumer/communications segment is a significant driver,” said Granahan. “There is a robust uptick in demand from mobile phones and media tablets. These are standout segments for us.”

He added that new ultrabooks and the Windows 8 operating system will have a positive impact on power MOSFET demand as PC users upgrade their systems later in the year.

Valletta noted that while power MOSFET demand has been driven by lower voltage applications such as smart phones and computers, there will be strong growth in the high-voltage MOSFET segments over the next several years. High voltage power MOSFETs are used in industrial equipment and in automotive applications including hybrid and electric vehicles.

Glenn Wright, director of marketing and business development for the power products group of Microsemi, based in Santa Clara, Calif., said that the EV and hybrid market is just “starting up for us right now. We are seeing demand for power MOSFETs not just for vehicles, but for charging systems that the vehicles need."

He noted many companies are working on charging systems for electric vehicles. “If we put a charging station where every fuel gas pump is, it would be incredible growth,” said Wright. 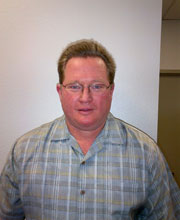 “Electric vehicles and hybrid vehicles will help drive power MOSFET demand,” said Glenn Wright, director of marketing and business development for the power products group of Microsemi.EVs, hybrids, and charging stations use a lot of power MOSFETs. Salata said that while the number of hybrids and EVs that shipped is relatively low compared to traditional gasoline-powered cars, power MOSFET content in EVs and hybrids is much higher than regular vehicles.

“EVs and hybrid EVs have about four or five times the number of MOSFETs than gasoline powered cars, in terms of dollars,” he noted.

Electric vehicles and hybrids use power MOSFETs with voltages of 400 and higher, while PCs and battery-powered devices typically use 40 V and lower power MOSFETs, according to IC Insights.

Higher voltage power MOSFETs account for about 27 percent of the overall power MOSFET market and will have a compound annual growth rate of about 7 percent through 2016, IC Insights reported.

Whether purchasers are buying power MOSFETs for industrial or consumer applications, there are several key technology trends occurring.

With high-voltage applications, buyers can expect to see more power MOSFETs that use superjunction technology, which reduces conduction losses.

“Infineon pioneered the superjunction MOSFET with the introduction of its first CoolMOS products. A number of competitors soon rolled out 650 V, CoolMOS-type MOSFETs, including Fairchild, ST, Vishay, and Toshiba,” said Lineback.

Lineback said sales of gallium nitride and silicon carbide devices were less than $50 million in 2011, and are likely to exceed $100 million in a few years. “The initial products were introduced for 40-200 V applications, but higher voltage gallium nitride and silicon carbide MOSFETs are being developed for 600 V, 900V, and 1,200V, including devices for hybrid and electric cars," he said.

Microsemi is developing power MOSFETs that use silicon carbide technology. 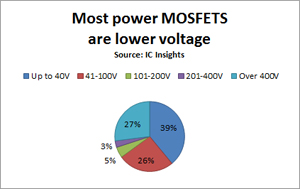 While 65 percent of the power MOSFETs that ship are 100 V or less, additional higher voltage power MOSFETs will ship over the next three years. "Silicon carbide is something we expect to drive our growth in the future due to some of the higher temperature and lower conduction losses that are available in silicon carbide transistors,” said Wright. “It is an area where our group has some R & D efforts and some products today.

“We take one or two MOSFETs and put them in a package with power management IC functions and it could range from anything battery charger to protection switches to DC to DC converters to any type of analog functions,” Granahan added.

Such integration can save board space, improve performance, and reduce total cost.