This article explores ruggedized connectors for military and aerospace applications.


More. That is the essence of pushing the performance envelope. For designers of embedded computer systems in military and aerospace applications, “more” means higher processing speeds to handle the ever-increasing complexity of signal intelligence and networked warfare. This, in turn, requires connectors not only capable of handling the higher data rates, but also capable of operating reliably in the harshest environment.

Even as designers face up to the fact of higher processing requirements and more rugged conditions, two other trends affect the design of connectors. The first is to address SWaP, size, weight, and power consumption, to create systems that are smaller, lighter, and more capable. In high-performance aircraft, whether manned or unmanned, where space is always at a premium, weight has a direct relationship to flight times and payload, and efficient power distribution means smaller power-generation components. Thus, it is no surprise that system designers are obsessed with SWaP.

The other important trend is the use of commercial off-the-shelf (COTS) components, ensuring product availability when you need it. Even a new design can be COTS-based by using well-established and field-proven technology as building blocks for the design.

New levels of connector ruggedization can take two forms: 1) an entirely new connector or 2) an upgrade to an existing connector. Option 1 gives designers the most freedom, but at the expense of legacy product designs and standards. Option 2 offers backwards compatibility with existing connectors and board designs.

An example of Option 1 is TE Connectivity’s Fortis Zd connector. Even though the connector is relatively new, it has its roots in COTS. This connector, designed around military pedigree MIL-DTL-55302 Mini-Box contacts, is a new design that handles higher speeds (12+ Gb/s) and high levels of ruggedness. The connector has been considered for several standards, and finds applications where performance trumps standards.

For standards-based embedded computing, VITA 46 and 47 have been standards for measuring compliance and performance. These standards define mechanical systems packaging requirements as well as test requirements for shock, vibration, temperature, and other environmental stresses that systems in general, and connectors in particular, must withstand. Ruggedized connectors, such as the MULTIGIG RT 2 connector, specified for VITA 46 VPX systems, must meet VITA 47 requirements. More recently, some companies in the industry have looked beyond VITA 47 to even more stressful testing of connectors. The VITA 72 Working Group has created new levels of testing (torture testing, as it were) connectors well beyond the needs of anticipated application hazards. In doing so, the tests have led to improvements in connector design. One of the connectors tested was the MULTIGIG RT 2 connector. 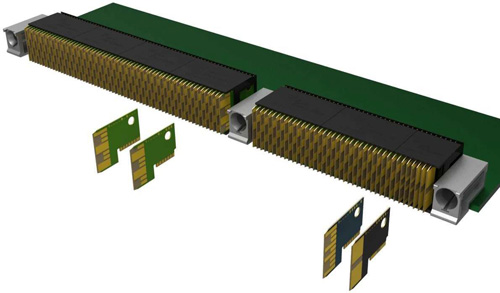 The connector uses a pinless design, wafers in the daughtercard half and split-beam, spring contacts in the backplane side (Figure 1). By eliminating pins, and consequently the problems of stubbing and bent pins, the pinless design helps to increase reliability and prevent damage during card handling and mating. The wafer-based design of the daughtercard allows each wafer to be individually configured: single ended, differential, power, or even hybrids. While another spec, VITA 46, specifies the types of connector modules for each module zone (P0 through P6), the wafer design gives designers the potential to mix and match wafers if necessary. A significant benefit for meeting SWaP issues is that the MULTIGIG RT 2 connector is the lightest VPX connector available, owing in large part to the lightweight wafer and connector construction.

Figure 2 shows one of the major differences in vibration testing between the VITA 47 standard and VITA 72 requirements, based on testing criteria created by Mercury Systems and the VITA 72 Working Group. RL3 is essentially the same as VITA 47’s V3. RL3 + 3 dB substantially increases the vibration level. This higher-power spectral density subjects connectors to much greater stress, increasing the potential for contact fretting and plating wear caused by the vibration-induced movement of contacts against each other. These higher vibration levels were also run for longer exposure times than in the prior VITA 46/VITA 47 testing. The general test sequence was: 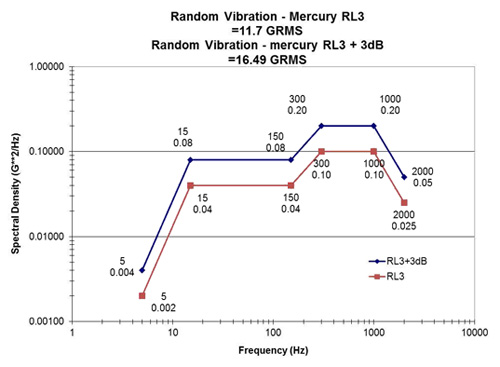 
Upon examination of the product tested by the VITA 72 working group, the original MULTIGIG RT 2 connector performed remarkably well; however, select locations along the 6U card showed high levels of wear, suggesting an enhanced contact solution would be desired.

Conventional connector wisdom says increasing the points of contact at the separable interface is effective because multiple contact points provide redundancy, thus increasing the reliability of the connection. Some have suggested that the sweet spot is four points of contact. For example, if the probability of contamination affecting the contact resistance is, say, 0.01 on a given contact, the probability for all four points of a four-point contact being simultaneously affected is (0.01) 4 or 10-8. This illustrates the power of redundancy. Part of the redesign included a major enhancement in the mated contact pairs while maintaining backward compatibility with the existing design. In the original connector, each contact spring beam makes a single point of contact with the wafer pads. In the newer version, the contacts have been redesigned so that each beam makes two points of contact, termed quad redundant, roughly doubling the contact patch area. Figure 3 shows the original and redesigned contacts. 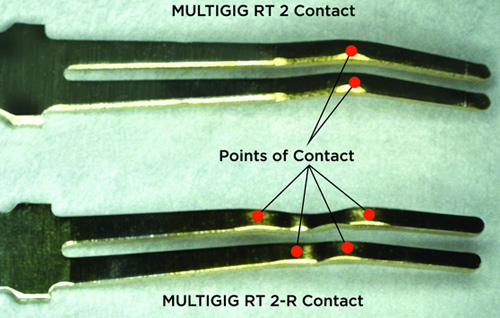 Figure 3: The redesigned MULTIGIG RT 2-R has four points of contact while the original version has two.

An important feature of the new enhanced design is that the contact beams and areas on the two beams are not symmetrical to one another. The difference in contact beam lengths means that each beam has unique frequency modes in response to vibration, eliminating the possibility of both beams achieving a resonance simultaneously. Even with increased contact points, the new enhanced contact system does not increase mating forces while helping maintain reliable contact under extreme vibration levels.

The wafers in the mating half were also slightly modified to take full advantage of the new beam design. Because two of the four contact points on the split beams are deeper, the signal pads on the wafer were extended 1.2 mm to maintain at least 2 mm of contact wipe during mating to maintain quad redundancy throughout the entire mating range of the original design.

Figure 4 shows the results of VITA 72 vibration testing on both the original and redesigned contacts for the contact set with the highest signs of wear. To inspect for indications of contact wear, each connector module was dissected and visually reviewed for signs of contact wear on both the original and modified contact systems. Although most of the contacts in the 6U arrangement are able to withstand this extreme vibration environment, there are specific contact locations that are susceptible to fretting wear. Most importantly, the wear that was experienced with the original contact design practically disappears with the new quad-redundant design. Interestingly, the choice of guide hardware also influences performance.

The role of guide hardware in helping ruggedize a connector is often overlooked. The primary purpose of the hardware is to help the mating process by providing card slot keying and initial alignment of the connector halves. Many guide posts and modules are economically manufactured using a die-cast process. To fulfill the keying and guiding function, post and receptacle can have fairly generous manufacturing tolerances common for die-cast parts. As a result, the guides play a reduced role in restricting motion during shock and vibration.

Machined guide hardware is gaining attention for challenging applications because the more precise fit has shown to reduce fretting motion. A precision fit in combination with a circumferential grounding spring helps stabilize the connectors in a high-vibration environment, as shown in Figure 4. 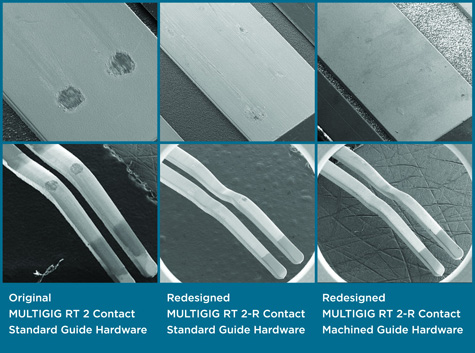 Figure 4: Comparison between highest wear locations from each 6U VPX test sample when subjected to the “torture test” led by the VITA 72 working group. Both contact design and accessory hardware influence connector performance in high-vibration environments.

The quad redundant contact design was also subjected to tests that simulate 10,000 mating cycles. This number of cycles is well above most reasonable application expectations in the real world. It serves, however, both to demonstrate reliability and to provide peace of mind in high-cycle applications, such as test platforms. The high-durability evaluation criteria were stable contact resistance and with no exposed nickel underplating at the contact mating surfaces. The goal was achieved (Figure 5), revealing that the connector mating-interface resistance was not only stable, but actually can improve after 10,000 matings and unmatings. This can be attributed to a polishing effect that smooth contact asperities to achieve a more intimate contact interface. 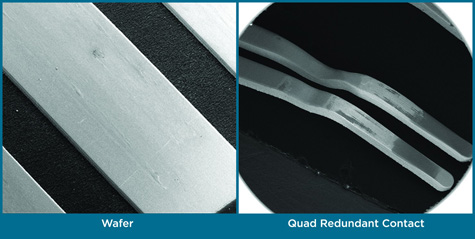 Since the MULTIGIG RT 2-R connector has the same board footprint and mating interface as the original connector, it is a drop-in replacement. The new quad redundant-backplane connector can mate with the original daughtercard connector; the only difference is that it maintains unique contact wiping distances on all four points of contact. For a new daughtercard connector mating with an original backplane connector, the main difference is an additional 1.2 mm contact wipe during mating, which offers greater margin for system insertion tolerances.

In looking for a more rugged connector for embedded computing, both options mentioned here can deliver robust performance. The Fortis Zd connector is an example of a new connector using proven, legacy contact technologies and a contact density about 20% higher than the original MUILTIGIG RT 2 connector (900 vs. 728). However, this new connector can only be used in applications that do not require standards-based (VITA) compatibility. On the other hand, the MULTIGIG RT 2-R connector is a high-performance example of upruggedizing an industry-standard design for a more rugged future.