Accelerometers are a key component in any portable or non-stationary device that needs to respond to motion or device orientation - not just game controllers and cell phones but even industrial robots and process control machinery.


Accelerometers are a key component in any portable or non-stationary device that needs to respond to motion or device orientation – not just game controllers and cell phones but even industrial robots and process control machinery. It isn’t enough to choose an accelerometer from its datasheet; you need to evaluate its performance in practice. This article will review two triple-axis accelerometer-based evaluation boards from Freescale and Texas Instruments that demonstrate just how useful accelerometers can be.

Freescale refers to its ZSTAR3 reference design as a demo, but with a better antenna, an enterprising OEM could shrink-wrap the boards and have a very saleable product.

The kit (see Figure 1) consists of a USB stick and a small wireless sensor board equipped with an ultra-low-power MMA7660FC triple-axis MEMS accelerometer. Using a 2.4 GHz ZigBee® interface, the PC-based access point can communicate with as many as 16 wireless sensor boards, tracking orientation as well as movement along three axes. In addition to the accelerometer, the sensor board utilizes an MC13213 chip, which combines an SO8 MCU with a ZigBee transceiver. The USB node pairs an MC13191 transceiver with an MC68HC908JW32 USB 2.0 full-speed 8-bit MCU. 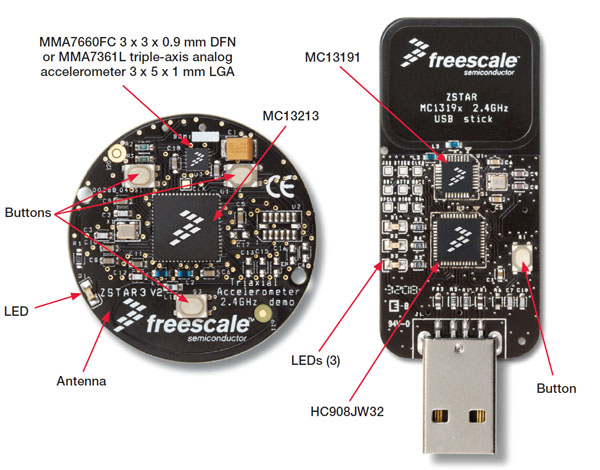 
The MMA7660FC is a ±1.5 g three-axis accelerometer with digital output over an I2C interface. Designed for low power operation, the 3 mm x 3 mm MMA7660FC draws 47 μA at 1 ODR in active mode, 2 μA in standby mode, and 0.4 μA when turned off. In addition, the MMA7660FC features an auto-wake/sleep feature to further conserve power. The sample rate can be varied between 1 and 120 samples per second, so you can make the usual trade-off of sensitivity for power depending on the application requirements.

The GUI that comes with the kit includes a number of applications that highlight the system’s capabilities: 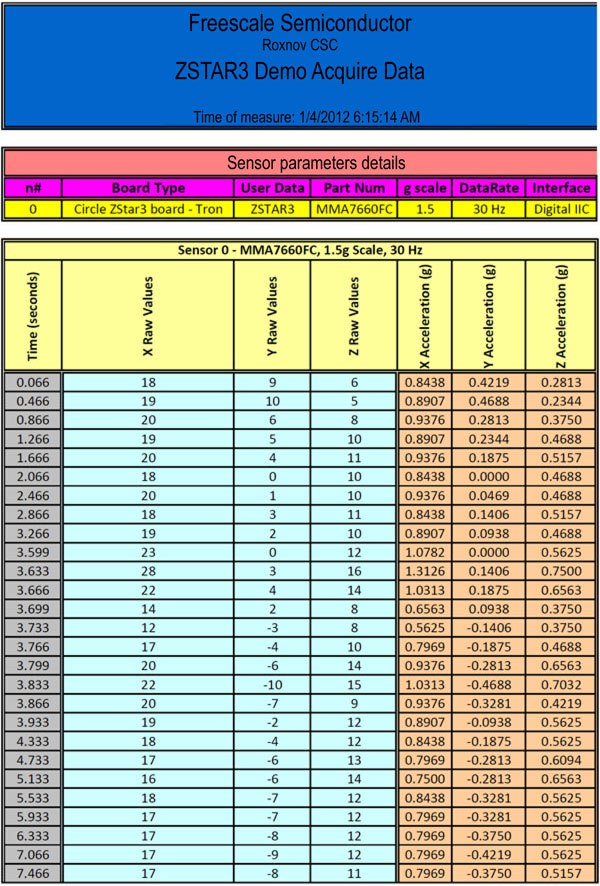 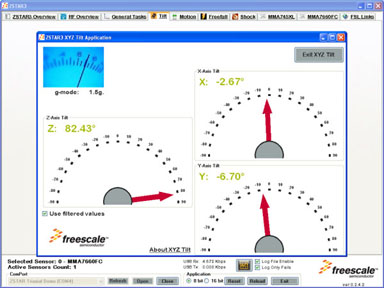 Figure 3: XYZ tilt demo (Courtesy Freescale Semiconductor).
There are many more demo applications too numerous to detail here – demos to detect when a user taps, shakes, or rotates his cell phone; to detect g pulses; to read registers; and to manage power.

In putting the ZSTAR3 kit through its paces, the only quibble I had is the lack of antenna sensitivity. We recently tried to use the kit as part of my daughter’s fourth-grade science fair project to try to determine just how much cats sleep (reportedly 16-20 hours per day). In the interest of science we mounted a ZSTAR3 accelerometer board in a pill bottle cap and hung it on our kitty’s collar; the idea being that any lack of motion for 15 minutes or more meant Oscar was asleep, and conversely. Everything worked brilliantly until Oscar got about 15 feet away from the access point. Facing the notebook to which the dongle was attached, the signal level was an acceptable if rather weak -65 dBm; when he turned in place 90 degrees, the signal dropped to -80 dBm before we lost contact, which we did by 20 feet under the best of circumstances.

Freescale’s very helpful apps engineer pointed out that while printed circuit antennas aren’t very efficient, they do have the advantage of being cheap, and they work fine for demo purposes – all of which is true. Still, if Freescale would replace their PC antennas with surface mount ones that display some gain, this demo system could suddenly become an off-the-shelf solution suited to a wide range of consumer, commercial, and industrial applications. 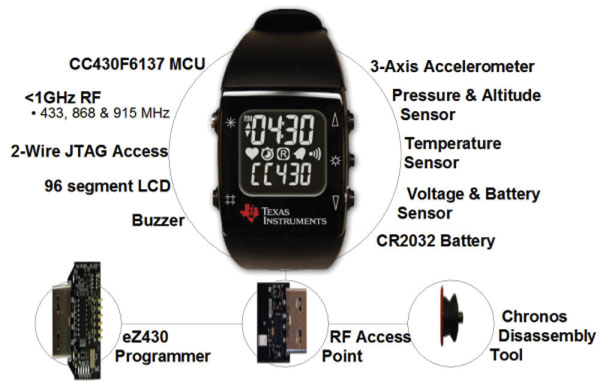 
Based on the CC430F6137 sub-GHz RF SoC, the eZ430-Chronos system features a 96-segment LCD display, a pressure and altitude sensor, a temperature sensor, a battery voltage sensor, and a three-axis accelerometer. Like the Freescale kit, the Chronos system consists of a wireless sensor node – in this case utilizing TI’s low-power SimpliciTI™ wireless protocol – and a USB-based CC1111 wireless interface to a PC.

The Chronos™ system is based on TI’s CC430 MCU, which combines a 20 MHz MSP430™ MCU; a low-power CC1101 sub-GHz RF transceiver; and a number of intelligent peripherals, including a 100 nA comparator, an 8-channel 12-bit ADC, a 96-segment LCD controller, and a 128-bit AES security encryption/decryption coprocessor. To get you started quickly, the kit includes free versions of TI’s Code Composer Studio™ and IAR’s Embedded Workbench® for the MSP430; RF stacks for SimpliciTI, BM Innovations’ BlueRobin™, W-MBUS, and 6LoPAN; and a number of production-ready open-source projects in heavily-commented ANSII C code. 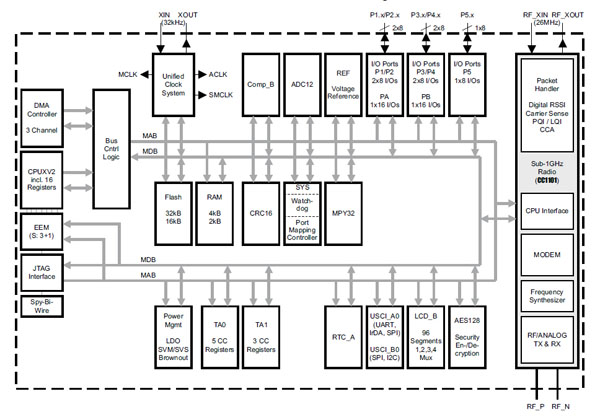 
Motion sensing is handled by a TI CMA3000-D01 three-axis ultra-low-power accelerometer with digital SPI and I2C interface. The device features user-selectable ±2 g and ±8 g measurement ranges as well as sample rate and frequency response. Power consumption is ≤ 70 µA with a 100/400 Hz sample rate and ≤ 11 µA with a 40/10 Hz sample rate.

TI’s choice of SimpliciTI instead of an open-source protocol may seem idiosyncratic, but there is a case for it. The stack is very small, fitting into <8 K of flash and <1 K of RAM; it was custom designed for just this sort of application, and it’s royalty free. SimpliciTI works in simple star networks while still enabling peer-to-peer communication. The networks can easily be extended using repeaters, which are created by reflashing the USB dongles using firmware supplied by TI. Once new nodes are energized, they quickly enumerate and pop onto the network. SimpliciTI utilizes a very basic core API, all of which is explained in the accompanying manuals and code. SimpliciTI supports sleeping devices, a feature that contributes significantly to battery life in the sensor nodes.

Chronos comes with two application programs: a control center that allows experimentation with the watch’s features and a data logger program. The control center program (see Figure 6) displays the accelerometer data in real-time; allows for wireless configuration and setting of the watch; and allows for the simulation of a connection to a heart rate chest band. If you have the actual chest band – which can be purchased – the program tracks the heart rate using the BlueRobin protocol, though the CC430 cannot handle two protocols at once. 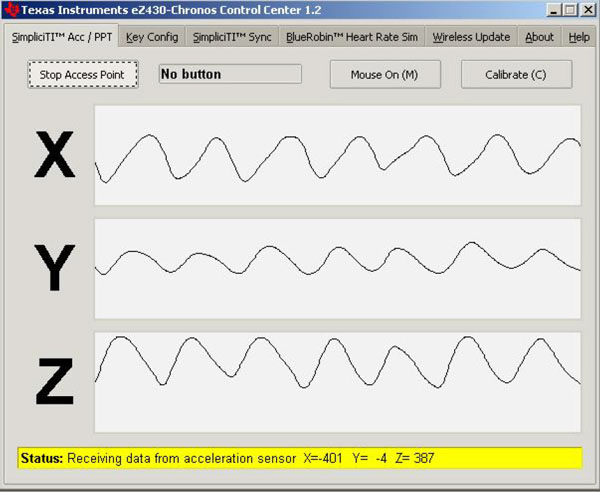 
The other supplied program is a data logger, which captures temperature, altitude, and battery voltage data. The Chronos chip must be reflashed to convert it from a watch to a data logging program; then the PC-based GUI can be used to collect and save the data chosen for later analysis. However, the GUI records everything other than accelerometer data. The source code for the GUI DLL comes with the kit, and if you take the time, you can reprogram both the GUI and the data logger as needed.

TI supplies a wireless update capability so the programs can be downloaded into the Chronos watch. Software updates and most changes can be completed wirelessly from the control program, which is quite handy. However, to substantially change the firmware – like changing the watch into a data logger, for example – you need to open the watch, take out the module, and connect it to the programming board.

The GUI that comes with the Chronos kit does not come with a full suite of demo applications like the Freescale kit, but it supplies the code for a number of sample projects that you can compile and run yourself. To do so, you need to use either Code Composer Studio v4.2 Core Edition or the IAR Embedded Workbench KickStart 5.10 (or higher). Both come with free versions that enable you to generate small programs, but license fees kick in if you want to do more. There are some programs in the kit that require the IAR tools, which are supplied with the kit. All sample programs come complete with both CCS and IAR project files and compile and run smoothly the first time out.

Try before you buy

Both the Freescale and TI kits clearly demonstrate how useful accelerometers can be in wireless applications; they also make it easy to start with their code to develop your own. Hotenda has product training modules for both the ZSTAR3 and Chronos kits that would be a good place to start checking them out – which, if you’re thinking of adding feature to your next design that requires an accelerometer, would be time well spent.