Method for measuring Ethernet throughput, providing a good estimate of performance, and illustrating the different factors that affect performance.


This article presents a method for measuring Ethernet throughput, providing a good estimate of performance, and illustrating the different factors that affect performance.

Ethernet is the most widely installed Local Area Network (LAN) technology in the world. It has been in use since the early 1980s and is covered by the IEEE Std 802.3, which specifies a number of speed grades. In embedded systems, the most commonly used format runs at both 10 Mbps and 100 Mbps (and is often referred to as 10/100 Ethernet).

There are more than 20 NXP ARM MCUs with built-in Ethernet, covering all three generations of ARM (ARM7, ARM9, and the Cortex-M3). NXP uses essentially the same implementation across three generations, so designers can save time and resources by reusing their Ethernet function when systems move to the next generation of ARM.

This article discusses three different scenarios for measuring Ethernet throughput on the LPC1700 product and details what is really achievable in an optimized system.

The NXP Ethernet block is distinguished by the following: 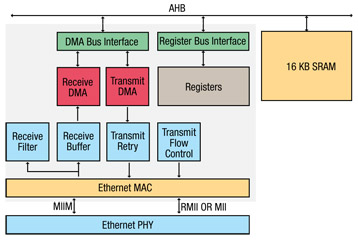 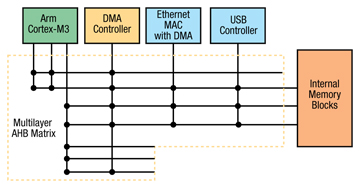 In an Ethernet network, two or more stations send and receive data through a shared channel (a medium), using the Ethernet protocol. Ethernet performance can mean different things for each of the network's elements (channel or stations). Bandwidth, throughput, and latency are measures which contribute to overall performance. In the case of the channel, while the bandwidth is a measure of the capacity of the link, the throughput is the rate at which usable data can be sent over the channel. In the case of the stations, Ethernet performance can mean the ability of that equipment to operate at the full bit and frame rate of the Ethernet channel. On the other hand, latency measures the delay in time caused by several factors (such as propagation times, processing times, faults, and retries).

The focus of this article will be on the ability of the NXP LPC1700 to operate at the full bit and frame rate of the Ethernet channel to which it is connected, via the Ethernet interface (provided by the internal EMAC module plus the external PHY chip). In this way, throughput will be defined as a measure of usable data (payload) per second, which the MCU is able to send/receive to/from the communication channel. The same concepts can also be applied to other NXP LPC microcontrollers supporting Ethernet.

Unfortunately, these kinds of tests generally require specific equipment such as network analyzers and/or network traffic generators, in order to get precise measurements. Nevertheless, using simple test setups it is possible to get estimated numbers. In fact, our goal is to understand the different factors that can affect Ethernet throughput, so users can focus on different techniques in order to improve Ethernet performance.

Considering a bit rate of 100 Mbps, and that every frame consists of the payload (useful data, minimum 46 bytes and maximum 1,500 bytes), the Ethernet header (14 bytes), the CRC (4 bytes), the preamble (8 bytes), and the inter-packet gap (12 bytes), then the following are the maximum possible frames per second and throughout:

The above rates are the maximum possible values which are in reality impossible to reach. Those values are ideal and any practical implementation will have lower values (see Figure 2).

In order to get the maximum throughput, there are 50 frames consisting of 1,514 bytes (including Ethernet header), each consisting 75 Kb of payload (useful data). The CRC (4 bytes) is automatically added by the EMAC controller (Ethernet controller). 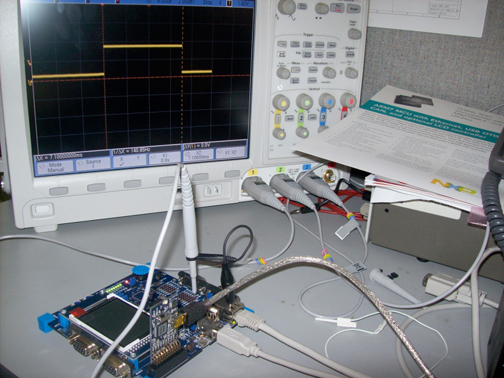 In order to measure the time this process takes, a GPIO pin is set (P0.0 in our case) just before starting to send the frames and is cleared as soon as we finish with the process. In this way, an oscilloscope can be used to measure the time as the width of the generated pulse at the P0.0 pin. The board is connected to a PC using an Ethernet cross cable.

The PC runs a sniffer program (WireShark in this case, http://www.wireshark.org/) as a way to verify whether the 50 frames were sent and the data is correct. A specific pattern in the payload is used so any errors can be easily recognized. If the 50 frames arrive at the PC with no errors, the test is considered valid (see Figure 4). 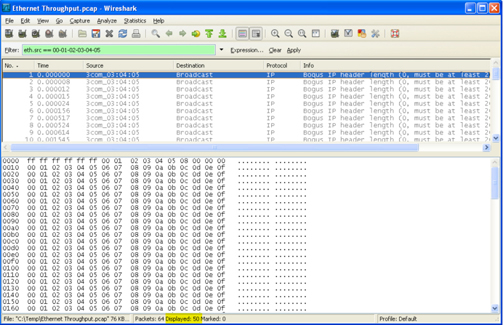 Test software in the form of a Keil MDK project is provided for this article (please check NXP's website for AN11053). The desired scenarios can be selected by using the Configuration Wizard and opening the "config.h" file (see Figure 5). Besides the scenario, both the number of packets to send and the frame size can also be modified through this file.

After running the tests, the following results are tabulated as demonstrated in Table 1: 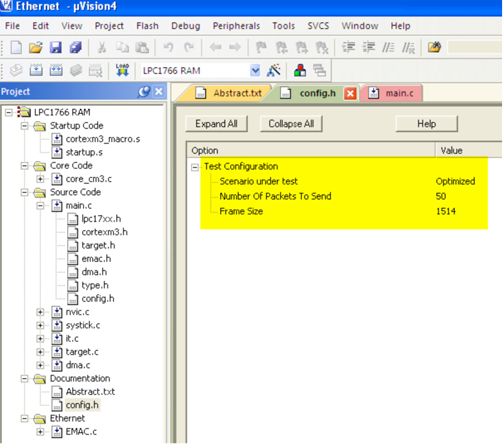 Despite the fact that Scenario 1 is not a practical case, it provides the maximum value possible for our hardware as a reference, which is very close to the maximum possible for Ethernet at 100 Mbps. In Scenario 2, the application's effects on the overall performance become apparent. Finally, Scenario 3 shows how an optimized application greatly improves the overall throughput.

Other ways to optimize the application and get better results were found by running the code from flash (instead of from RAM), and in some cases by increasing the number of descriptors.

In summary, Ethernet throughput is mainly affected by how the application transfers data from the application buffer to the descriptors' data buffers. Improving this process will enhance overall Ethernet performance. The LPC1700 and other LPC parts have this optimization built in to the system hardware with DMA support, enhanced EMAC hardware, and smart memory bus architecture.