Although the lukewarm sales figures the electric car industry has racked up so for the first half of 2012 could be interpreted as a harbinger of a failing market, it can also be interpreted as the early portion of the mass-adoption curve.


Although the lukewarm sales figures the electric car industry has racked up so far the first half of 2012 could be interpreted as a harbinger of a failing market, it can also be interpreted as the slow, “bumpy” early portion of the mass-adoption curve. Evidence of the latter, more hopeful scenario was in conspicuous abundance at the Electric Vehicles Land, Sea, & Air 2012 conference (see Figure 1),1 recently held in San Jose, CA, where EV technologists, component makers, and designers of some of the world’s most advanced electric cars, boats, and airplanes (yes, airplanes!) gathered to exchange technical information and shop for investors in the heart of Silicon Valley.

Figure 1: Looking like a cross between a Segway Transporter and a Hummer SUV, the RYNO, a self-stabilizing electric unicycle designed for security and police applications, attracted lots of attention at Electric Vehicles Land, Sea, & Air 2012.

This optimistic view of today’s “bumpy” market conditions was underscored by Dr. Peter Harrop‘s observation that, while all electric car makers (except Nissan) have experienced disappointing sales to date, sales of other types of EVs are growing rapidly, often without government subsidy. In his keynote, “Electric Vehicles: Revolution not Evolution,” Harrop pointed out that electric propulsion technologies had already staked out competitive positions in such unanticipated markets as hybrid outdoor forklifts, trucks, buses, and military vehicles. Harrop expects that the technology investments in advanced batteries, fuel cells, and motor systems that allowed Hyundai, Nissan, and Toyota and other manufacturers to profitably sell high-performance electric/hybrid-electric forklifts and other industrial vehicles will also pay big dividends as they are applied to on-road trucks and autos over the next few years.

This impending payout on strategic investments is most evident in the next generations of batteries, supercaps, range extenders, and energy-harvesting/re-capture technologies that are making their way toward commercial production. Even cost-conscious China is phasing out lead-acid batteries in most vehicular applications over the next five years as third-generation batteries using printed structures and nonorganic electrolytes from BSAF, IBM, and upstart Oxis Energy promise exceptional energy density and reduced or nonexistent fire hazards. While still too expensive for consumer products, some third-generation batteries are already flying in unmanned electric aircraft and driving military land vehicles.

At the same time, EV and EV component makers are not idly “waiting for Mr. Goodbat” to arrive and are actively developing battery management technologies that will get the most out of both today’s and future chemistries. Several companies, including Lithium Balance demonstrated advanced battery management systems that perform charge management, monitoring, protection, and performance optimization for both industrial and on-road vehicles. Lithium Balance’s2 systems are based on a modular, scalable, architecture that uses an embedded processor and chemistry-specific software to separately monitor and manage each cell’s state of charge/health and temperature without burdening the EV’s processing resources. The automotive-grade subsystem performs cell balancing, thermal management, and other critical functions autonomously and communicates the battery system’s overall status via a standard CAN bus interface (Figure 2). 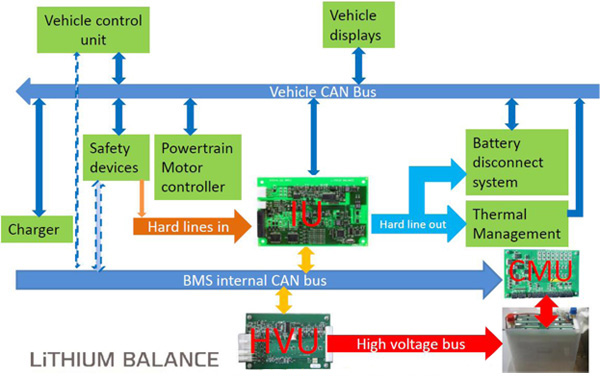 Figure 2: Intelligent battery management systems, such as those made by Lithium Balance, dramatically extend an electric vehicle’s range and battery lifetime without burdening the EV drivetrain’s processing resources. (Courtesy of Lithium Balance.)

Electron Vault3 also demonstrated its own unique battery packaging and management system, which claims to use so-called “intelligent clustering” techniques to boost system performance, endurance, safety, reliability, and longevity, while driving down overall cost. Designed for mass production, the modular battery case architecture uses a molded mat, known as the “cell joining layer,” that has a switchable interconnect matrix embedded in its structure. The mat is placed over the cell array to form electrical interconnection and current balancing between cells. Other elements molded into the flexible conductive matrix provide safety and thermal management functions. In addition to reducing battery system cost up to 50 percent and complexity by up to 90 percent, Electron Vault claims its systems enable EV manufacturers to quickly switch battery chemistries as market conditions and technologies evolve and, what’s more, to minimize the performance and range loss that normally occurs as cells age in a non-uniform manner.

Kleenspeed Technologies4 caused a stir with its turnkey energy storage system, on display in its EV-X11 electric formula racer that has a top speed of 160+ mph and has set several world speed records (Figure 3). The battery system, derived from Kleenspeed’s standard product line, integrates all management and faults detect/protect functions as well as a telemetry subsystem that supports both wired and wireless data connections. 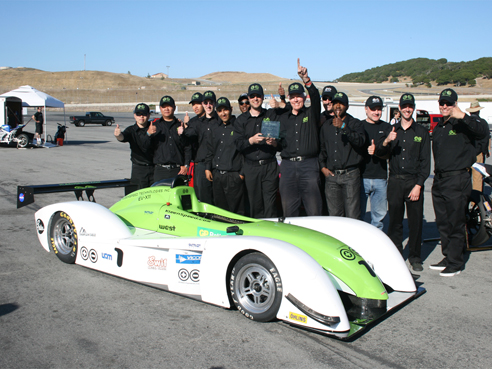 Fuel cells were also a hot topic as their steadily-improving performance, reliability and cost brings them closer to commercial viability for autos. The high levels of integration and automation apparent in Hydrogenics’ recently-announced Fuel Cell Power Module 2.0 Stack family provide a good example of the critical evolutionary steps being taken by the industry. As shown in Figure 4, the modules combine the cell stack with an integrated Balance of Plant section that includes fuel, air, and water management mechanisms, a coolant pump and control, and an embedded controller system. According to Hydrogenics, the new family of modules is available in capacities from 8.5 to 33 kW, delivers 50-percent-plus efficiency, a 10k+ Hour operating life, and has an automotive-grade operating temperature range. 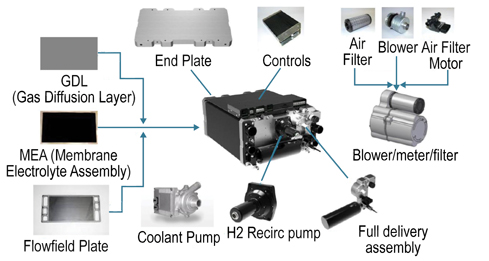 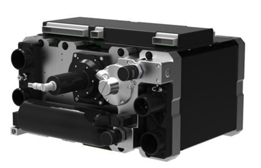 Figure 4: Hydrogenics’ latest family of fuel cell modules integrate a PEM cell stack with all the components necessary for its management and control in a compact, easy-to-service package. (Courtesy of Hydrogenics.)

Several fuel cell vehicles are already in early trial in production consumer vehicles, including Daimler’s new B-Class F-Cell minivan,5 which was on exhibit at the conference (Figure 5). The F-CELL’s fuel cell-dominant drivetrain combines a 90-kW fuel cell and a 1.4-kWh battery to deliver a top speed of 105 mph and a 250-mile range. Eventually estimated to retail for a pocketbook-pounding $70,000, the F-CELL is presently being offered for lease for $849/month to 70 California residents who are located near the small but growing network of hydrogen fueling stations. 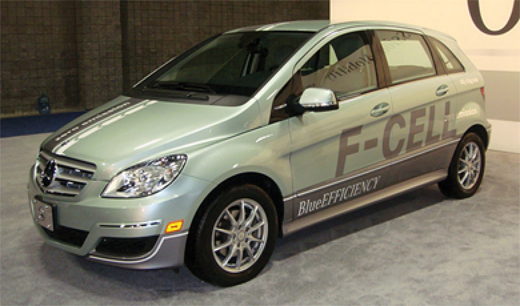 For most markets, it will be some time until fuel cells’ cost-per-watt becomes low enough to make them practical as the primary power source for autos. In the interim, they are beginning to work their way onto the consumer market as range extenders for battery-powered vehicles. Used as a range extender, a small fuel cell allows an EV to enjoy a 100+ mile range, with a much smaller, lighter battery, while enjoying improved performance and self-recharge capabilities. So-called hybrid buses using various mixes of Hydrogenics fuel cells, batteries and ultracapacitors have been built by over a dozen manufacturers (including industry giants like El Dorado, Daimler, Fiat, and Neoplan) are in field trials throughout Asia, Europe and North America. A similar strategy is being evaluated in delivery and over-the-road trucks, including a 2010 White Freightliner semi rig equipped with a 33-kW fuel cell and 73kWh lithium-iron phosphate battery set that allows it to tow an 80,000-lb load up to 400 miles.

The conference also included a track on electric propulsion for aviation applications, with talks on developments in battery-powered recreational aircraft and unmanned reconnaissance vehicles, as well as a talk by Pascal Chretien, developer/pilot of the world’s first human-carrying electric helicopter. The track also included a presentation by Tine Tomazic of Pipistrel, a Slovenian manufacturer of gliders and electric aircraft, and winner of NASA’s 2011 Green Flight aircraft efficiency challenge,6which required an aircraft to fly 200 miles in less than two hours and use less than one gallon of fuel per occupant, or the equivalent in electricity. 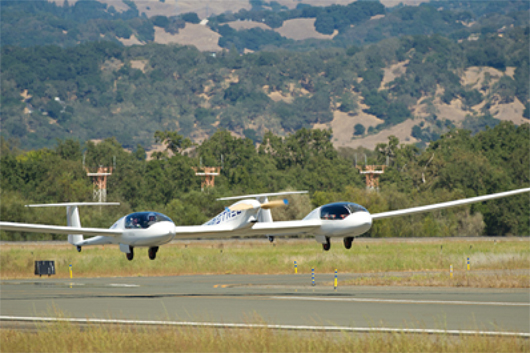 Pipistrel’s7 winning Taurus G4 (Figure 6) was built from a pair of stock 2-place electric gliders, connected by a custom carbon/Kevlar-honeycomb mid-wing structure that held an 1100 lb. 896-kWh battery and an electric drive system. In the economy run, the four-place Taurus G4 used a little less than the equivalent of 2 gallons of gas while flying four laps of a 50-mile triangular course while at an average 107 mph for a record-setting or 403.5 passenger-miles-per-gallon (pMPG). Much of the technology used in the Taurus G4 is already available in Pipistrel’s commercially-available Taurus Electro G2 electric-powered self-launching gliders and many of the new developments are expected to use other electric aircraft already in the design phase.