Micro-harvesting, or energy scavenging, relies on extracting power from minute but pervasive sources of ambient energy such as light, heat, RF, or vibration.


Micro-harvesting, or energy scavenging, relies on extracting power from minute but pervasive sources of ambient energy such as light, heat, RF, or vibration. With piezoelectric devices, energy from vibration can supply low-power applications, such as wireless sensors that are difficult to reach and maintain, for equipment or structural monitoring. By following a few key design considerations, engineers can build applications powered by piezoelectric transducers from Parallax, Measurement Specialties/Schaevitz, and Mide Technology and power management devices from Linear Technology.

Compared to other micro-harvesting energy sources, vibration and motion are relatively robust sources of ambient power (Figure 1). Placed on motors, for example, vibration-powered sensors can harvest power precisely when it is needed during motor operation. In a practical application, the piezoelectric transducer would likely be used to charge a high efficiency storage device rather than provide power directly to application circuits. For example, a typical micro-harvesting design might include a specialized battery such as the Cymbet Enerchip for storing charge during quiet periods or a supercapacitor such as a Eaton HB Series device for ensuring sufficient power during peak load periods for wireless data transmission.

Piezoelectric wafers are fabricated from a ceramic such as lead zirconate titanate (PZT) or fluoropolymer film such as polyvinylidene fluoride (PVDF). When subjected to mechanical forces that cause them to flex, these devices produce an ACvoltage proportional to the amplitude of the flexing movement. For use as vibration transducers, these materials are typically mounted in cantilevered structures, mounted to a fixed platform at one end and affixed with a tuning mass at the other (Figure 2). For example, the Parallax 605-00004, Measurement Specialties 0-1002794-0, and Mide Technology VR001 all are provided in their own variations of this basic cantilevered design.

When mounted on a vibrating object, these devices flex with a characteristic resonant frequency that depends on their physical characteristics, including their mass. By changing the mass, an engineer can change the resonant frequency of the transducer. In a vibration-powered micro-harvesting application, the effectiveness of a piezoelectric transducer depends heavily on its proper placement and tuning. In turn, both optimal placement and tuning largely depend on the specific nature of the device to which the piezoelectric is attached. The best placement naturally depends on identifying the location on the object of maximum sustained vibration.

To property tune a piezoelectric transducer, however, the engineer needs to fully understand the frequency profile of the vibrating object and find that object's own resonant frequency. For some applications such as motors, the characteristics and resonant frequency of the vibrations may be well known. For others, gaining sufficient understanding requires measuring the object's vibration with an accelerometer and analyzing the frequency characteristics of the captured data using fast-Fourier transform (FFT) analysis to find the resonant frequency. Mide Technology offers a specialized vibration characterization device, the Mide VR001 Slam Stick Vibration Recorder, for help in determining frequency profiles of vibration sources. 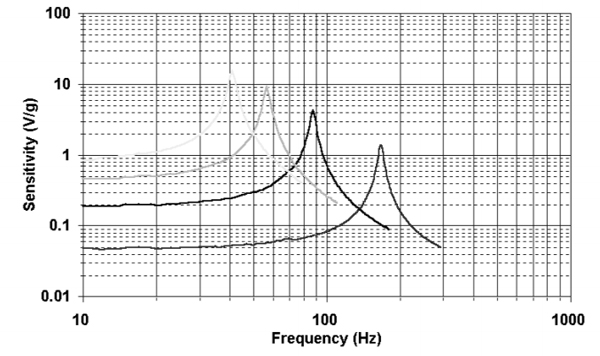 Figure 3: Increasing the tuning mass on a cantilevered piezoelectric transducer shifts the resonant frequencies -- in this case from 180 Hz with no loading mass to 90, 60, and 40 Hz with each incremental addition of a 0.26 g loading mass. (Courtesy of Measurement Specialties.)

With its Volture series transducers, Mide offers a range of devices designed to suit a range of frequency profiles and performance targets. The Volture series is based on Mide's QuickPack manufacturing process, which wraps a pair of piezoelectric wafers in a protective layer to insulate the devices. The wafers can be used separately or configured in series for increased voltage or in parallel for increased current. Volture offers a series of tungsten tuning masses for physically loading its piezoelectric transducers for resonant-frequency tuning.

Besides this physical loading, however, a piezoelectric device exhibits changes in its mechanical properties depending on the electrical load on the device. In fact, this method, called piezoelectric shunting, is used to provide active vibration damping in objects as diverse as downhill skis and space structures. Here, engineers tune the damping characteristics of piezoelectrics using shunt circuits ranging from simple RLC circuits to active devices.

Indeed, ensuring maximum output from a piezoelectric transducer requires careful attention to its loading. To ensure proper loading, engineers can use a high-efficiency power management circuit (Figure 4), comprising a bridge rectifier (D1-D4), a low-power comparator (U1), and a step-down converter (U2).

Figure 4: By maintaining the piezoelectric device at a fixed voltage, this circuit maintains maximum power output from the device. (Courtesy of Mide Technology.)

In this equivalent network, the optimum power transfer between the two occurs when the values of the resistors are identical. So for the transducer, the impedance match with the load occurs at the point where the transducer's loaded voltage is maintained at a value that is half its open-circuit voltage (Voc). The circuit shown (Figure 4) is intended to maintain the transducer's operating voltage at Voc/2.

Here, the storage capacitor C1 charges until it reaches the Voc/2 value determined by the values of R1 and R2. When the stored voltage exceeds this value (plus hysteresis), the buck converter is enabled, drawing from C1 until C1's voltage falls below the hysteresis threshold. At this point, the buck converter is disabled, repeating the cycle of charge and discharge of C1. Throughout this process, the voltage at C1 remains nearly constant. As a result, the piezoelectric device is held approximately at Voc/2 and is virtually unaffected by the buck converter's operation or the load from downstream circuits.

Engineers can build this type of circuit using low-power devices such as the Linear Technology LTC1540 low-power comparator and Linear Technology LTC1474 step-down converter. The LTC1540 comparator draws less than 0.6 µA supply current and features a quiescent current of 0.3 µA, and it requires only two external resistors to establish comparator hysteresis thresholds. Similarly, the LTC1474 step-down converter draws less than 10 µA at no load and draws 10 µA in standby.

For micro-harvesting applications, however, even the minimal power requirements of these individual devices may be difficult to support with the kind of sparse power budget available. Linear Technology addresses these concerns with the LTC3588-1 Piezoelectric Energy Harvesting Power Supply IC, which combines the key components of a micro-harvesting power management circuit in a single device. This device requires only a few external components to provide a complete piezoelectric energy-scavenging power supply design (Figure 5). 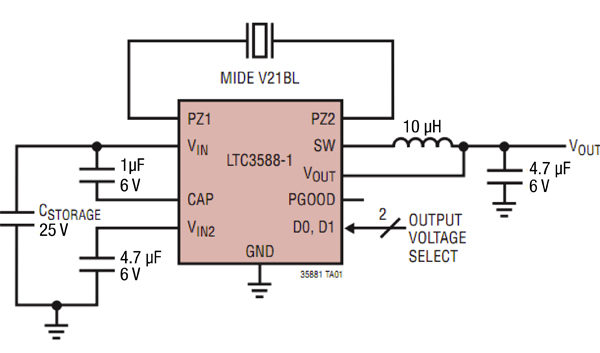 Figure 5: The Linear Technology LTC3588-1 requires only a few external components besides a piezoelectric transducer to provide a complete micro-harvesting power supply. (Courtesy of Linear Technology.)

Piezoelectric transducers can provide a significant energy source when combined with suitable power management circuits in micro-harvesting designs. By matching the transducer's vibration frequency to its attached object—and matching the power-management circuit load to the transducer's—engineers can extract maximum power from sources such as motors, structures, and the like. With the availability of low-power semiconductor devices, engineers can build effective micro-harvesting circuit designs that maximize harvested power without adding significant power requirements of their own.