The use of devices including energy transducers, power management ICs, and sensors to ensure safety of public infrastructure.

In 1967, the collapse of the Silver Bridge over the Ohio River resulted in 46 fatalities and spurred creation of more robust inspection requirements in the Federal-Aid Highway Act of 1968 and 1970. Nearly five decades later in 2014 the U.S. Department of Transportation (DOT) noted that 23.9 percent of the United States’ 610,749 public bridges were considered deficient either structurally or functionally.

While every driver is well acquainted with potholes and other, more apparent problems in road and bridge surfaces, structural damage can be much less obvious and more insidious. For example, structural engineers determined that the Silver Bridge collapse was caused by a mere 2.5 mm-deep defect due to stress corrosion cracking in a single structural component.

Today, engineers remain concerned about similar defects in existing infrastructure. According to the DOT, deterioration of roads and bridges arises from continual wear and tear due to traffic loads beyond their original design requirements and rapid aging due to that stress. SHM based on continuous monitoring of infrastructure is critical for identifying at-risk structures. In turn, wireless monitoring systems offer a practical SHM solution, avoiding the expense of wired systems and enabling simpler placement in existing infrastructure. Furthermore, the use of energy harvesting techniques for powering wireless sensors avoids the maintenance concerns for both safety and cost that would be associated with the use of batteries and their replacement in wireless sensor nodes.

For powering SHM wireless sensor nodes, engineers can take advantage of a variety of ambient sources, including solar, thermal, and vibrational, but the optimum choice is often determined less by technical considerations than the logistics, cost, and maintenance requirements associated with the target structure. For example, for roads in heavily trafficked urban areas, local requirements for noise barriers can suggest the use of photovoltaic (PV) panels for solar energy harvesting.

Thermoelectrical generators (TEGs) can serve as a compelling alternative in some situations. TEGs provide power proportional to the temperature differential across their structure. For highway infrastructure, such a differential exists between the pavement surface and its subgrade layers. As a result, while use of TEGs might be effective for SHM built into new construction, the cost of retrofitting existing roads might be cost prohibitive.

For roadways and bridges, vibrational energy generally offers a ready source of power and offers the distinct advantage of being a convenient solution for locations that are not otherwise exposed to bright sunlight or large temperature differentials. Using piezoelectric devices to harvest the vibrations from passing vehicles, engineers can place multiple wireless sensors throughout a roadway or bridge structure – embedding them relatively easily in either existing or new construction.

Piezoelectric devices, such as those from Measurement Specialties and Midé Technology, operate as voltage generators -- often modeled as a voltage source in series with a capacitance (Figure 1). Typically fixed on one end to form a cantilevered device, these devices deliver an output voltage that is proportional to the deformation of its crystalline structure. When allowed to flex both above and below its resting plane, these devices produce AC voltage output. 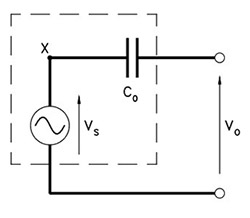 Figure 1: Piezoelectric devices are AC voltage sources that generate a voltage output proportional to the deformation of their structure. (Courtesy of Measurement Specialties) 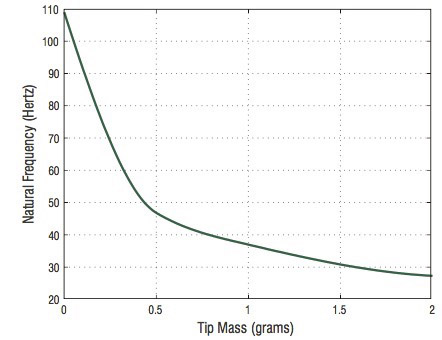 Figure 2: By using a heavier tip mass to increase the mechanical loading of a piezoelectric device, engineers can lower the device’s natural frequency as needed to match the predominant frequencies of the ambient source – and thus maximize power generation from the ambient-vibrational energy. (Courtesy of Midé Technology)

If the ambient source is dominated by frequencies well below the tunable range of available piezoelectric devices, engineers could also turn to alternatives such as electromagnetic generators for use as low-frequency vibrational energy transducers. Here, low-frequency vibrations would cause a magnetic core mounted on a spring to move through a coil, converting the vibrational energy to current according to Faraday’s law of induction.

An ambient-powered wireless sensor node typically combines a low-voltage microcontroller (MCU) and RF transceiver with an energy-harvesting subsystem for power conditioning and management. For vibrational energy harvesting, the energy harvesting subsystem relies on a full bridge to convert the AC output of the piezoelectric into useable voltage (Figure 3). In turn, power management ICs (PMICs) monitor the harvested energy, regulate the voltage supplied to the load, and use any excess energy to charge an external energy-storage device such as a supercapacitor or rechargeable battery.

Figure 3: A typical vibrational-energy harvester rectifies the output of the piezoelectric device (highlighted) and relies on a power management IC to deliver regulated power to the load while managing an external energy storage device. (Courtesy of Midé Technology)

Engineers can find highly integrated devices that simplify design of a suitable vibrational-energy-harvesting subsystem. For example, the Linear Technology LTC3588-1 combines an on-chip full-wave bridge rectifier, buck converter, and power management circuitry specifically designed to maximize energy harvesting from piezoelectric devices (Figure 4). To help optimize power extraction from low-energy vibrational sources, the device includes an undervoltage lockout (UVLO) capability designed to accumulate charge on an input capacitor until the buck converter can efficiently transfer a portion of the stored charge to the output. 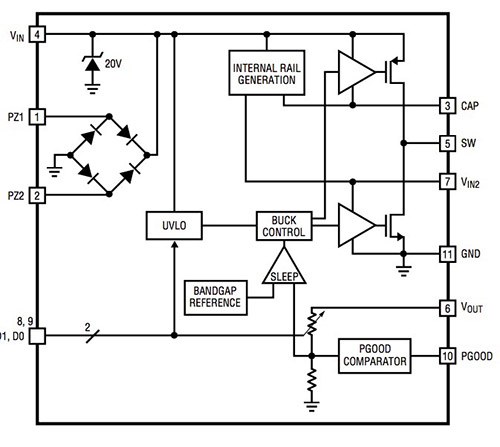 While the energy-harvesting subsystem provides power, the functional capability of a wireless sensor node relies on its sensors, processor, and communications capabilities. In a typical SHM application, engineers might combine vibration sensors with moisture sensors such as the HIH-5030 from Honeywell Sensing and Control and temperature sensors such as the TC1047 from Microchip Technology. Designed for low-power applications, these devices operate at supply voltages down to 2.7 V and consume minimal power. For example, the Honeywell HIH-5030 requires a supply current of only 200 mA (typical), while the Microchip TC1047 consumes only 35 mA (typical).

In these systems, however, the MCU and wireless transceiver typically dominate the power budget, dictating selection of ultra-low-power devices. In fact, engineers can find a broad array of solutions able to operate at low supply voltages with power consumption on the order of 200 µA/MHz. At the same time, these devices feature a full complement of analog peripherals required to acquire and process sensor signals.

MCUs such as the Atmel AVR ATtiny 8-bit MCU series can operate with supplies as low as 1.8 V while consuming only 200 µA/MHz, while the Silicon Labs C8051F9xx 8-bit MCU family can operate with a supply as low as 0.9 V. For more demanding application requirements, designers can find 16-bit processors such as the Microchip Technology PIC XLP 24F MCU series (195 µA/MHz) and Texas Instruments MSP430 MCU family (160 µA/MHz). In fact, TI’s MSP430FR5969 MCU takes advantage of the low-power requirements of its FRAM-based on-chip memory to achieve a power consumption level of only100 µA/MHz. For applications requiring 32-bit processors, engineers can turn to MCUs such as those in the Silicon Labs EFM32 32-bit Gecko family, which features 180 µA/MHz typical power consumption in active mode.

For wireless communications, transceivers operating at sub-GHz frequencies achieve an optimum blend of low-power capability and extended range. For example, the Linx Technologies LR series of ISM-band RF transmitters requires only about 5 mA while providing serial data rates up to 10 kbps at ranges up to 1 km. Alternatively, engineers can turn to sub-GHz wireless MCUs such as the Silicon Labs Si106x and Si108x, which combine an 8-bit 8051 core, analog peripherals, and a sub-GHz transceiver.

Structural health monitoring remains a critical requirement for ensuring the safety of public infrastructure. For monitoring the health of roads and bridges, wireless sensor nodes that rely on power extracted from vibrational energy offer a particularly cost-effective solution, providing a ubiquitous sensing capability without the need for eventual battery replacement. To simplify and speed design of these systems, engineers can take advantage of readily available off-the-shelf devices including energy transducers, power management ICs, sensors, ultra-low-power MCUs, and power-efficient wireless ICs.