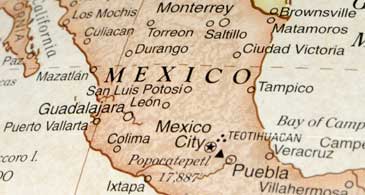 OEM buyers who are involved in outsourcing decisions can expect electronics manufacturing services (EMS) providers to beef up and expand their capabilities in Mexico over the next several years.

EMS providers say business in Mexico is growing as more OEMs outsource manufacturing of products to Mexico rather than China or other Asian countries. In most cases, EMS providers are building equipment in Mexico that will be sold in the United States and Canada. But in other cases, products built in Mexico are exported to Asia and Europe, according to executives. As a result, the North American EMS market, including Mexico, will post a compound annual growth rate (CAGR) of 8.9 percent as revenue rises from $66 billion in 2011 to $101 billion in 2016, according to Association Connecting Electronics Industries.

One reason electronics manufacturing in Mexico is growing is because labor rates in China are rising, so Mexico is looking more attractive to more OEMs.

Fully burdened labor costs, which include hourly wages and benefits, were $12.80 per hour at EMS providers for box builds at EMS facilities along the Mexican/U.S. border in the first quarter of 2012, while the labor cost in China was about $11, according to electronics outsourcing consultancy Charlie Barnhart and Associates, based in Maui, Hawaii. 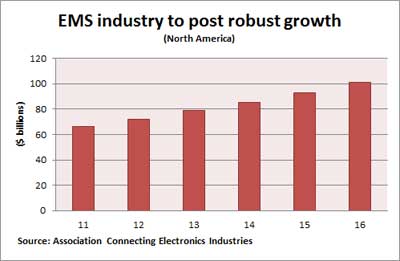 The North American electronics manufacturing services market will increase 8.9 percent annually through 2016 when the market will total $101 billion, according to the Association Connecting Electronics Industries.However, labor costs in China have increased about 20 percent for several years and will continue to increase, said Thomas Dinges, senior principal analyst, electronics and media for researcher IHS. Labor costs in Mexico increased by about 3 percent last year.

“After chasing really cheap labor for many years, OEMs realized that once you reach your bottom level with labor costs, there is only one way labor cost can go and that is up,” said Dinges.

In addition, the total cost of products for the North American market that are built in Mexico are lower when shipping and logistics costs are factored in. 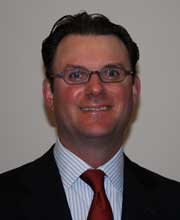 “After chasing really cheap labor for many years, OEMs realized that once you reach your bottom level with labor costs, there is only one way labor cost can go and that is up,” said Thomas Dinges, senior principal analyst, Electronics and Media for researcher IHS.When total cost is calculated, Mexico looks appealing.

“Mexico is an excellent manufacturing location for products that may be sold in the Americas as well as other parts of the globe,” said Gelston Howell, senior vice president, strategy and marketing, for EMS provider Sanmina-SCI, based in San Jose, Calif.

At its Guadalajara, Mexico facilities, Sanmina-SCI manufactures a variety of products for telecommunications, medical and industrial equipment OEMs. Howell said the optimum manufacturing location for a product depends on what region the product will be sold in, supply chain resources, logistics, maturity of the product, production volume and labor costs. The lowest price for labor is not reason enough to build in China or any other low labor-cost nation.

He said labor content as a percentage of total manufacturing cost is the key.

“For example, a large product with several complex and expensive subassemblies, but with low labor content relative to the overall system cost, might be a better candidate for production close to where it is being sold, since any difference in labor cost would be offset by freight charges," said Howell. Higher volume, complex products such as telecom base stations or cloud storage units and similar products are often produced in China and Mexico simultaneously, he said.

Another important point is the proximity of the manufacturing to the OEM and the maturity of the product.

“Some of our customers prefer working with Sanmina in a similar time zone during the launch phase for complex products in order to enhance their overall time to market,” said Howell. He noted with some complex products in new product introduction (NPI), there may be 10 or more engineering change orders (ECOs). 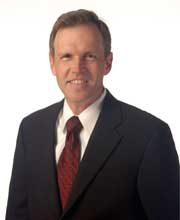 “Mexico is an excellent manufacturing location for products that may be sold in the Americas as well as other parts of the globe,” said Gelston Howell, senior vice president, strategy & marketing, for EMS provider Sanmina-SCI“If prototypes or early production units are being shipped over the ocean, a significant amount of ECOs may be processed before these units arrive in the region where they’ll be sold,” said Howell.

Then there are the shipping and logistics costs and issues. Rail and trucking companies can get products into the United States from Mexico very quickly.

“That is a real key thing for a lot of companies right now,” said Dinges.

They are looking at the total landed cost. Shipping products from China can take weeks and is more expensive.

Manufacture where you sell

Because OEMs are looking at total cost, many OEMs are adopting a regional outsourcing strategy. The idea is for a company to manufacture products in the market where it wants to sell. For North America, that means Mexico.

Though there is some global manufacturing in Mexico and it may increase in the future, most of the electronic equipment production in Mexico is for the North American market, said Paul Blom, executive vice president of operations for EMS provider SMTC, headquartered in Toronto. SMTC has manufacturing facilities in Mexico and China as well as the United States.

He said some OEMs that had outsourced manufacturing to China to take advantage of low labor rates are now moving manufacturing back to North America because of rising labor costs in China.

“We’re seeing more and more interest in Mexico by midsize OEMs of industrial products,” said Blom. He said many industrial OEMS realized labor costs savings when they moved manufacturing to China 5-10 years ago, but are now “rethinking their strategy.”

“They are resourcing with us back into Mexico, or they are choosing to build their next product family or the next release of an existing product in Mexico,” said Blom.

However, most of the growth in the EMS business in Mexico is organic growth, according to Dinges. Most high-volume manufacturing of consumer electronics products will remain in China because OEMs and EMS providers have invested in facilities, developed supply chains and want to have access to the growing Chinese market. 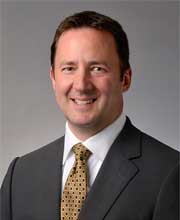 Many industrial OEMs are “rethinking their strategy and resourcing with us back into Mexico, or they are choosing to build their next product family or the next release of an existing product in Mexico,” said Paul Blom, executive vice president of operations for EMS provider SMTC.Much of the electronics manufacturing in Mexico is for mid-volume industrial equipment, including complex medical equipment, mass storage products, telecommunications base stations, automatic teller machines, automotive systems and other industrial equipment.

Although electronics manufacturing will grow in Mexico, crime including robberies, extortion, kidnappings, drug trafficking and other offenses may limit growth.

A recent study by Mexico’s National Institute of Statistics and Geography (INEGI), said that 37% of businesses were victims of crime in 2011 and most were victims more than once. However, the study found that the number of crimes against businesses was mostly likely higher because many crimes are not reported.

A 2011-2012 Chamber of Commerce study reported that 87% of the surveyed companies in Mexico had increased security measures or contacted authorities due to incidents of extortion or kidnapping, and more than half of the companies increased their investments in security during 2011.

“Companies that have not outsourced before and start looking at Mexico and read the headlines about crime get scared off a little,” said Dinges.

However, companies that have manufactured in Mexico for awhile “are not as concerned about it.” These companies “know how to deal with this. They know where their stuff is manufactured. They trust their partners. Their partners know how to keep the employees and factory safe. “