It is widely accepted that solar cells can be broadly categorized into one of three technology "generations." First generation cells are crystalline.

It is widely accepted that solar cells can be broadly categorized into one of three technology “generations.” First generation cells are crystalline. Second generation cells are amorphous thin films of silicon and other materials meant to reduce costs normally associated with conventional semiconductor wafer production.

The definition of third generation technology, however, is less clear, with the moniker “third generation” usually reserved for so-called emerging technologies. This group is sometimes described as including any technology capable of overcoming the Shockley–Queisser limit of power conversion efficiency (33.7 percent) for a single junction device. Most technologists would also include broad classes of other conversion devices including non-semiconductors such as polymer and dye-sensitized cells, tandem cells built from stacks of conventional materials (such as amorphous silicon or gallium arsenide), and nanotechnology. For an introduction to the various types of photovoltaic materials and cells, see the previous TechZoneSM article “Solar Cell and Photovoltaic Primer.”

Let’s now take a closer look at some of the candidates for “third generation solar cell” membership.

The dye-sensitized solar cell (DSC or DSSC) grew out of studies of photosynthesis (Figure 1). In the late 1960s, while working with chlorophyll extracted from plants, researchers at Berkeley realized that organic dyes could produce electricity at the oxide electrode of an electrochemical cell. Increasing the surface area for charge collection was recognized as the path to improving cell efficiency. Eventually, a team at the Swiss École Polytechnique Fédérale de Lausanne identified titanium dioxide (Ti2O) as the ideal anode material. This basic cell design is now fundamental to most DSSC research and is known as the Grätzell cell after its inventor. 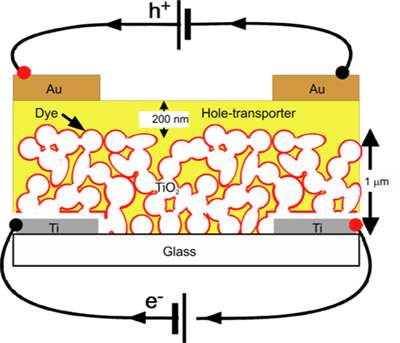 The DSSC can be tailored to the light conditions expected in service by modifying the organic dyes. These common chemicals are well understood, with their development dating to the earliest days of the textile industry. The second major constituent of the DSSC is TiO2. This material is also abundant since it is the preferred white pigment for many applications, from paints to papers to inks and even toothpaste. The extreme white is due to the high refractive index which leads to the use of TiO2 as an optical coating material as well as the blocking agent in many sunscreen lotions.

With TiO2 as a widely available, easy to produce, cheap and well-characterized material, the dye-sensitized solar cell has become very popular as the target of third generation cell research.

TiO2 naturally forms a very porous layer leading to a high surface area anode that improves the cell efficiency. But the more targeted research into this material has led to even higher surface area layers. Nanotechnology researchers have evolved TiO2 processing to create a number of different nanostructured materials. TiO2 is relatively easily produced in nanotube and nanowire forms that are perfectly suited to maximizing the efficiency of DSSC devices.

Many of the emerging cell types offer distinct advantages over traditional silicon photovoltaic, especially for applications in building integrated photovoltaics (BIPV) and uses where substrate flexibility is important. However, there are still issues that need to be addressed. For instance, DSC cells tend to have short lifetimes and other reliability concerns compared to the competition. And although DSSC leads the way for third generation technology with top cell efficiencies of over 11 percent, pushing it into the useful range for commercialization, progress has been relatively flat since the late 1990s. Fortunately, there are other nanostructure devices that have emerged more recently and have shown very rapid improvement in their short life (Figure 2). 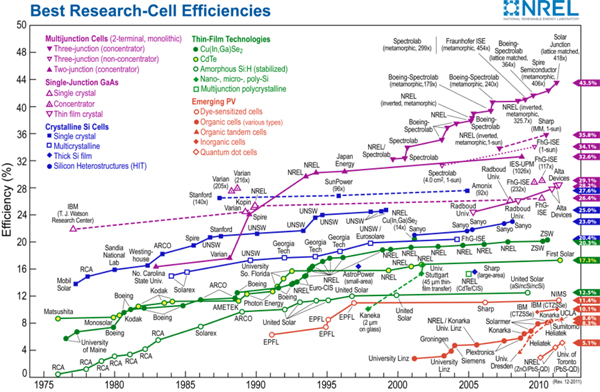 Figure 2: Trends in Solar Cell Efficiencies by Technology and Year (Courtesy of NREL).


The utility of nanostructures is not limited to the active area improvement they provide to dye-sensitized solar cells. The size of a particle can actually be used to engineer the properties of a material. Since the charge carriers are physically confined, their interactions can be tightly controlled to influence the bulk properties of the material. Quantum dots are a class of these nanostructures that allow the size of extremely small islands of a material to be used as a design parameter for the properties of a device. One academic group that has been involved in quantum dot research for many years is based at the University of Toronto. The team led by Professor Ted Sargent has been developing quantum dot technology for many applications. The Sargent Group recently experienced a breakthrough in their photovoltaic devices by setting an efficiency record for quantum dot solar cells.

The Sargent Group research is focused on colloidal quantum dot (CQD) photovoltaics. In their CQD technology, lead sulfide (PbS) nanoparticles are suspended in a carrier liquid. Application of the colloidal suspension to a substrate is by either spin casting or spray coating. As a result, the CQD photovoltaic is often referred to as “solar paint.”

The Sargent team has a long way to go to be competitive with even the trailing edge of thin film photovoltaic technology. But they have moved their device tantalizingly close. Since attaining the record of 5.1 percent efficiency, it is possible that continuous improvement may be all that is necessary to become competitive for the market that the “solar paint” could serve. For instance, multiple layers, each particle size tailored to a given wavelength, can be coated to harvest more of the energy spectrum contained in sunlight. Even for solar paint, it seems many thin coats are better than one thick coat. Commercialization of quantum dot photovoltaic might not depend on future revolutionary discoveries, but if one does come along, then solar paint could start displacing the crystalline devices that dominate the current market.

Silicon PV has life left in it

Although there is a great deal of promise for emerging solar energy harvesting technology, many conventional technologies will continue to be market viable for years to come. Consider the range of panel form factors possible from amorphous silicon. Sanyo thin film devices from 10 mm by 25 mm for the AM-1456CA and up to 150 mm by 37.5 mm for the AM-5902CAR, while utility-scale panels are measured by the meter and driven by the same volume production equipment enabled by the popularity of large flat screen televisions.

Crystalline silicon devices are also diverse. The Ixolar line from IXYS (Figure 3) offers cell efficiency of 22percent with a wide range of module configurations such as the larger SLMD481H12 78 mm by 90 mm with a full watt of peak output power. 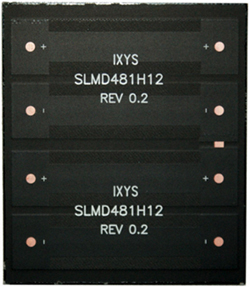 In 1954, Bell Labs pioneered the first solar cell, using $12,000 worth of these devices to run an ordinary household toaster. Now, after decades of research and progress that can only be described as a “less than Moore’s Law pace,” we seem to finally be on the edge of achieving third generation PV technology for capturing the limitless energy of the sun. So, the question that must cross the mind of the design engineer or purchasing manager involved in energy harvesting is this: should I put off a buying decision waiting for the next generation of solar cells? The answer, in a word, is no. While there is a good chance of a major breakthrough before the end of the decade, there is much to be done before third generation solar cells move out of the laboratory and into the work-a-day world. In the meantime you can find a good selection of current products to fit your energy harvesting design needs. For more information on the products mentioned use the links provided to access the product pages on the Hotenda website.