Electronica 2012 Shows the Latest and Greatest

A presentation of the most significant developments from this year's Electronica - and the item that may soon be available on our stock list for all Hotenda customers.


The electronic industry’s premium European event delivers as usual, and Hotenda was there to discover the latest innovations.

If you are serious about the electronics industry, there is really only one event in Europe that you absolutely must attend – electronica. Held every two years in the immense exhibition center in Munich, Germany, which in November accommodated over 2,600 exhibitors from 49 countries, it really is the industry’s premier exhibition and conference. Hotenda was present, as it has been for the last four events, making sure they were not only meeting the current needs of their European customers, but also future demands, by keeping up-to-date with the latest developments.

For those who were not able to attend, here is a roundup of the most significant developments from this year’s event — and be sure they will soon also be on our stock list for all our customers, wherever in the world they are based.

Norbert Bargmann, Deputy CEO of Messe Munchen, commented that automotive electronics, which accounts for an ever-increasing share of modern motor vehicles, was a central theme in all exhibition categories, buoyed by the interest in electric and hybrid vehicle technology – an area where electronics will play a key role.

The widely-reported increased semiconductor content in automobiles is not always about what’s under the hood; infotainment is a growing area of interest and, it seems, so too is the ability for individuals to personalize what can often represent our second-most expensive possession. One example of this came from mixed-signal specialist Melexis Microelectronic Integrated Systems.


The same application area has drawn the attention of ON Semiconductor, also at the exhibition, who announced its own version of the same device: a LIN-based, single-chip driver for dedicated multicolor LEDs for interior ambient lighting. Its solution, which falls in to its ‘System Basis Chip’ category (or SBC), integrates an RGB driver with three independent LED current regulators and a LIN interface for parametric programming of LED color and intensity. ON Semi explained that in a typical manufacturing flow, the NCV7430 would be assembled alongside an RGB LED chip, which could then be calibrated to compensate for LED spread. Auto-addressing allows differentiation between nodes.

Of course, safety remains paramount in the automotive industry and during the conference, Freescale and Continental announced that they are jointly developing the industry’s first quad-core microcontroller (MCU) specifically targeting a fault-tolerant environment. The project is named QUASAR, which stands for Quad-core microcontroller for Automotive Safety and Reliability.

Designed to meet SIO 26262 ASIL D and SIL3 according to IEC61508 applications, the cores run in lock-step with full symmetry, so there is no need to partition the software into safety-relevant and safety-not relevant categories. Freescale also confirmed that the low-level drivers developed for the family will be AUTOSAR 4.0 compliant, augmented by cycle-accurate simulation software for virtual prototyping.

In the world of microcontrollers, there are two parameters that are becoming more of a focus for manufacturers – power and cost. While both have always been important, today they not only differentiate a device but also effectively determine its viability in a number of low-end applications. As 32-bit ARM Cortex-Mx-based devices continue to make inroads in displacing 8- and 16-bit architectures in this application space, the power/cost parameters have proved difficult to match in a device that features a more powerful core. Until recently, that is.

Freescale was first to market with its ARM Cortex-M0+ based MCU family, Kinetis L, but now its position is being challenged with the latest development from NXP. For this class of device, customers seem to be demanding two things – a power consumption of less than 100 μA/MHz and a unit price of less than $0.50. Freescale managed to hit both of these targets with the Kinetis L, but NXP is hoping to break through them with its LPC800 family of ARM Cortex-M0+ based MCUs, which also consumes less than 100 μA/MHz, but will sell at less than $0.40 in volume, with a sub-$0.30 version coming ‘soon’.

NXP announced the LPC800 at electronica, stating that it has been developed ‘from the ground up’ specifically to replace 8-bit devices. The company even plans to make a version in a DIP-8 package.

While the family is based on the same super-slim Cortex-M0+ core as the Kinetis L, NXP has managed to differentiate the LPC800 family by employing an innovative solution to overcoming pin position and I/O conflicts, using what it calls the flexibly switch matrix. This allows any I/O to be routed to (almost) any pin and, it was indicated, means it could be configured as a pin-to-pin compatible replacement for other (8-bit) devices.

Another innovation — intended to help keep system power down — is a pattern matching engine, which provides a way of intelligently interrogating peripherals to determine when it is necessary to issue an interrupt, thereby allowing the core to remain in a deep sleep mode for longer. 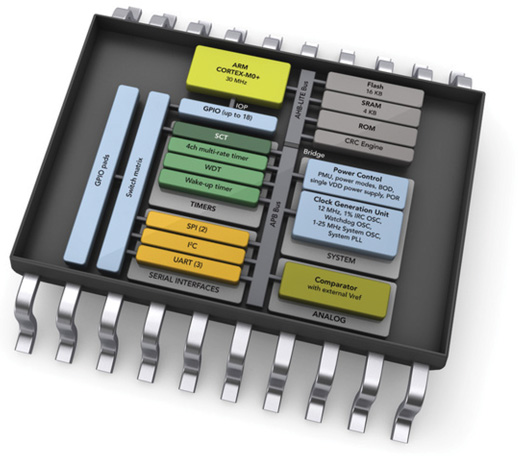 Figure 2: NXP’s LPC800 aims to take on 8- and 16-bit microcontrollers in terms of power, cost, and simplicity.

While Freescale is seeing success with its low-end Kinetis L family, the company also announced at electronica that its i.MX 6 Series of ARM Cortex-A9-based application processors has gone into volume production. This family of pin-compatible single-, dual- and quad-core devices spans a wide performance range and is already proving to be popular with single-board computer manufacturers.

Just prior to electronica, MSC announced it will start sampling its QX7-IMX6 board, which complies with the Qseven format and features the i.MX 6 processor in single-, dual- or quad-core configurations.

The Qseven format is expected to become an SGET standard by the end of the year, according to congatec. During electronica, the company announced the availability of a new Qseven starter kit based on its conga-QMX6 module. Since entering the SBC arena, there has been speculation that ARM-based devices will be popular, thanks to their scalable performance and large ecosystem. Freescale is arguably the main large semiconductor manufacturer to focus on the SBC, so far, and there is growing interest in its availability in the Qseven format. The conga-QMX6 module incorporates high-end 3D graphics applications and is matched with congatec’s Qseven carrier board and comes with a microSD card with Ubuntu pre-installed. 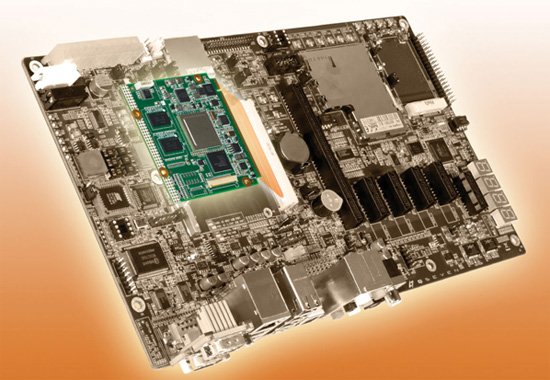 Figure 3: congatec’s QMX6 module employs the latest ARM-Cortex A9 based processors from Freescale.


In order to deliver a wide range of board support packages for the conga-QMX6 module, congatec also announced a new partnership with Adeneo Embedded. The first BSPs will support Linux, followed by Windows Compact, but it is unlikely that Android will be supported, while support for Windows RT will be ‘customer-driven’.

Adeneo is already a member of the Freescale Design Alliance Program and has worked with both congatec and Freescale in the past to develop low-level drivers, however this partnership ‘cements’ that relationship with the aim of bringing full BSPs to market.

With ever more focus on lowering system power, particularly when measured in the context of available global resources, it is not surprising that many companies exhibiting at electronica were announcing new solutions in delivering, monitoring, and managing power.

However, as well as those companies who specialize in power solutions, such as Vicor and CUI, some of the innovation was also coming from companies less associated with power, such as ADI and Microchip.

For its part, Microchip has developed a new range of fully-analog power conversion controllers and its first ever range of discrete power MOSFETs. Microchip says it is targeting point of load (POL) DC/DC conversion up to 30 V and it builds on the company’s range of drivers, which have been available for around 2 years.

Also targeting DC/DC conversion, Analog Devices (ADI) introduced its latest isoPower devices at electronica, which are not only unique in their technology offering, but also claim to reduce the board space required by 75% when measured against its competitors’ functional equivalent. The proprietary technology uses tiny integrated transformers instead of a module-based solution to isolation, and using the iCoupler variation can also add isolated data transfer in the same package. The new power/data devices (ADuM521x and ADuM621x) can deliver between 150 mW at between 3.15 and 5.25 V, with either 2.5 kV RMS (1 minute) or 3.74 kV RMS (1 minute) isolation.

With higher power, POL DC/DC conversion also in high demand, CUI was introduced its latest module-based solutions, which are available in 12, 25 and 50 A versions. CUI has a licensing agreement in place with Ericsson Power, which allows it to offer pin-compatible modules as a second source. The NDM2Z series is the latest addition to the company’s Novum Advanced Power product line, which targets the ICT (Information and Communication Technology) application space.

Power specialist Vicor was also exhibiting and used the show to introduce its first AC/DC front-end module in its VI Brick format. It represents the ‘next generation’ for Vicor, as it integrates rectification, filtering and transient protection. It also provides compatibility with Vicor’s DC/DC products to deliver a power solution from ‘the wall plug to the point of load’. 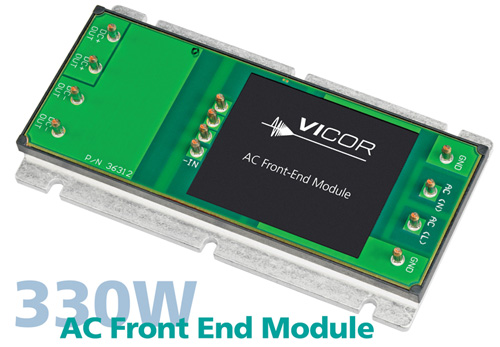 Other product introductions which were given a high profile included a new connector range developed and manufactured by Harwin. The Gecko G125 series breaks with tradition by featuring a 1.25 mm pitch, which, according to Harwin, has taken around 2 years to develop.

It is significantly smaller than its existing Datamate connectors, which have a 2 mm pitch, but due to the smaller size it is only capable of delivering 2 A per contact, as opposed to the 3 A/contact of Datamate. However, that is still 100% better than connectors with a comparable pitch, which can typically only deliver 1 A/contact. 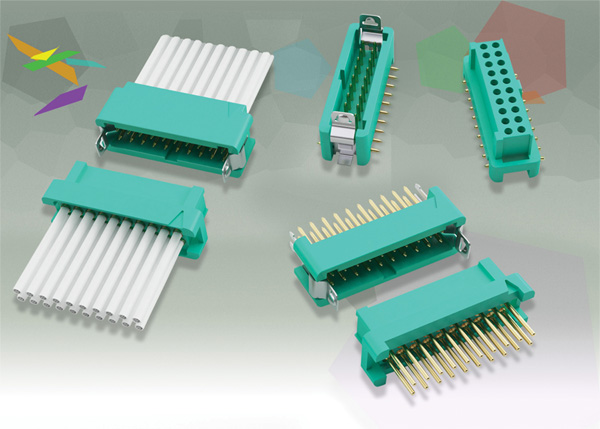 
Although announced prior to electronica, Cherry was showcasing its energy harvesting technology alongside its partner, NXP. Together they have developed a lighting solution that uses energy harvested by the action of pushing a switch to wireless control an LED fitted with NXP’s JN5168 wireless microcontroller. As a result, the switch needs no power source, allowing it to be fitted practically anywhere within range of the light fitting. As well as on and off, the switch is also capable of sending dimming data, so the LED light(s) can be dimmed as well as simply turned on and off.

Cherry has developed a proprietary protocol for its demonstrator but said it is willing to work with customers to customize the switch. Currently, the technology is capable of generating around 0.3 mJ of energy with each actuation, but Cherry said they are working on a new generator that will be able to produce nearer 1.5 mJ.

Another innovative product introduction came from Microchip, who has developed an E-field based gesture recognition device, which it has named GestIC. It is capable of detecting a hand in 3D space above the electrodes on a PCB, at up to 15 cm distance.

As it recognizes and discriminates in 3D space, it can detect three-axis of movement, opening up a number of application areas. It consumes just 150 μW in its active state, which means it could be used in battery-powered devices in an always-on state. Its low power means it consumes up to 90% less energy than a camera-based 3D gesture recognition solution. Microchip anticipates its uses will be numerous and is supplying it with a comprehensive library of gestures, including flick, track and click, as well as symbol/circle recognition.

As usual, electronica did not fail to disappoint its 72,000+ visitors and will, no doubt, provide enough innovative product introductions to keep us all occupied until electronica 2014!