An up-to-date summary of the current regulations worldwide in regards to the global regulatory environment of external power supply efficiency and no-load draw.

The global regulatory environment surrounding the legislation of external power supply efficiency and no-load power draw has rapidly evolved over the past decade since the California Energy Commission (CEC) implemented the first mandatory standard in 2004. With the publication of a new set of requirements by the United States DOE set to go into effect February 2016, the landscape is set to change again as regulators try to further reduce the amount of energy consumed by external power adapters.

Mandating higher average efficiencies in external power supplies has undoubtedly had a real impact on global power consumption. However, with the benefit of a reduced draw on the power grid come challenges and uncertainties for the electronics industry as it tries to keep up with this dynamic regulatory environment.

Original Equipment Manufacturers (OEMs) who design external power supplies into their products must continue to monitor the latest regulations to ensure that they are in compliance in each region where their product is sold. The goal of this article is to provide an up-to-date summary of the most current regulations worldwide.

In the early 90’s, it was estimated that there were more than one billion external power supplies active in the United States alone. The efficiency of these power supplies, mainly utilizing linear technology, could be as low as 50% and still draw power when the application was turned off or not even connected to the power supply (referred to as “no-load” condition). Experts calculated that without efforts to increase efficiencies and reduce “no-load” power consumption, external power supplies would account for around 30% of total energy consumption in less than 20 years. As early as 1992, the US Environmental Protection Agency started a voluntary program to promote energy efficiency and reduce pollution which eventually became the Energy Star program. However, it was not until 2004 that the first mandatory regulation dictating efficiency and no-load power draw minimums was put in place. The info graph below traces the path from the CEC’s 2004 regulation up to the new Level VI standards set to take effect February 2016. 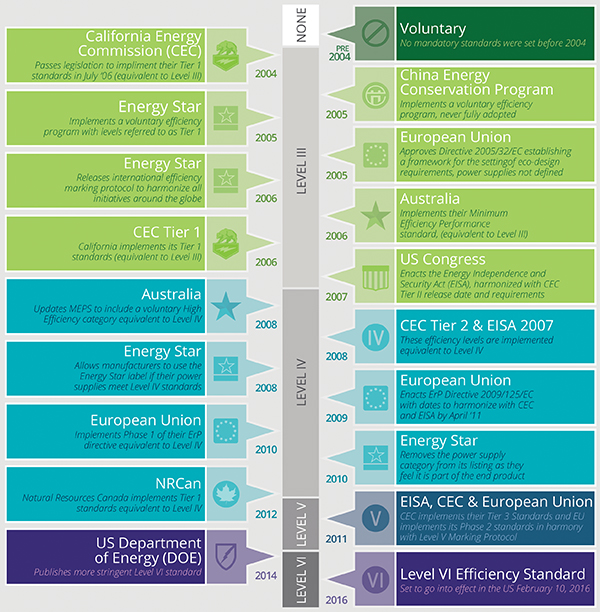 The Figure 1 timeline demonstrates just how dynamic the regulatory environment has been over the past decade. As different countries and regions enact stricter requirements and move from voluntary to mandatory programs, it has become vital that OEMs continually track the most recent developments to ensure compliance and avoid costly delays or fines. While many countries are establishing voluntary programs harmonized to the international efficiency marking protocol system first established by Energy Star, the following countries and regions now have regulations in place mandating that all external power supplies shipped across their borders meet the specified efficiency level:

Although the United States Department of Energy has established the more stringent Level VI standard, it is not set to go into effect until 2016. Today, Level V will meet or exceed the requirements of any governing body around the globe. Power supply manufacturers indicate compliance by placing a Roman Numeral V on the power supply label as specified by the International Efficiency Marking Protocol for External Power Supplies Version 3.0, updated in September 2013. This latest version of the Protocol provides additional flexibility on where the marking may be placed. 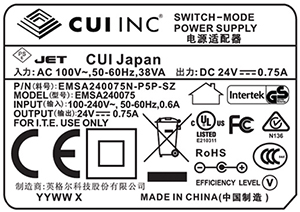 The European Union is currently the only governing body to enforce compliance to the Level V standard, though most external power supply manufactures have adjusted their product portfolios to meet these requirements. The adjustments are a direct response to the needs of OEM’s to have a universal power supply platform for their products that ship globally.

The table below summarizes past and current performance thresholds as they were established over time.

The internationally approved test method for determining efficiency has been published by the IEC as AS/NZS 4665 Part 1 and Part 2. The approach taken to establish an efficiency level is to measure the input and output power at 4 defined points: 25%, 50%, 75% and 100% of rated power output. Data for all 4 points are separately reported as well as an arithmetic average active efficiency across all 4 points.

The European Union has instituted similar exemptions to the United States. External power supplies for medical devices, battery chargers, and service products are exempt. In addition, an exemption exists for low-voltage EPS devices. Low-voltage external power supply means a unit with a nameplate output voltage of less than 6 volts and a nameplate output current greater than or equal to 550 mA.

Power supply manufactures, including CUI, are already preparing for the coming transition to the more stringent Level VI standards. Along with tightened regulations for existing adapters, the new standard expands the range of products that fall under the standard. Regulated products now include:

The new performance thresholds are summarized in the table below: 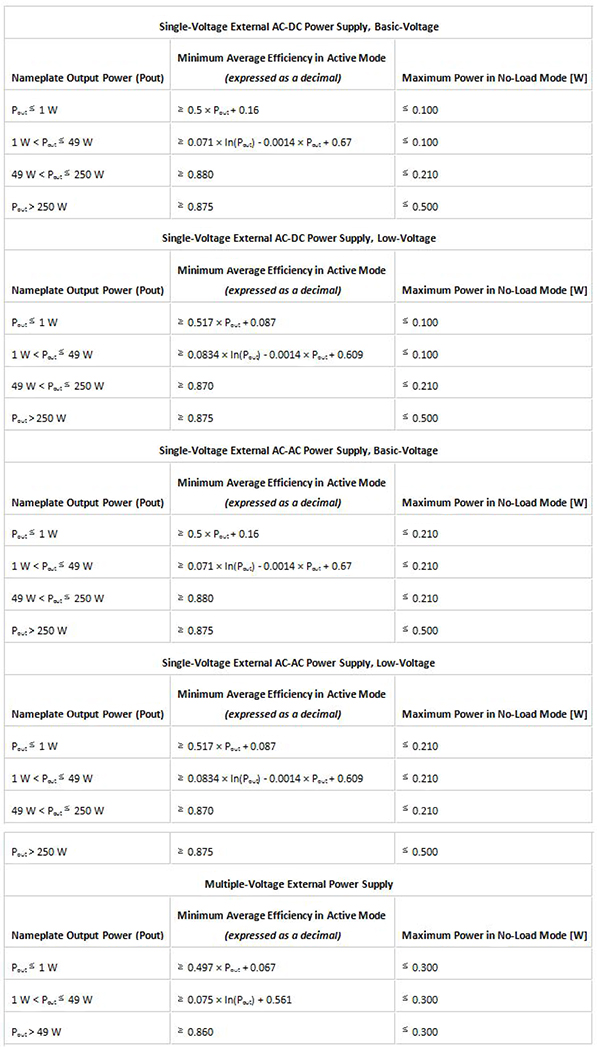 The new Level VI mandate also defines exemptions for EPS products. The direct operation EPS standards do not apply if:

The compliance date for the new requirements has been set for February 10, 2016, two years after the rule's publication in the Federal Register. It is important to note that compliance with the new standard will be regulated from the date of manufacture, so legacy products still can be shipped as long as the manufacture date is prior to February 10, 2016. Labeling requirements will be required to meet the same International Efficiency Marking Protocol for External Power Supplies Version 3.0 as the current Level V standard.

Globally, it is expected that other nations will soon follow suit with this standard. In the EU, the mandatory European Ecodesign Directive for external power supplies is currently going through revision discussions and it is expected to harmonize with most, if not all, of the US standards. It should be expected that countries with existing efficiency regulations in-line with the US, including Canada and Australia, will move to harmonize with the new standard as well.

The EPA estimates that external power supply efficiency regulations implemented over the past decade have reduced energy consumption by 32 billion kilowatts, saving $2.5 billion annually and reducing CO2 emissions by more than 24 million tons per year. Moving beyond the mandated government regulations, many OEMs are now starting to demand “greener” power supplies as a way to differentiate their end-products, driving efficiencies continually higher and even pushing the implementation of control technologies that in some cases eliminates no-load power consumption altogether. In late 2014, CUI Inc began introducing Level VI compliant adapters to keep their customers one step ahead of the coming legislation. Moving forward, CUI will continue to look for ways to implement the latest energy saving technologies into their external power supplies in order to address market demands and comply with current and future regulations. Hotenda carries a variety of Level V- and Level VI-compliant power supplies and features several of the Level VI-compliant devices on their website.