This article will look at the various touch control technologies developed by companies like Atmel, Freescale, and Analog Devices.


Mention 'touch sensors' or 'touch control' today and most people will tend to think of touchscreen displays, whether these are the cash machines (ATMs) used by banks, the self-scanning checkout terminals in grocery stores, or increasingly our smartphones, tablet computers and e-reader devices. These uses certainly reflect the advances that this technology has brought to our modern life, but not every application requires this level of sophistication and more basic touch sensors still have a role to play in providing convenient, easy-to-use controls. Lighting, for the home, office or factory, is a prime example where often all that is required is the ability to turn lights on and off or apply a simple dimming function. While touch control of lighting is not new, the broader developments in touch sensing have seen a proliferation in dedicated ICs that make it even easier and more cost-effective to design touch controls for lighting.

This article will look at the various touch control technologies developed by companies like Atmel (AT42QT1012, AT42QT1010, AT42QT2100), Freescale (MPR031) and Analog Devices (AD7148), focusing on the products which are specifically intended to support simple single-touch button, wheel and slider controls. The aim will be to understand the ease with which these devices can be incorporated into lighting applications and the end-user benefits they offer.

Why touch control for lighting?

Before considering where touch controls may be advantageous, it is perhaps helpful to consider lighting in a broader context to appreciate the multitude of applications and the segmentation of the markets into which they fall. Then we can proceed to look at the types of switches and other controls currently deployed to see where the potential benefits of touch sensing technology may be applicable.

As noted already, touch control of lighting is not new. A web search will return no end of results that are dominated by consumer products and controls for domestic lighting. Many of these are for mood lighting, desk, table and bedside lamps and vanity products (e.g. illuminated make-up mirrors), but it is interesting that there is clearly a strong demand for after-market products that replace standard wall switches. So what is driving this demand? Inevitably, there is no single answer and it is often not for purely practical or ergonomic reasons – with style, sophistication, and simply being perceived as a ‘cool’ technology providing some of the more emotive responses to this question. Certainly, from a practical standpoint, the ability to touch the body of a table lamp to turn it on or off can be a lot easier than fumbling, perhaps in the dark, for a mechanical switch that may be up inside the lampshade or incorporated in the power cord. The commonly added facility to be able to touch once, twice, or three times to achieve various brightness levels is another benefit. These advantages extend to wall switches where locating a touch plate can be simpler than operating a rocker or toggle switch or the dial or slider of a dimmer switch. Another benefit of capacitive touch sensing controls is that they can be made safe (by operating at lower voltage) for use in bathrooms, kitchens, or other wet environments, so they can be used in place of ceiling mounted pull-cord switches.

Many of the same features and benefits of using touch controls for domestic lighting apply equally to commercial or even industrial environments. The key distinction though being the need to ensure the application of such controls provides a rugged and reliable solution. Fortunately, this is a natural advantage of capacitive touch sensors, which do not suffer the mechanical wear of moving contacts and so are inherently more reliable. In addition, because the sensor can be placed behind a sealed surface, the electronics are protected from environmental contaminants such as moisture and dirt. While style and sophistication may still be pertinent for offices, switches in factories need to be conspicuous and unambiguous in how they operate. Another difference is that the deployment of lighting controls in these types of buildings is unlikely to be the simple retrofit of individual wall plates, more likely part of a new construction or major renovation program that may well combine touch controls with other sensors (e.g. movement) for more automatic lighting control.

With most lighting systems powered by mains electricity, power consumption may not be a designer’s first priority when evaluating lighting controls. However, in an era when energy conservation is pervading all aspects of our lives, it makes nonsense of the deployment of low-energy lamps (compact fluorescent, halogen, and now LED bulbs) if we then squander energy in moving from mechanical switches to electronic controls. Consequently, in considering touch control devices, parameters such as operating voltage and current and the availability of any low power modes are important selection criteria.

Which touch sensors are best for simple lighting control?

Rather than answer this question from a theoretical perspective, and be left wondering how to implement a solution, it seems better to take a more pragmatic approach by looking at some of the more relevant products on the market today to understand the features and benefits they offer.

Atmel provides touch solutions for everything from single button replacements for mechanical switches, to powerful microcontroller devices for smart phones and tablets. Its QTouch® technology (see Figure 1) uses a charge transfer method for touch or proximity sensing that works by charging an electrode of unknown capacitance to a known potential. The charge is then transferred to a measurement circuit where, after one or more charge-and-transfer cycles, the capacitance of the sense plate can be determined. Placing a finger on the touch surface introduces external capacitance. This affects the flow of charge at that point, and can therefore be registered as a touch. The circuit can also detect the proximity of a finger, rather than absolute touch. The QTouch technology uses spread spectrum modulation and sparse, randomized charging pulses with long delays between bursts to reduce RF emissions and susceptibility to electromagnetic inference – this also helps lower power consumption and, in multiple button applications, minimizes cross-sensor interference. 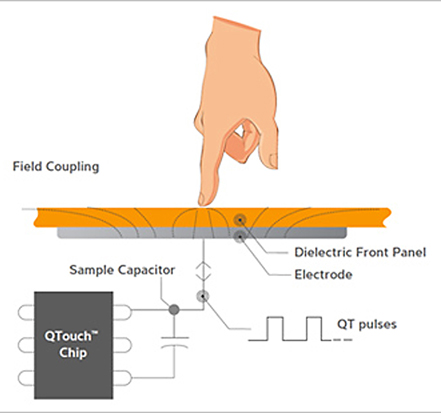 
For the kind of controls we are considering, the Atmel QTouch range of application-specific ICs covers requirements for single and multiple buttons with versions that cater for slider and wheel functionality. At the single button level, its AT42QT1012 device provides the basic function of a touch-on / touch-off (toggle) switch with a single-pin digital output (programmable to be either active high or active low). It also includes an auto switch-off feature to turn power off after a specified time delay from minutes up to an hour, which might be useful in certain lighting scenarios (e.g. the communal hall and stairways in apartment buildings). As the device projects a touch or proximity field up to several centimeters through dielectric panels made of glass, plastic or ceramic, it enables the type of bathroom and kitchen controls highlighted earlier. A closely related device, the AT42QT1010, offers similar performance but without the toggle feature; instead, once activated and, to avoid problems if the sensor is obstructed, it will reset after a maximum period of 60 s to ensure subsequent touches can be detected. The AT42QT2100 is another Atmel device relevant to this review; it has ten QTouch channels, supporting up to seven buttons and either a slider or wheel function, enabling a more intuitive and ergonomic control for dimming lights. Atmel’s QTouch products are fully supported by evaluation boards and development kits. 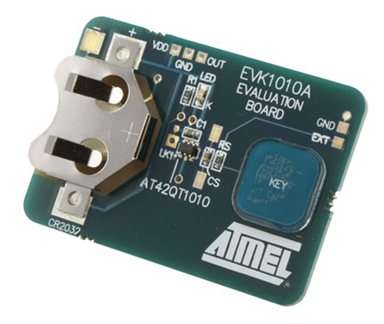 
Freescale is another IC manufacturer that offers capacitive touch sensor controllers with similar baseline functionality to the Atmel products reviewed above, but also with some differences that may make them more, or less, suited to certain applications. Its MPR03x series is targeted at switch replacement in a range of applications that includes lighting controls. The MPR031 supports either two or three electrodes, depending on whether the application requires an interrupt (IRQ). It features auto-calibration and separate touch and release trip thresholds for each electrode to provide hysteresis and ensure independent button operation. One key difference to the Atmel single-button sensors is with respect to the digital output. The Atmel parts have a simple logic output that can easily connect to the power control device. This actually switches the lighting circuit whereas the MPR031 has a serial I²C output, which may be fine for interfacing to other microcontrollers as part of a larger lighting control system, but is not necessarily so convenient for a more basic standalone application such as a desk lamp. Note that the Freescale MPR032 is identical to the MPR031 except for having an alternate I²C address. Another difference to note is the operating voltages, which are 2.0 – 5.5 V for the Atmel QTouch ASICs and 1.71 – 2.75 V for the MPR03x parts. Freescale provides comprehensive support for all its touch sensor controllers with demonstration boards and software-based evaluation tools.

Analog Devices, as one might expect from a company noted for data conversion products, describes its AD7148 touch controller as a “programmable capacitance-to-digital converter (CDC)” and majors on the device’s femtofarad (fF) resolution. It provides a versatile touch control solution, connecting up to eight sensor inputs via a switch matrix to a 16-bit, 250 kHz sigma-delta converter, enabling button, slider and wheel applications. Like all the devices we have considered, the AD7148 has built-in calibration circuitry that can compensate for environmental changes. It operates from a 2.6 – 3.3 V supply with a maximum operating current of 1 mA but just 21.5 μA in low power mode.

Other manufacturers of touch control devices include IDT (with its Puretouch products), Cypress (with its Capsense® family), and STMicroelectronics. This article has not attempted to provide an in-depth review or analysis of these or indeed other devices. Rather, it has tried to identify the common features and trends and the differences from one vendor to the next. All are based on some form of microcontroller and consequently operate from low voltage supplies (typically around 3.3 V, but some at 5 V) and most use an I²C interface for data output (and other control/communications). Some offer additional outputs e.g. for LED indicators or sounders. Within the various manufacturers’ product families are devices that range from 1- or 2-button controllers upwards. The implementation of sliders and wheels requires multiple touch elements, and devices that support this are often distinguished from other multi-button devices intended for use with switch matrixes such as keyboards.

This article has looked at the use of touch sensing for lighting control, the presumption being that touch sensing is not the preserve of high-end applications like smartphones. However, what is evident is that many of the products on the market today have benefited from the development of touch screen technology and particularly the use of microcontrollers to process the signals from the sensing elements. This has resulted in solutions that are far more capable and reliable than older, discreet touch sensing circuits, while still providing the basic functionality of on/off switches or simple sliders or wheels for dimming.

The products reviewed demonstrate that the processing capability present in these circuits has enabled more sophisticated capacitance measurement techniques with features such as auto-calibration. Yet these are not expensive devices, and neither do they consume significant power – a single button controller costs around 50 cents and consumes just 60 μW (32 μA @ 1.8 V). As always, choosing the right product comes down to a selection process that starts with the basic functionality required, single- or multi-button or slider or wheel, refined by secondary considerations such as type of output signal or operating voltage. Ultimately, this will be the designer’s choice, but hopefully this article has helped appreciate the differences.