Fabs and component factories shut down in the aftermath of the 8.9 magnitude quake. 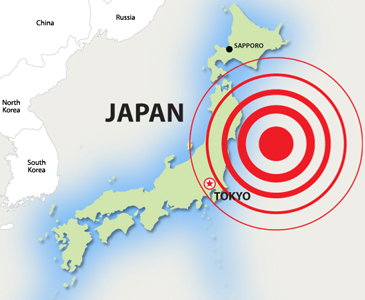 The massive earthquake and tsunami in Japan that devastated entire towns and killed thousands has also disrupted the electronics supply chain as some semiconductor fabs and factories that make chips, components, silicon wafers, and other electronics materials were shut down.

Some semiconductor fabs closed because of damage caused by the 8.9 magnitude earthquake. Other fabs and component factories shut down because of rolling blackouts and transportation issues. In some cases, electronics manufacturing facilities were closed to allow employees to take part in recovery efforts.

Suppliers and industry analysts said if plant shutdowns last for less than a month, there won't be much impact on the electronics supply chain because suppliers have a month or two of inventory. In addition, other suppliers are likely to pick up the slack and increase production of key components and materials.

However, if shutdowns last longer than a month, shortages could result, especially for memory and some logic chips, and there could also be price increases.

Brian Matas, vice president of research at IC Insights in Scottsdale, Ariz., said it is too early to tell what the long-term impact of the quake will be on the supply chain.

Matas said while some fabs have been temporarily shut down, the good news is "most of the integrated circuit manufacturing is still in place." However, the bad news is that there are rolling power outages throughout the country and "that's never good for the IC industry." Are rolling blackouts going to continue for next several months or will power be restored? "That is unknown," Matas said. If rolling power outages continue, it will further disrupt chip production.

Matas added that in the short term, buyers can expect a short-term rise in spot prices for some parts. NAND memory "and microcontrollers may take a hit," Matas said. "I don't know if DRAM will be impacted because a lot of DRAM comes from outside of Japan." MCU, flash, and other chips prices may rise because of a potential rise in the cost of wafers.

While the overall IC industry is intact, some fabs have shut down. Two of the more notable fabs that stopped production are owned by Texas Instruments. TI's fab in Miho, about 40 miles northeast of Tokyo, suffered substantial damage to systems that deliver chemicals, gases, water, and some manufacturing equipment, although the actual building was not damaged, Texas Instruments reported. Chip work in progress was also damaged.

It will take weeks to make repairs and resume production. TI reported that it expects to have several lines running in May and full production will be restored in mid-July.

TI is moving quickly to shift production to other fabs and so far has identified alternate manufacturing sites for about 60 percent of Miho's wafer production.

The Miho fab accounted for about 10 percent of TI's output as measured by revenue in 2010. About a third of the output was digital light processing (DLP) products and the remainder of which was analog chips.

TI's fab in Aizu-wakamatsu, about 150 miles north of Tokyo, also was damaged in the earthquake, but equipment has already been re-started and full production should resume by mid-April. A third TI fab in Hiji, about 500 miles south of Tokyo, was undamaged and is currently running at normal capacity.

Production also stopped at eight of Renesas Electronics Corp's fabs in Japan because of damage caused by the quake. The chipmaker ceased production at its Tsugaru fabs, which makes analog and discrete devices, and at its Naka facility which builds system-on-chip and microcontroller devices. Renesas' Takasaki and Kofu fabs, which make analog and discrete parts, were also damaged. Some of the plants were restarted between March 19 and March 22, but had limited production capacity.

The earthquake has damaged about 40 percent of the total wafer capacity at Renesas, according to researcher IHS iSuppli

Elpida Memory Inc. said its semiconductor assembly facility in Akita shut down March 11 because of a power outage caused by the quake but production resumed March 16. There was no damage to the facility and no employees were injured, the company noted.

While some fabs and chip assembly facilities closed, so have factories that produce silicon wafers needed for chip production.

Wafer production has stopped at Shin-Etsu Chemical Co. Ltd.'s Shirakawa facility and at MEMC Electronic Materials Inc.'s Utsunomiya plant. Together, those two facilities account for 25 percent of the global supply of silicon wafers used to make semiconductors, according to IHS iSuppli. The shutdown of the two plants will impact the supply of memory and logic chips the most.

Shin-Etsu's Shirakawa facility produces 300mm wafers, are used in more advanced semiconductors. The wafers made at the facility are commonly used to make flash memory and DRAM. The facility supplies about 20 percent of global silicon wafer supply. The plant located in Nishigo Village, Fukushima Prefecture suffered damage to production facilities and equipment.

Shin-Etsu said it would set up production systems at other facilities. However, it is unclear how long it would take to restore the damaged facilities and equipment.

"If the shutdown doesn't last more than a month it probably won't be a big deal," said Takashi Ogawa, research vice president semiconductors technology service provider for Gartner Japan in Tokyo. Ogawa also added that the company probably has a month supply of inventory. "If the recovery is longer than a month, we will be concerned about some 300mm shortages. But it's too early to say if the shutdown will last longer than a month." Ogawa noted that other wafer companies will likely increase wafer production.

MEMC, based in St. Peters, Mo., said it evacuated employees and suspended operations at its Utsunomiya plant after the earthquake. The Utsunomiya facility accounts for 5 percent of worldwide semiconductor wafer supply. MEMC said it expects that shipments from the facility will be delayed in the near term.

It's not just silicon wafer and semiconductors that have been affected by the quake. Two companies that make copper clad laminate—used in production of printed circuit boards—have stopped production of the material. Mitsubishi Gas Chemical Company Inc. and Hitachi Kasei Polymer Co. Ltd. said they expect to resume production of copper-clad laminate within two weeks.

Other component production has been impacted as well as well. For instance, Stackpole Electronics makes resistors at a plant in Nagano. The facility is in the mountains far away from the coastline and was not damaged, but was shut down after the quake.

"The plant shut down so employees can be with their families and help with the relief efforts," said Kory Schroder, director of marketing for the company based in Raleigh, N.C. With the factory shut down "power that we would normally used to manufacture can be used for more important things," Schroder said.

Expect a slow recovery of electronics production in Japan

Limited production resumes at one TI fab in Japan