Dynasys Technologies Inc. has developed a wireless Data Collection Network to monitor current use by critical devices in the United States Air Force C130 Aircraft. The system will be part of the Aircraft Availability Improvement Program (AAIP). The goal of the program is to improve Aircraft Availability (AA) by reducing unscheduled maintenance, increasing reliability of systems, and eliminating obsolescence from systems used on aircraft and supporting equipment. The system will provide ON/OFF time and current use of critical equipment in the aircraft. This data will be used to determine actual MTBF in the field, and make decisions on maintenance reliability. In the near future, the network will also be able to solve problems in asset tracking and location, temperature logging and energy efficiency applications. The Network is composed of three major components, the Controllers, the Collectors, and End Devices.

The local network is designed based on Texas Instruments’ Simplicity Protocol stack. The protocol was modified to extend battery life, gain control of radio transmissions and improve on the Link layer. The units will only transmit if the Controller starts a session, and in their own time slot. For the hardware, we use TI’s MSP430, CC2520 Transceiver and other military rated components to meet full temperature specifications, making the product very unique in the Active RFID market.

The Controller polls the data collectors, updates required information to a central database and updates the End Devices. The End Devices are battery-powered RFID tags attached to the system that is being monitored. This allows the critical devices to be moved, uniquely identified and to carry their own usage data. Battery life for the End Devices will be over five years in extreme environments.

The Collectors are battery-powered units with eight Data Collection Channels. The present configuration uses Raztec’s unique current sensor, the RAZC-FLB-100. The sensor operates from a single 5 VDC source, operating temperature of -40 to 100 C°, frequency response of 50 KHz, a response time better than 100 µsec, 0.1 percent linearity and Transfer gain of 100 mv/A over a 20 Amp range. See Figures 1, 2, 3, 4 and 5. 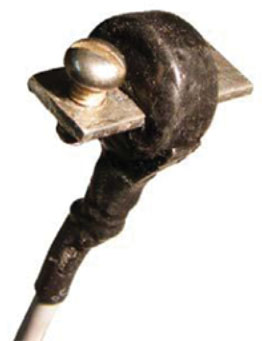 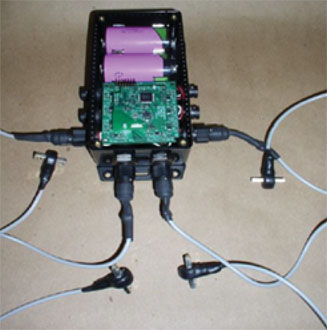 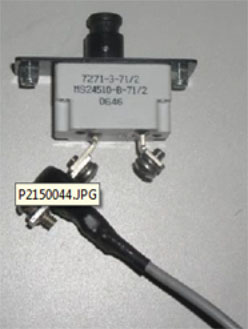 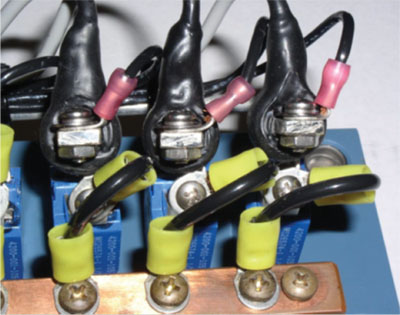 
The current sensor’s fast response time and special design allows us to collect data from all eight channels (AC or DC currents) in less than 4 msec, every minute for an average battery current use of less than 6 µAmps.

Data transfers from the Collectors and End Devices occur in less than 20 msec, average of 12 msec, and the Controller controls the rate of transfer. For example, updates could happen every minute, or every five minutes for large battery savings.

To separate the application from the network controller, we are using the RCM6700 Rabbit controller. It offers us various communication interfaces like RS-232, USB, Ethernet, I²C and plenty of RAM and Flash. For the data uploads, in the past we used the Iridium satellite modem for satellite communications, presently we are using a Quatech’s ABDG-SE-IN5410 WiFi radio for local area networking.