As consumers, companies, and even countries look for low-cost, energy-efficient lighting sources, light-emitting diodes (LEDs), and compact fluorescent lamps (CFLs) have become the leading alternatives. Both of these solutions are viable, yet differ greatly. CFL lighting devices are inexpensive but are slow to turn on, and exhibit poor dimming performance. On the other hand, LEDs have "snap-on" characteristics and dim well, but adoption has been slow due to cost.

Semiconductor manufacturers continue to create new LED driver components to decrease system complexity and cost. Meanwhile, LED manufacturers are pushing the efficacy (luminous efficiency) of high-brightness LEDs to reduce the number of LEDs required, as well as to reduce the power needed to regulate them.

One such innovation is the introduction of high-voltage, high-brightness (HVHB) LEDs. These LEDs require a much higher voltage to start current flow and, therefore, light emission. These new LEDs present new challenges and opportunities. While originally designed to be self-driven directly off of an AC line, factors such as low efficiency, low power factor, and the inability to dim limit the number of applications they can serve.

In Figure 1 we see the problems in driving these LEDs directly off of the AC line. In an effort to meet the entire voltage range (90 to 135 Vac or 207 to 253 Vac), the forward voltage drop (Vf) must be at the lowest AC voltage or lower. This means that when the voltage is at the upper limit of the scale, the voltage falls across the current-limiting resistor. This creates a loss and greatly reduces efficiency. This also creates heat, which may limit the life of the LED.

Now let's look at the turn-on time in Figure 1. Because the LED only conducts when the Vf has been met or exceeded, only the peak voltage is used to create light. Since it is such a small percentage of the overall AC period, power factor is very low (considerably below ratings called out in the US, Europe, and India, making them unusable in residential and commercial lighting in these countries). This means that power companies need to supply much more power than required for operation if they are to meet the peak power demands of these LEDs. Lastly, since the majority of dimmers (TRIAC or electronic) operate by chopping the AC waveform supplied to the lamp, dimming only occurs during the brief period the lamps are conducting. This means that for 90 percent or more of the dimming range, the light will be either all on or all off. 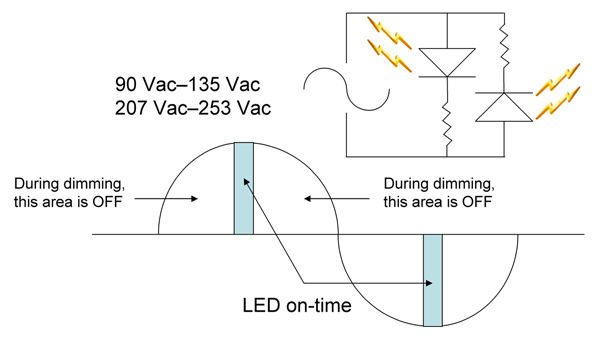 All that being said, HVHB LEDs have some advantages over their low-voltage siblings. From a driver standpoint, they lend themselves well to being driven directly from a boost power factor correction (PFC) supply (see Figure 2). This topology controls the power delivered to the load by matching the current consumption with the AC voltage waveform, thus ensuring a good power factor (typically 0.97 or better). With this form of PFC, it easily exceeds the regulatory agency requirement of 0.7 or 0.9, which is necessary for selling commercial and residential lighting in the US, Europe, and India. An added benefit to boosting the input voltage is the ability to create a voltage high enough so that, regardless of input voltage, one power supply design can be used. Thus, a universal input LED light (90 to 253 Vac) can be achieved. As always, there are trade-offs with a universal input. A design that meets both 120 Vac and 220 Vac applications gives the benefits of one product design, one build, and one stocking item. However, to make this possible, you must allow for the design to handle higher voltage than required for 110 Vac operation, and higher current than required for high-voltage applications. This equates to a higher overall bill of material (BOM) cost and larger components compared to an optimized solution for each voltage range.

High voltage also means low current for a given output power. For example, to create a 16 W LED light source (using four 4 W LEDs in series/parallel) with a total Vf of 380 Vdc, the required current is only 42 mA.

This low current means less storage capacitance, allowing the use of long-life, inexpensive ceramic capacitors. Using such capacitors increases the life of the overall light source, as it eliminates the need for electrolytic caps. Typical long-life electrolytics are rated at 20,000 hours, but this is dramatically reduced if they are overheated, versus LEDs that have a life as long as 50,000 hours. This is a significant achievement in applications such as street lighting, high bay lighting, and other applications high ambient-temperature applications.

From an efficiency aspect, the main loss elements in a switch mode LED driver are the LEDs themselves: switching power supply (IC), drive FET, and rectifier. Keeping the switching frequency at a reasonable frequency (150 kHz, for example) minimizes switching losses in the FET, and the low current means low power loss in the rectifier. Efficiencies of greater than 90 percent can be expected and will only vary slightly over the entire VIN range.

Power factor correction can be achieved in several ways:

Valley-fill operation limits driver life by requiring low-life electrolytics. Flyback operation requires the expense of a transformer, as well as creating much electromagnetic interference (EMI) radiation (through the flux loss of the transformer), and conduction (through the high voltage and current spikes caused by discontinuous operation, as well as the reflected voltage, equal to VIN + VOUT).

Using this same technique for driving low-voltage LEDs means that first you must boost the input voltage for the PFC, and then buck the voltage down to the Vf drop of the LED string. This adds complexity and cost to the driver, often adding entire power stages to convert the high PFC voltage to LED current. A more common method of driving low-voltage LEDs is to use a power supply in a flyback topology running in a discontinuous mode (see Figure 3). The transformer's turn ratio helps bridge the differential in voltage between VIN and Vf. The drawbacks of this topology are complexity (and by association, higher cost), inability to accept a universal AC input, increased EMI conduction, and radiation (caused by reflected voltage and flux loss of the transformer). Also, it is much more difficult to design without bulk capacitors. High-voltage bulk capacitors are generally electrolytic and have a limited lifetime, especially in hot environments. Additionally, lower voltages create higher currents, increasing the temperature and size of power path components, as well as limiting the output of the chosen LEDs.

One important attribute of LED lighting is the ability to dim using existing dimming solutions (predominantly TRIAC-based). This ability to dim over the entire range of the TRIAC span is what separates a properly driven LED and a poorly or self-driven LED, as well as the CFL option. Care must be taken to avoid flicker (TRIAC misfiring) and to provide enough of a load at light dim to keep the dimmer in a conductive mode. Filtering the AC line is essential to reduce the 60 Hz waveform from affecting the drive voltage at the LEDs, as well as limiting the conductive EMI propagating back onto the input waveform (thus violating FCC specification).

Dimming is achieved by "decoding" the AC signature during TRIAC dimming and converting the result into either a voltage or current equivalent. This can then be inserted into the power supply directly, or converted into a pulse width modulated (PWM) signal to adjust the LED "on" time in accordance with the dim percentage.

There are trade-offs to be made when dimming. An analog voltage or current injected in the feedback path of the driver is the most inexpensive method and requires minimum additional circuitry. However, it has several drawbacks. Loop stability may be compromised in a PWM SMPS, and oscillations or ringing can occur during voltage transients. This may show up as flickering in the LED's light output. The other drawback is that analog dimming reduces the current through the LED and causes a change in color over the dimming range. For example, a blue-white LED at full current may appear more yellow-white at low currents.

With digital dimming (e.g., PWM), either the LED strings are turned on and off by shorting them with a parallel FET, or disconnected from ground by paralleling a FET with the current sense resistor. In this manner, the current stays constant through the LEDs, but they appear dimmer due to being lit for a portion of the time. The advantage is that the color will not vary through the dimming range.

LEDs such as the Everlight HiVo series have Vf ranges to accommodate 110 Vac and 220 Vac voltages. Using two of the 220 Vac in series ensures that all input voltages (90 to 277 Vac) can be accommodated with the active PFC boost design. Connecting them in either series or parallel provides the flexibility to cover many power and voltage configurations.

In conclusion, HVHB LEDs, when driven in a PFC boost configuration, have the advantages of small size, high PFC, high efficiency, low cost, and low complexity. All of this enables a very competitive and compelling solution to the CFL lighting solutions available on the market today.

For more information about LED solutions from TI, visit: www.ti.com/led-ca.