The advantages of LEDs for automotive applications have not been missed by the car makers. Long life, high brightness, low voltage, and cool running are the attributes that appeal to the manufacturer's eye for an easy-to-install solution.


The advantages of LEDs for automotive applications have not been missed by the car makers. Long life, high brightness, low voltage, and cool running are the attributes that appeal to the manufacturer’s eye for an easy-to-install solution. It is little surprise then, that LEDs have made their way into the vehicle’s cabin, behind the dashboard, and into the rear light clusters.

This article discusses the benefits of LEDs for current automotive applications, takes a look at what is next - such as using LEDs to displace conventional main beam headlight bulbs - and then considers the types of power supplies that are needed to support these uses.

The LED automotive lighting market is significant and growing. According to a recent report from analysts McKinsey & Company,¹ the 2010 market size was estimated at EUR13 billion ($17.2 billion), representing approximately 20 percent of the total lighting market. This is expected to climb to EUR18 billion ($23.8 billion) by 2020 (Figure 1). 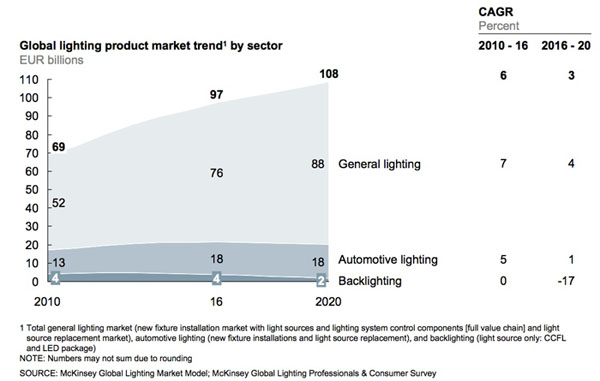 Figure 1: Growth in LED automotive lighting as a part of the overall LED lighting market (Courtesy of McKinsey & Company).

This rapid growth belies a relatively mature industry. LEDs were first used in the center high-mounted stop lamp of the 1984 Corvette sports car. LEDs have been in use in mainstream production vehicles since the mid 1990s in applications such as backlighting for instrument clusters, climate- and audio-control switches, and interior lighting.

However, the real catalyst for growth came with the use of LEDs for exterior lighting applications. In 2000, the first such use was recorded with the release of the Cadillac Deville that featured an entire rear cluster of stop lamps powered by solid state lights.

More recently, LEDs have started to appear in headlights. It has taken some time for the devices to make it from the rear to the front of the vehicle because, being closer to the heat and vibration of the engine, the headlight operates in a much harsher environment than other running lights. In addition, headlights are governed by complex regulations because they are such a major safety feature. Figure 2 shows a headlight cluster from a German Audi Q5 sports utility vehicle (SUV). 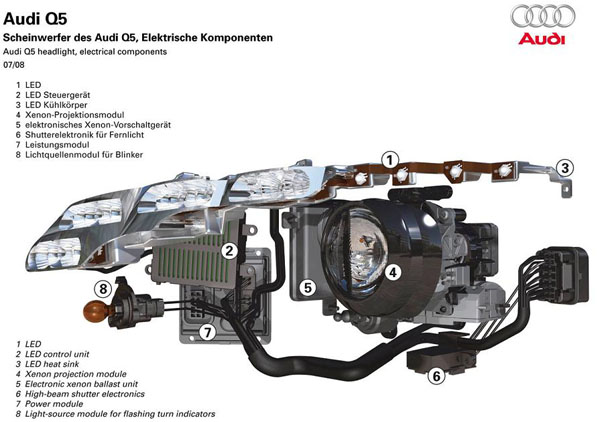 Audi was the first to introduce a full LED headlight on its flagship model, the R8. Japanese premium automotive brand Lexus has followed with an LED low-beam arrangement on its LS600h (its high beam uses conventional halogen lamps).

Today, according to the McKinsey & Co. report, more than 90 percent of LED automotive lighting is related to exterior lighting.

Car makers do not select components on a whim. Selections depend on reliability, ease of assembly, longevity, and competitive price. LEDs meet these criteria, but also offer other key advantages that make them a good fit for automotive applications. These advantages include: The designer’s challenge

While fitting LEDs to cars has many advantages, the design engineer faces a different set of problems integrating the units compared with traditional incandescent bulbs. Conventional bulbs can be supplied directly from the car’s electrical system, whereas LEDs have different power requirements that demand the use of purpose-designed power supplies.

High-brightness LEDs should be driven at a constant current irrespective of supply voltage fluctuations. LED color and brightness are very sensitive to changes in current and an excess increases the device’s junction temperature, shortening its lifetime.

There are a range of LED drivers available to engineers looking to replace conventional bulbs with LEDs in automotive applications. But the choice of driver will vary according to the end use. Interior lighting, for example, is best served by linear LED drivers because the chips are relatively inexpensive, and easy to use. Linear LED drivers such as ON Semiconductor’s NCV7680 and Texas Instruments’ TL4242 behave like a constant current source that is immune to voltage fluctuations.

The downsides of a linear driver are high power dissipation (equal to LED current multiplied by the voltage drop across the internal serial pass device) and an input voltage that can only be stepped down. Power dissipation generates heat that can raise the LED’s junction temperature and can compromise longevity. Some drivers will include a function to mitigate the problem by measuring the input voltage, and, if it exceeds a pre-programmed level, reduces the current to decrease power dissipation.

Exterior lighting, such as rear light clusters, is typically brighter than interior lighting and, hence, needs more power. A linear driver is not the best option because of its high power dissipation; instead, a switching driver is a better choice because it is more efficient and, hence, runs cooler at higher power levels.

LED headlights bring their own unique challenges. The input voltage can vary from 5.5 V during cold cranking up to 24 V for a double-battery system. The system may have to withstand voltage spikes up to 40 V². Because of this variation, and the need for high current yet low power dissipation, LED drivers for headlight applications demand efficient (for example, switching), step down (buck), step up (boost) topologies.

Highly integrated LED drivers, such as Maxim’s MAX16812, meet these requirements but also keep the external component count low and cost down. The chip features an internal dimming MOSFET to help system reliability by automatically switching off power to the LED string during load dumps.

Heads up on head up displays

The latest innovation now being introduced into luxury vehicles is a head up display (Figure 3). 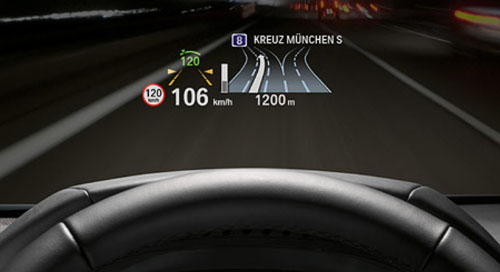 For this new feature - and other luxury additions such as LCD backlighting - the input voltage will always be lower than the total voltage across the LED string, dictating the use of an LED driver in a boost configuration.

Moreover, head up displays require a 3000:1 dimming range to cater for the wide range of ambient light conditions encountered inside vehicles. Suitable LED drivers feature an additional dimming MOSFET driver to turn the LEDs on or off in a very short time. The dimming MOSFET also protects the LEDs during any load dumps. 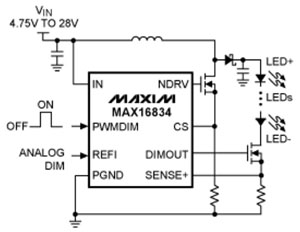 High brightness LEDs are well-established alternatives to conventional bulbs in automotive applications. Dashboard backlighting, interior lighting, and rear light clusters are popular uses because they play to the LED’s strengths such as robustness, longevity, and fast operation.

More recently, the solid-state lights have started to push incandescent bulbs out of more demanding applications such as headlights and head up displays.

To maximize the advantages of LEDs used in vehicles, designers need to select the optimum constant current power supply for the application. Linear LED drivers are a good choice for low cost, relatively low power use, while more efficient switching LED drivers work well when power dissipation needs to be kept down. The choice of buck, boost, or buck-boost topology is also important, particularly if the LED driver is likely to be subject to a wide variation in input voltage.