Driving a Health Meter on a Chip

Microcontrollers and other components from TI, Freescale, and Analog Devices contribute to the miniaturization of health monitors and other medical devices.

A key driver for wearable sensors is health monitoring, and miniaturization has been a key enabler of this technology. Being able to integrate multiple sensors and the data acquisition subsystems on the same device as the microcontroller is giving designers the ability to miniaturize the design of their equipment to fit into more form-factors.

The latest wearable health monitor from PulseOn, for example, uses a customized micromachined MEMS sensor from STMicroelectronics along with its STM32L microcontroller. This provides accurate continuous heart-rate measurement and the algorithms running on the microcontroller turn the data into meaningful personalized feedback for each individual.

The MEMS accelerometer maintains the heart-rate measurement accuracy and reliability at the level delivered by an electrocardiogram and has been tested in a wide range of conditions, from physical inactivity up to high levels of cardio-intensive activities. The accelerometer does this by tracking hand motion and vibration in the system to eliminate the noise in optical blood-flow detection so that the system can distinguish between the signal that represents the actual heart pulse and which is just noise caused by hand movements. The accelerometer also determines the wearer’s level of physical activity. 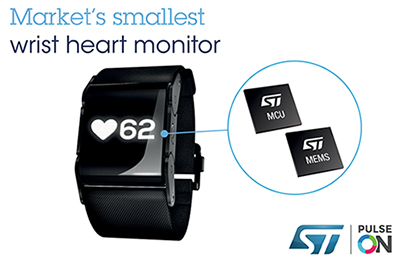 “The precision and performance of the chips has enabled us to apply the strictest scientific standards to the PulseOn heart-rate measurement technology, producing reliable results that includes the beat-to-beat accuracy during rest,” said Jari Nousiainen, Head of Engineering at PulseOn. “Equally important, the minuscule dimensions and energy budget of the devices have been a competitive advantage by contributing to the creation of the market’s smallest and most accurate wrist-worn heart-rate monitor.”

Another way to miniaturize the health monitor is to integrate as much of the data capture on one chip. The ADuCM350 from Analog Devices is a high precision meter-on-a-chip that is designed to run from a coin cell in portable device applications such as point-of-care diagnostics and wearable devices. By combining the amperometric, voltametric, and impedometric measurement capabilities in the analog front-end with a flexible switch matrix, a wide range of sensors can be used in the minimum footprint to reduce the overall size of the system. This uses a 16-bit, precision, 160 kSPS analog-to-digital converter (ADC); 0.17% precision voltage reference; 12-bit, no missing codes digital-to-analog converter (DAC); and the reconfigurable ultralow leakage switch matrix. There is also a temperature sensor with an accuracy of ±1°C from 0°C to 50°C.

The chip also includes a low-power ARM Cortex-M3-based processor, 384 kB of embedded flash memory, 32 kB of system SRAM and 16 kB of flash-configured EEPROM, as well as I/O to support portable meters with display, USB communication, and active sensors. The AFE is connected to the ARM Cortex-M3 via a high-performance bus (AHB) slave interface, as well as direct memory access (DMA) and interrupt connections. 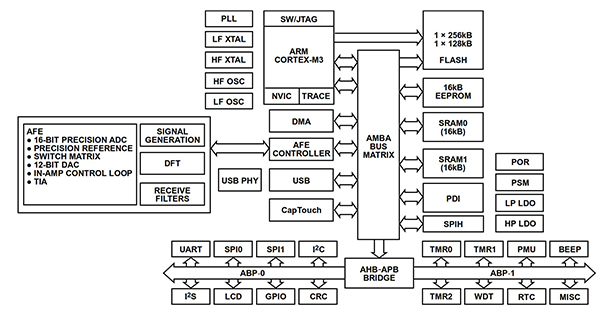 Figure 2: The ADuCM350 integrates all the elements needed for a health monitor onto a single chip in chip-scale packaging.

To keep the size of the system down, all this is packaged in a 120-lead, 8 mm × 8 mm chip-scale ball grid array (CSP_BGA) that operates from -40°C to +85°C to meet the needs of many different environments.

Power, of course, is a vital consideration in miniaturization of the system, as lower power allows for smaller batteries.  As a result, the ADuCM350 has a range of power modes such as dynamic and software-controlled clock and power gating.

Freescale Semiconductor's MK50DX256CLK10 similarly is aimed at miniaturized sensor applications, with a wide range of integrated peripherals. These include two 16-bit successive approximation SAR ADCs, a programmable gain amplifier (PGA) (up to x64) integrated in each ADC, as well as two operational amplifiers and two transimpedance amplifiers. For data output, there are two 12-bit DACs, with three analog comparators (CMP) containing a 6-bit DAC and programmable reference input and a voltage reference, all allowing the system to be more highly integrated.

Communication interfaces include a USB full-/low-speed On-the-Go controller with on-chip transceiver, two SPI modules and two I2C modules for linking to digital sensors in the system, as well as four UART modules to link to other serial sensors. There is also an I2S module to link to other controllers in the system and a low-power hardware touch sensor interface (TSI) for display management.

All of this is controlled by an ARM Cortex-M4 core with DSP instructions, delivering 1.25 Dhrystone MIPS per MHz and running at up to 100 MHz to minimize the power consumption. Memory support includes up to 512 KB of program flash memory, 56 KB FlexNVM of non-volatile memory and up to 128 KB of RAM. A 16-channel DMA controller supports up to sixty-three request sources and allows data to be captured from sensors and stored without having to wake up the microcontroller core, reducing the overall power consumption and helping to reduce the size of the design. 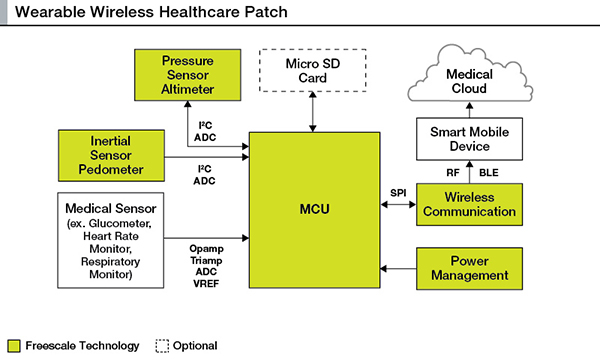 Figure 3: Freescale's MK50DX256CLK10 is used in a heart rate measuring patch by integrating the data capture functions from simple electrodes.

The MK50DX256CLK10 can be used for applications such as a wearable heart-monitoring patch, where the signals from the electrodes are boosted by the operational amplifier and converted to a digital signal by the SAR ADCs to a resolution of 12 bits. The M4 core can then process the signals or send them to a wireless transceiver that links to a base unit. All of this can be integrated into a simple adhesive patch with a flexible lithium ion battery that sits comfortably on a patient's chest to monitor activity without complex chest straps and lots of different wires. This level of miniaturization increases the efficiency of operations in hospitals and makes life more comfortable for the patient.

However, it is not just 32-bit controllers that can be used to miniaturize sensor systems that are monitoring health. The MSP430 16-bit family from Texas Instruments has focused on low power and integration to provide a platform for sensor systems. Applications such as glucose meters for monitoring diabetes and heart rate monitors are targeted by the MSP430 family, making use of the on-chip data converters. The MSP430AFE2x3 is an ultra-low-power mixed-signal microcontroller that integrates three independent 24-bit sigma-delta ADCs, one 16-bit timer, one 16-bit hardware multiplier, USART communication interface, watchdog timer, and eleven I/O pins.

Again, ultra-low power is a key consideration for minimizing the size of the design, and the architecture has five low-power modes so that it can be optimized for extended battery life in portable measurement applications. The device features a 16-bit RISC CPU with 16-bit registers and constant generators that contribute to maximum code efficiency, and so allow for a smaller, more power efficient design. A digitally-controlled oscillator (DCO) allows wake-up from low-power modes to active mode in less than 1 µs. 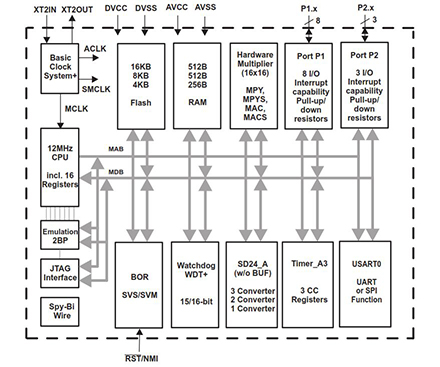 The advanced integration of modern microcontrollers is contributing dramatically to the miniaturization of health monitors, approaching the point where the vast majority of the functionality is combined on a single chip. System developers will always want separate sensors in order to differentiate their designs, but miniaturizing the data capture and analog front-end of the system design is allowing more health monitoring functions to be included in ever smaller form-factors. The ability to manage the power consumption carefully also allows for a sufficient battery life but also means that a smaller battery can be used to further reduce the size of the system.

Having data acquisition peripherals on a flexible bus also helps reduce the system size, as multiple sensors can be linked to the same data converters. As long as the functionality is orthogonal and the sensors will not be used at the same time, the flexibility allows for a smaller pinout and therefore, a smaller footprint.

However, the example of PulseOn shows that increasingly sensors are being used together – the MEMS accelerometer is used at the same time as the optical blood flow sensor to improve the quality of the end data. This presents more challenges for the designer who is aiming to reduce the layout to the smallest possible system size but provides opportunities for both shrinking the size of a health monitor and improving the quality of the information.