Halogen and incandescent lamps, although popular, present some key concerns in today’s power conscious, green world. The lamps consume a lot of power and typically burn out after a few thousand hours of use. 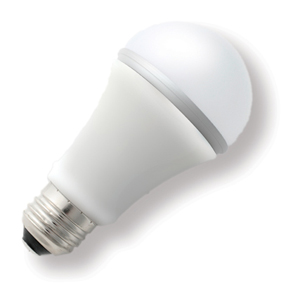 Halogen and incandescent lamps, although popular, present some key concerns in today’s power conscious, green world. The lamps consume a lot of power and typically burn out after a few thousand hours of use. The latest high-brightness LEDs (HBLEDs) offer a great alternative — they use a lot less power and can last about ten times as long. However, designing HBLED replacements for popular halogen and incandescent lamps such as the MR16, PAR20, A19 (Figure 1), and others present three key design challenges:
While previous generation LED drivers could implement retrofit LED lamps that meet the first challenge, most of the drivers do not have the circuitry to meet the third challenge when cut-angle (triac or trailing edge) dimmers are present and can have problems keeping long lifetimes at high operating temperatures due to the lifetime limitations of electrolytic capacitors. However, the latest generation drivers, such as Maxim’s MAX16834 solution, incorporate additional circuitry to handle dimming functions and provide work alike functionality to halogen and incandescent lamps while delivering what is probably the most important advantage of LED technology today — lamps with very long lifetimes and as a consequence, low lamp replacement costs.

Fitting in the existing form factor

The existing form factor imposes both a physical limitation (i.e., the driver board has to be small enough) and a thermal limitation on a retrofit lamp. While both of these limitations are particularly challenging for MR16 and GU10 form factors, they pose a challenge for the design of other replacement lamps (including PAR, R, and A19 form factors) as well.

While size is important for a retrofit, thermal limitation is often more critical. LEDs emit only visible light; they do not radiate energy at infrared wavelengths like other technologies. Thus, while LEDs are more energy efficient than incandescent and halogen lamps, they dissipate much more heat through thermal conduction in the lamps.

Thermal dissipation is also the main limiting factor for the amount of light that a lamp can produce. Today’s LED technology in retrofit lamps can just achieve a level of brightness that is acceptable for the mainstream market. Pushing the limits of brightness and, consequently, thermal design is essential for designing a commercially successful product.

The graph in Figure 2 shows an example of LED lamp lifetime degradation (B50/L70 lifetime, i.e. when 50 percent of the LEDs have lost at least 30 percent of their brightness) as a function of lamp’s internal operating temperature. As you can see, at about 80°C, lifetimes shorten for lamps that use electrolytic capacitors versus lamps that do not use the electrolytics, because the lifetimes of the driver board start becoming the limiting factor. At 100°C, lifetimes with electrolytic capacitors are much shorter. As previously mentioned, internal operating temperatures of 80°C to 100°C are common for LED retrofit lamps. 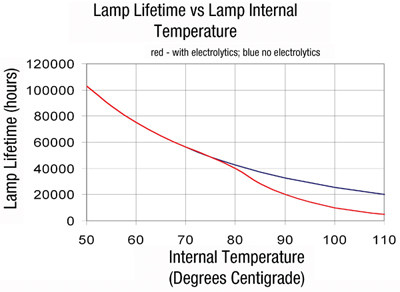 Figure 2: As the internal temperature of a lamp increases, its operating lifetime decreases. Lamps that employ electrolytic capacitors in their driver boards (red line) have shorter lifetimes than lamps that do not have electrolytics (blue line).

A long lifetime is a major selling point for an LED lamp and probably the main reason why businesses are switching to LED lighting today — a long lifetime means much lower lamp replacement cost, which can more than offset the considerably higher sticker price of an LED lamp. For this reason, lamp makers need to provide more than 10,000 hours lifetime if they want to make a successful product.

Retrofit LED lamps must work correctly in infrastructures than include cut-angle (triac or trailing-edge) dimmers and electronic transformers.

A triac (i.e. cut-angle) dimmer reduces the amount of light produced by a lamp connected as its load by keeping the lamp for the initial part of each AC supply voltage cycle. The dimmer is off for an amount of time, which is adjustable, and then turns on and latches on for the rest of the half cycle. The effect is that the voltage applied to the lamp looks like the waveform in Figure 3. 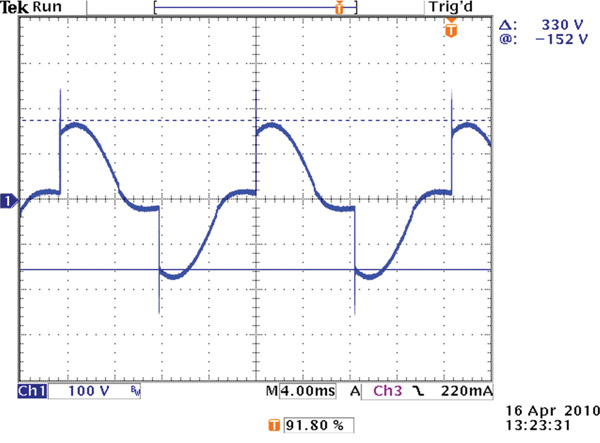 Triac dimmers are designed to work with incandescent and halogen lamps, which are purely resistive loads. In fact, they have some requirements for their load currents that are fulfilled by resistive loads:
LED lamps that are not designed to be dimmable do not work well with triac dimmers. Their internal driver circuits typically include rectifiers and buck or flyback converters. The input current of such a driver consists of short, high spikes at each half cycle of the input voltage. Such an input current is not compatible with the conditions listed above, and, in fact, such lamps do not dim, flicker, or turn on at all when used with triac dimmers.

The electrical infrastructure is even more complicated for a 12 VAC input lamp because an electronic transformer and dimmer can be connected at the lamp’s input.

While, for the remainder of this article, we will focus in particular on a design for offline 12 VAC lamps, the same considerations apply to 230 VAC input lamps.

As described above, the dimmability of an LED lamp and compatibility with and an electronic transformer has a lot to do with shaping the input current of the lamp appropriately.

Another choice that the designer faces is between a fixed frequency switching regulator topology and a variable frequency type (e.g. transition mode) and also between continuous conduction mode and discontinuous or transition mode.

Regarding the first matter, fixed frequency generally has an advantage for the management of EMI issues. With a fixed frequency solution, the designer must only filter EMI noise at that particular frequency, while with a variable frequency design (e.g. a transition mode design), the switching frequency varies along the cycle of the input voltage, so it causes noise over a wide frequency range, which can be more difficult to filter.

The solution in Figure 4 uses a single stage conversion, which minimizes size and cost, to drive LEDs in replacement lamp. It uses active PFC and works at a fixed frequency in continuous conduction mode using a patent-pending technique.

In this solution, the input current is shaped as a square wave at the same frequency as the input voltage to maximize its value over the whole cycle of the AC voltage in order to fulfill the requirements of triac dimmers. It uses a fully released product from Maxim, the MAX16834. The square input current is obtained by controlling its average value and keeping it constant throughout the cycle of the rectified input voltage. Resistor R1 senses the MOSFET current, which is basically the same as the input current, and components R2 and C2 extract the average of this value and feed this information to the MAX16834, which keeps it constant with its control loop.

As mentioned before, an LED driver compatible with triac dimmers needs to behave like a resistive load for the dimmer during the off part of the input voltage cycle. In this design, components R3, Q1, and “Startup Current Control” block performs this function by providing an input resistance whenever the input current of the driver falls below a certain level.

Inductor L1 and capacitor C1, which is a small value ceramic capacitor, make a filter for EMC purposes.

This design uses a non-isolated buck topology composed of inductor L2, diode D1, and MOSFET Q2. It is possible to design a similar solution that uses a flyback isolated topology. Thus, this solution works regardless of if the safety isolation of the LED lamp from the input voltage is done in the driver or in the enclosure of the lamp.

Performance of this solution

The circuit in the schematic (Figure 4) has been tested on a demo board with a 120 VAC/60 Hz input and eight LEDs at the output with a total output power of 10.1 watts. It has been tested to work with a wide range of triac dimmers, including those listed below:

The observed efficiency is 85 percent, and the input power factor is 0.95.

Designing LED retrofit lamps is a big challenge. They have to fit into the physical and electrical infrastructure that was made for incandescent and halogen lamps that have very different requirements and limitations. This creates heat dissipation, lifetime limitation, and dimmability issues for the LED lamp maker.

At present, numerous solutions are being proposed to try to overcome dimmability limitations using different topologies and power factor correction techniques. In this article, we discussed the advantages of using an active PFC solution, which provides excellent dimmability with no flicker of the lamp while providing a more than good enough power factor. We have provided an example of such a solution using Maxim’s MAX16834 IC. This is a solution that is available for use in mass production today, and that, in addition to the dimmability, provides the advantage of giving the designer the option to avoid electrolytic capacitors, thus solving the driver lifetime issue mentioned previously in the article.