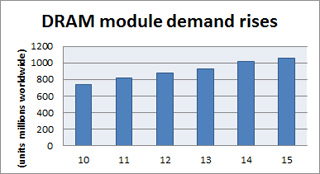 Strong PC shipments and an increase in memory content in PCs will drive module growth in 2011.Global DRAM module shipments will increase 11 percent to 812.8 million units in 2011, as the average amount of DRAM in a PC grows by 30 percent, according to market researcher IHS iSuppli.

DRAM module growth in 2011 will be down slightly from the 14.6 percent expansion last year, but will remain healthy for the next four years. Clifford Leimbach, an analyst for memory demand forecasting at IHS iSuppli, said one reason for strong DRAM module growth is that consumers are replacing old PCs with new computers equipped with more memory.

The remaining 18 percent of the DRAM module market in 2011 will be upgrade modules, sold by third-party suppliers into the retail channel.

Double data rate 3 (DDR3) remains the dominant technology for modules replacing DDR2, said Leimbach. DDR2 modules were the main computer memory from 2006 to 2009. DDR3 will remain the dominant memory technology for computers for the next four years, according to IHS iSuppli.