Some suppliers are using DNA marking to guarantee the authenticity of chips. 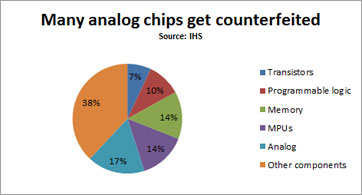 Analog chips, microprocessors and memory ICs are targeted the most by counterfeiters.Electronics purchasers are often told that sourcing parts from component manufacturers or their authorized distributors is the best way to stop the spread of counterfeit parts in the electronics supply chain. However, some distributors and chipmakers are turning to science to thwart the proliferation of bogus parts. They are using DNA to mark parts to assure authenticity.

Many buyers purchase components from independent distributors when parts are in short supply, which is when counterfeiters boost supply of bogus parts.

“Counterfeit suppliers introduce a greater number of counterfeit products to the market in concert with manufacturers responding to increased forecast or demand. As the market picks up, counterfeit incidents increase,” he notes.

Jaknunas adds that counterfeiting incidents also rise when a chipmaker announces it will no longer build a certain part.

While purchasing parts from authorized sources can reduce the risk that a buyer will get stuck with a counterfeit part, it is no guarantee. There have been cases where authorized distributors unwittingly sold bogus parts to customers.

The counterfeit part may have gotten into a distributor’s inventory because the fake part was included in a batch of returns from a customer, who may have bought the same part number from several authorized and independent distributors. 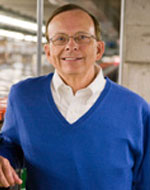 He also says bogus parts find their way into the supply chain from independent distributors.

“You might be able to test it for certain functionality, but in some cases the real test would require destruction of the part,” he says. “The only way to be sure that you don't have a counterfeit product is to buy from an authorized distributor.”

Some distributors—authorized and independent—and some semiconductor manufacturers are using a new DNA marking technology to guarantee the source and authenticity of parts.

DNA marking technology was developed by Applied DNA Sciences, a biotech company based in Stony Brook, N.Y. With the technology, plant-derived genomes are used to mark components when they are manufactured or later when they are sold. The DNA used is a mark of origin indicating the source of the part.

James Hayward, CEO of Applied DNA Sciences, says a part can be marked by putting the DNA in the ink used to label the chip. He explains that his company’s SigNature DNA markers are easily detected. Only a single molecule of the DNA is needed for detection, so only a tiny amount of DNA has to be applied to the component. 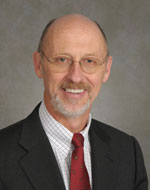 “All customers have their own unique DNA sequence, which they apply to their products,” says James Hayward, CEO of Applied DNA Sciences.“We have a mark of authenticity that a manufacturer can apply to the part as part of the manufacturing process or post production process,” she says, adding that it assures the origin of the part. A distributor, on the other hand, would use a “provenance mark,” which assures the identity of the immediate supplier, such as a distributor. The mark is used for traceability and provides supply chain accountability.

Hayward says the two marks are distinct in several ways.

“All customers have their own unique DNA sequence, which they apply to their products. But the DNA of a provenance mark is different in composition than the DNA of the mark of authenticity,” he says.

The DNA can be detected with a “rapid screening method” that uses an inexpensive handheld device to screen chips and verify that they have been DNA marked, adds Hayward. However, for "forensic quality" verification, a laboratory test needs to be conducted. With the test, a part is swabbed and then sent to a laboratory for analysis.

Hayward says the technology is highly reliable—the error frequency is one in hundreds of trillions.

The SigNature DNA markers are required for electronic circuits purchased by the U.S. Defense Logistics Agency (DLA). The agency announced it would subsidize the cost of DNA technology for its trusted suppliers. Forty-two companies have signed on or are in serious negotiations for use of SigNature DNA on DLA-bound electronic parts, according to Applied DNA. Many have said they intend to authentication-mark their products more widely than DLA, including to commercial customers.