The merger of the small- and medium-size display business should also result in more display innovation.

The merger of the small- and medium-size liquid crystal display (SMD-LCD) businesses of Sony, Toshiba, and Hitachi should result in more LCD capacity and greater technological innovation, according to analysts and company executives.

The three companies announced that they will integrate their small- and medium-sized LCD businesses to form a new company called Japan Display. Innovation Corporation of Japan, a public-private investment firm, will own 70 percent of the new company, while Sony, Toshiba, and Hitachi will each have a 10 percent share.

Japan Display will use the value-added technologies of the three display manufacturers to establish new production lines and meet the market demand for small and medium-size LCDs. The market for small and medium- size LCDs, which measure less than 10 inches diagonally, will grow from $32.2 billion in 2010 to $37.8 billion in 2013, according to researcher IHS iSuppli.

These displays are used in a variety of equipment, including digital cameras and smart phones.

The new company will also invest in advanced research and development, focusing on the advancement of next-generation technologies such as higher resolution and thinner organic light-emitting diodes (OLEDs).

Kimikazu Noumi, CEO of Innovation Corporation of Japan, said the new company will become a leading small- and medium-sized display manufacturer, and by “pooling compelling technological know-how, will be positioned to win in a competitive and lucrative global growth market.”

Howard Stringer, chairman, CEO and president of Sony Corporation, added that Japan Display will become a “driving force for technological innovation and new growth in the small- and medium- sized display market.”

While LCD buyers at OEMs may not like the idea of the consolidation because it reduces the number of suppliers, the deal will be good for buyers in the long run, said Vinita Jakhanwal, director for small and medium displays at researcher IHS iSuppli, headquartered in El Segundo, Calif. She noted that the three companies have struggled in recent years.

“If you have three suppliers whose financial existence is determined every quarter and they don't know if they're going to exist in the market by themselves in the next year, that is a cause of concern for buyers,” said Jakhanwal. “Together they are financially stable.” 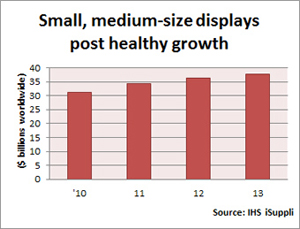 Driven by a smart phones and digital cameras, the small medium-size display market will grow to more than $37.8 billion in 2013.Each of the companies have struggled recently facing stiff competition from Samsung and others in the SMD-LCD market. Sony and Hitachi have been losing money with their small and medium-sized display business. Toshiba's business has also struggled, but was profitable last year.

The three companies have struggled individually, resulting in a lack of funding for research and development and capital expenditures.

“Given the fact that the new company has government backing and investment, the lack of capital expenditures that was felt by these three companies individually will probably go away and will see further expansion and capacity investment,” said Jakhanwal.

That capacity will be needed because of robust demand for small and medium size LCDs.

Jakhanwal went on to say that “The boom in current demand for LCDs from smartphones and tablets will require more higher-end LCDs, which the Japanese suppliers are very capable of manufacturing so they will get economies of scale and more capacity to manufacture these LCDs.”

She added that the deal will be positive for the LCD industry.

“The merger will help make competition more on technology and on capacity rather than on price, which is going to be good for the LCD industry,” said Jakhanwal. “It is going to be a move in the right direction.”