There is increasing momentum, inevitably driven as much by fiscal issues as conservation, behind developing alternative and renewable sources to replace or complement conventional energy generation.


There is increasing momentum, inevitably driven as much by fiscal issues as conservation, behind developing alternative and renewable sources to replace or complement conventional energy generation. Few like to see more power plants being built or earth’s finite natural resources being used, just to generate ever more energy, but in order to maintain affordable power, that is what our modern society demands.

With this momentum comes a raised awareness among decision makers about how the energy they consume in order to light our streets, manufacture goods and heat our homes, can best be used. Similarly, there is increased obligation on energy providers to help those decision makers, by improving not only the efficiency with which energy is generated, but also how it is distributed, consumed and accounted for; all of which is happening in an economic environment that demands lower unit cost. It is this ‘dynamic’ that is creating a real need for what has become known as Smart Energy.

Ever since the development of alternating current made the distribution of electricity over great distances a reality, is has been used to bring light into our lives. As one of the oldest sectors, lighting technology still leads the way; the lighting industry is in a constant state of transition towards more efficient solutions.

This is borne out by history; the eventual triumph of fluorescent lights over incandescent required an element of control in the form of the ballast, which, incidentally, helped lead to the development of the more efficient high frequency tube and the introduction of digital ballasts. Today the industry is transitioning towards the adoption of LED lighting, which offers more energy efficiency and increased potential for the control of light installations, such as adjusting color hue. In industrial applications, high frequency fluorescent lighting may still dominate today due to its relatively low cost and high output efficiency, but the development of high brightness LED solutions will inevitably breach this domain also.

Arguably, the introduction of the digital ballast marked a vital change for the lighting industry. It provided an opportunity – coupled with the use of higher frequencies – to more accurately control the light output of a fitting. This control naturally fell within the remit of the microcontroller invariably used at the heart of digital ballasts. Today, there are numerous examples of microcontrollers suitable for this application, supported by an increasing ecosystem of development kits and software. Digital ballasts are now the key to all modern lighting solutions; high frequency fluorescent and high brightness LED.

A control structure provides the ability to implement distributed systems and, again, the digital ballast enabled by an embedded microcontroller provides the perfect platform. It is necessary to coordinate distributed control, and the lighting industry has, to some extent, standardized two protocols; DMX512 (which stands for Digital Multiplex with up to 512 packets or ‘slices’ of data) and DALI (Digitally Addressable Lighting Interface).

DMX512 was developed by the theatrical industry, but has since been adopted across other industries, to provide control over dimmable ballasts in various environments. It is an asynchronous bus based on a differential pair using signal levels comparable to RS-485, with a variable-length data stream. Its topology allows slaves to be daisy-chained; however, as it is unidirectional, it is limited to one controller per string – or ‘universe’ – of slaves.

Implementing a DMX512 communications ‘universe’ is relatively simple in even modest 8 bit microcontrollers. In devices with a UART module, only an external RS-485 compatible transceiver is required, as shown in Figure 1, which depicts a typical implementation. Each slave connected to a universe can be assigned one of the 512 possible channels. In operation, the controller repeatedly transmits data (at least once per second), overcoming the protocol’s lack of a formal handshaking feature. The most critical element of the protocol is the pulse timing, which resembles a pulse-width modulation topology where the start and stop markers for each frame must meet specific timing requirements. These are known as the mark before break, or MBB, the mark after break (MAB), and the break itself. The data frames can be an arbitrary length, so it is critical that the microcontroller is able to identify the MBB and MAB markers.


The data frame of 8 bits allows for 256 discrete dimming levels, where 0 represents lights off and 255 is used for full brightness. However, because there is no handshaking, error checking or correction, the protocol isn’t used where safety is critical, but it is an extremely simple protocol and easily implemented in a low cost microcontroller.

DALI also uses differential signaling but allows bidirectional communication, supporting up to 64 individual ballasts, 16 groups, and the ability to broadcast to an entire network. It is relatively more complex than the DMX512 protocol, but offers significant advantages while still being able to be implemented in low cost and low power microcontrollers — some of which now feature dedicated DALI interfaces. 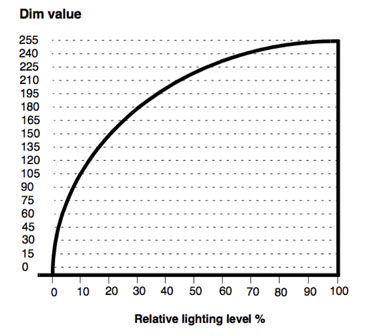 
It also offers 256 discrete dimming levels but they are automatically implemented as a logarithmic curve (Figure 2), which gives more natural control at lower brightness levels where the human eye is more sensitive. Because each DALI ballast can transmit as well as receive, the protocol supports diagnostics and fault control using dedicated commands. This allows ballasts to relay their status; all of their settings can be queried and reported, such as fade levels, the lamp’s condition and general faults. The protocol also supports special commands that are address-agnostic, which provides the broadcast capability. DALI interfaces are optically isolated from the microcontroller and Figure 3 shows a simple interface circuit. 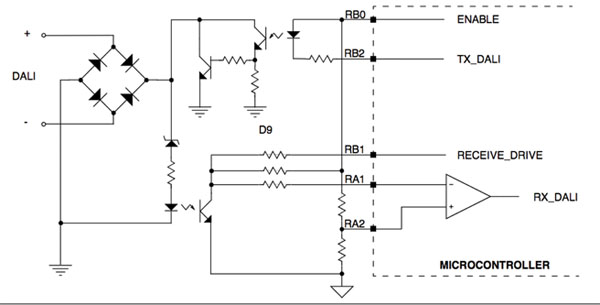 Figure 3: Interfacing a microcontroller to a DALI network.


However, while DALI has many advantages over DMX512, it isn’t without its limitations, which include a maximum cable run of 300 meters or a voltage drop of 250 mV for the entire length, with a maximum of 64 nodes.

Many manufacturers support one or both of the protocols with a range of MCUs, firmware, reference designs, and evaluation platforms.

Within industrial applications there is increased uptake of ‘intelligent’ lighting systems that can account for occupancy, time of day and even natural daylight levels. Using a single microcontroller, it is possible to interface to a range of low cost sensors that provide environmental data that can be used locally or, via a DMX512/DALI interface, within a wider network of lights.

Digital ballasts can be controlled using an external microcontroller connected to a DMX512 universe or DALI network. Retrofitting this level of control is particularly attractive in large installations, such as an industrial manufacturing plant or warehouse, where the existing infrastructure can be preserved. An example of how this can be achieved is provided in an application note created by NXP Semiconductor, which details how one of NXP’s ARM Cortex-M0 based microcontrollers, the LPC1112, can be used to create a DALI slave that in turn controls the digital ballast. 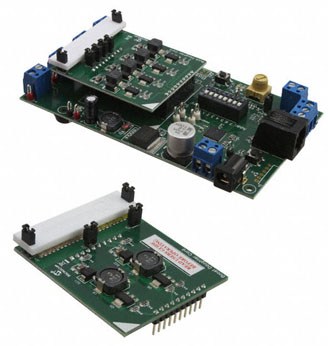 
STMicroelectronics has solutions that target both DMX512 and DALI. It offers the ST7DALIF2 featuring an 8 bit microcontroller core and a dedicated DALI interface, as well as the ARM Cortex-M3 based STM32F103x. Both devices are available from Hotenda, as are the other devices and evaluation kits covered here.

Those unsure whether DALI or DMX512 is the right protocol for their application may find the CY3267 PowerPSoC Lighting Evaluation Kit from Cypress useful. The PowerPSoC is unique amongst the microcontrollers mentioned here because it isn’t ‘just’ a microcontroller; as well as having an integrated DMX512 interface, it also features power components in the form of four N-Channel FETs capable of operating at up to 32 V. This integration of logic and power make the PowerPSoC ideal for lighting applications, as well as many others where the use of power switching using FETs is necessary. 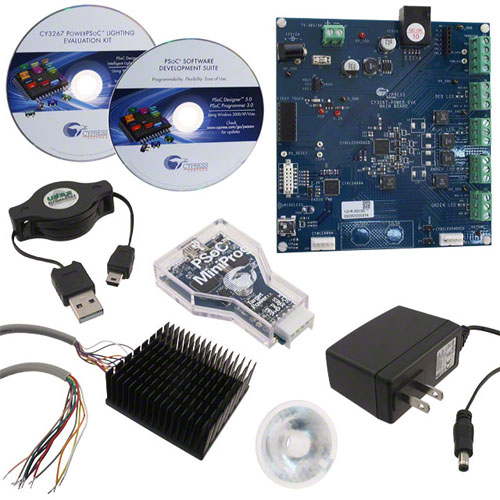 
The future of smart lighting

The idea of ‘no new wires’ is strong within the Smart Energy camp; it is predicated on the low-cost installation and retrofitting of control solutions that will enable existing installations to become ‘smart’ at little or no extra cost. For that reason the prospect of installing additional cables in order to gain control over energy-using products could be seen as an unwanted hurdle. In new lighting installations, the overhead of two extra wires to accommodate DMX512/DALI control signals is perhaps bearable, but the vast majority of savings can be made in existing installations where the cost of putting in new cables would be prohibitive.

For this reason there have been significant developments recently in the use of powerline communications (PLC). Most notably, in December 2011, the ITU (International Telecommunication Union) announced it had approved three worldwide standards for narrow band PLC that it hoped would help kick start the ‘Smart Grid’ market. PLC could offer significant benefits to lighting control, as it can effectively deliver control over the existing powerlines, while extending control networks beyond single or local installations.

Specifically, three new standards have been developed by the ITU in association with two industry alliances; the G3-PLC Alliance and the PRIME Alliance. Maxim is the key protagonist for the G3-PLC standard, while Texas Instruments and STMicroelectronics are members of both. As both standards are field-proven, there are already solutions available, such as the G3-PLC chipset (see MAX2990) from Maxim. Such controllers could easily work in unison with DMX512/DALI based lighting systems and possibly someday remove the need for additional cables altogether.

The lighting industry has been at the forefront of innovation for over 100 years and is arguably the most forward-looking sector in the electronics industry. It is playing an important role in the transition towards smarter energy.

Practically all global applications today are driven by standards that inherently make use of protocols; they offer flexibility with guaranteed interoperability. The concept of the ‘smart home’ may still be embryonic, but the use of digital control in industrial lighting installations is already well established and on the increase. The dedicated solutions highlighted here indicate there is ample room for further growth.

Through the support of lighting protocols with dedicated microcontroller solutions, the semiconductor industry is also playing its part, helping to meet demand for smarter control that will continue to ensure the energy we must generate and consume is done so in the most responsible way possible.