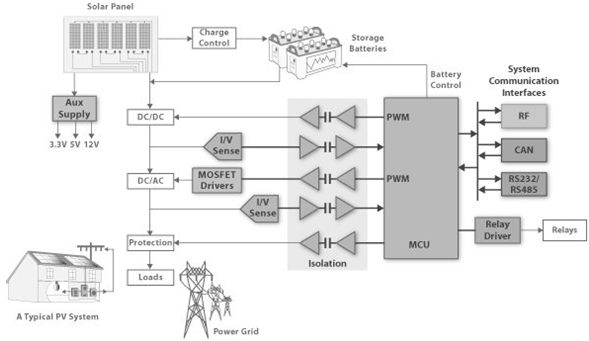 Engineers can use digital isolated gate drivers, such as the Analog Devices (ADI) ADuM3220, to control the switches of an H-bridge output circuit in a solar inverter (see Fig. 2). Based on the Analog Devices iCoupler technology, the ADuM3220 is a 4-A isolated dual-channel gate driver that offers full galvanic isolation with output that is electrically and physically isolated from input. Digital isolators, such as the ADuM3220, typically exceed the performance of alternative isolation technologies, providing the speed necessary in feedback operations. 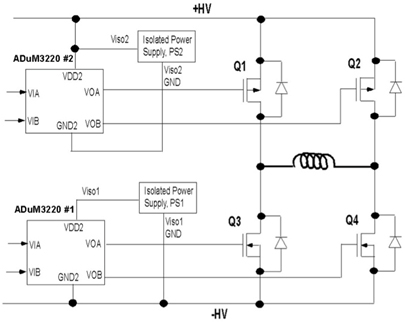 Figure 2: In a single-phase inverter, two ADuM3220’s can control the four switches of an H-bridge output circuit. (Source: Analog Devices.)

SiLab’s ISOpro devices comprise an RF transmitter and receiver located on separate die but separated by a differential capacitive isolation barrier – all contained within a standard package. A ‘logic 1’ on the input causes the transmitter to turn on an RF carrier that propagates across the isolation barrier to the receiver to generate a ‘logic 1’ on the output. The absence of input voltage disables the transmitter so no carrier is present, helping ensure signal integrity during power-up and power-down. 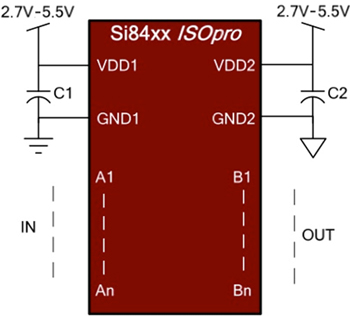 Figure 3: Digital isolators typically require only a pair of small external VDD bypass capacitors for most applications, making them as easy to use as a standard CMOS logic gate. (Source: Silicon Labs.)

The simplicity of this design translates into tighter performance parameters because the timing parameters become strictly a function of the device’s internal timing precision and propagation delay. For example, in the SiLabs Si84xx family, rise and fall times vary by only 1 ns versus temperature or supply voltage.

Engineers can use digital isolators from different vendors to simplify system design and achieve improved performance and efficiency. The Texas Instruments ISO724x series of digital isolators achieves a maximum pulse-width distortion of 2 ns and jitter down to 1 ns at 150 Mbits/s.

Many devices in this class, including the Texas Instruments ISO724x and the SiLabs Si844xx digital isolators, rely on semiconductor oxide layers for their primary isolator. Semiconductor fabrication methods are well controlled and uniform, so manufacturers can deposit oxide to any depth to achieve a desired insulation level and set a desired maximum breakdown voltage. For TI isolators, this approach yields galvanic isolation of up to 4000 V and life expectancy of over 25 years at the TI ISO724x’s rated maximum working insulation voltage (VIORM) of 560 V (see Fig. 4). Analog Devices quotes a 50-year minimum lifetime at 565 V maximum working insulation voltage for its ADuM140x quad-channel digital isolators. Digital isolator lifetimes will likely surpass the rated lifetimes of other components in a solar PV installation. 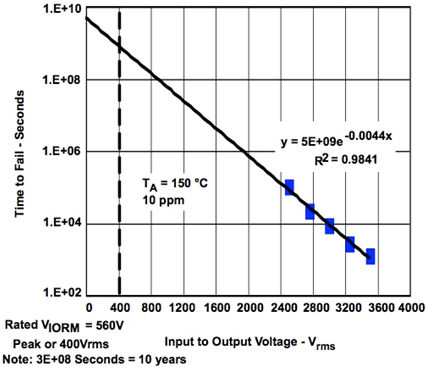 High CMTI is particularly critical in ensuring data reliability in control paths. The SiLabs ISOpro isolator achieves high CMTI through its combination of a fully differential signal path and frequency selectivity of the receiver, which combine to help enhance noise immunity. In the equivalent circuit (see Fig. 5), the input-to-output capacitance (CCM) is substantially lower than the CCM found in optocouplers. As shown on the right side of Fig. 5, high CMTI means that transients passing through the device will not result in false highs or lows.

For the SiLabs Si844xx, the result is a typical CMTI of 25 kV/µs. In fact, other devices of this class demonstrate similar performance, including the ADI ADuM140x Quad-Channel Digital Isolators, which typically spec out at 35 kV/µs. The NVE IL26x five-channel digital isolators typically achieve 35 kV/µs, and TI ISO724x devices usually exhibit a CMIT of 50 kV/µs. 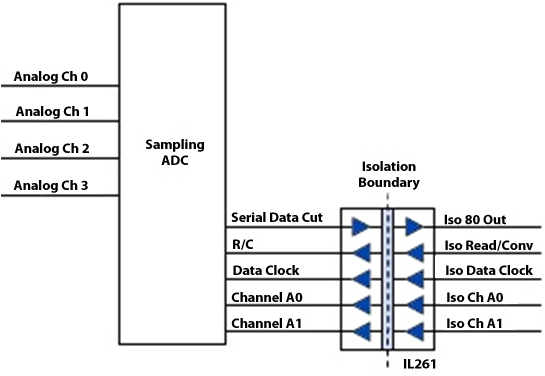 Alternatively, engineers can take advantage of the high functional integration available with these parts. Digital isolators can be combined with other functions on the same die to yield single-chip isolated ADCs and isolated communications transceivers, among others. The result is the ability to create more functionally rich designs with lower part count and increased reliability. For example, the AD7401A is a second-order sigma-delta (Σ-Δ) modulator that converts an analog input signal into a high-speed one-bit data stream by combining an on-chip reference and on-chip digital isolation based on the ADI iCoupler technology (see Fig. 7). 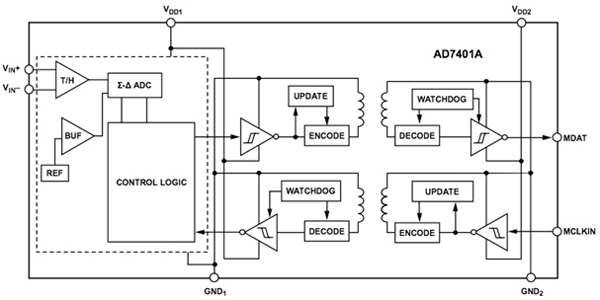 Figure 7: The ADI AD7401A is a single device that integrates a sigma-delta ADC with an on-chip reference and isolation circuitry. (Source: Analog Devices.)