LEDs offer many advantages for mainstream lighting. Factors such as longevity, high efficiency, and robustness are appealing to consumers, particularly as the price of the technology continues to drop.


LEDs offer many advantages for mainstream lighting. Factors such as longevity, high efficiency, and robustness are appealing to consumers, particularly as the price of the technology continues to drop.

However, there are some drawbacks. Chief among these is that LEDs are not a ‘drop-in’ replacement for traditional light sources such as incandescent bulbs or fluorescent tubes. LEDs demand special drivers to suit their fickle power demands. Moreover, consumers used to dimming their conventional lights by simply turning down the supply voltage find that the same method works poorly for solid-state lights.

This article considers why changes in voltage affect the light output and color emitted by an LED. The article then describes analog and digital dimming techniques before concluding which is best for mitigating the worst effects on light quality caused by current regulation.

LEDs emit light only when an external applied voltage is used to forward bias the LED above a minimum threshold value. Above this threshold voltage (V0), the electrical potential energy is sufficient to propel electrons out of the n-type material, across the junction barrier (or energy gap), and into the p-type region. In the p-type region, there is a good chance an electron will recombine with a vacancy or “hole”, when it will give up quanta of energy in the form of a photon.

Above the threshold voltage, the current and light output increases exponentially as the bias voltage across the LED is increased because many more electrons are released across the junction.

LEDs operate according to the laws of quantum mechanics, so there is a correlation between the threshold voltage and the energy of a photon. The relationship is described by the formula below:

Eg is the magnitude of the energy gap, V0 is the threshold voltage, f and λ are the frequency and wavelength of the emitted photons, c is the velocity of light, e is the electronic charge, and h is Planck’s constant.1

It is important to note that the wavelength and frequency of every emitted photon from a given LED with a given threshold voltage is not exactly the same. Wavelengths and frequencies can vary according to a bell-curve shaped probability function centered on a dominant frequency. The reason for this distribution is that recombination paths can vary in length with longer paths, resulting in photons of slightly shorter wavelengths (Fig. 1 and Fig. 2). The dominant wavelength and frequency is that associated with the average recombination path length. 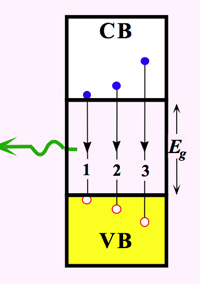 Figure 1: Recombination paths between conduction and valance bands can vary in length. 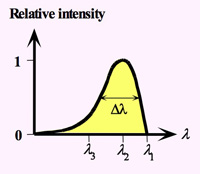 Figure 2: Typical output spectrum for the arrangement shown in Figure 1.


The drawback of analog dimming

Figures 3(a) and (b) show detail of the forward voltage vs. forward current for a commercial high brightness LED, and the relationship between forward current and relative luminous flux (light output). In this example, the LED is an OSRAM OSLON SSL LED, which is rated at 104 lm/W. From the graph it can be seen that conduction starts at around 2.87 V. The manufacturer recommends operating with a typical forward voltage of 3.1 V. 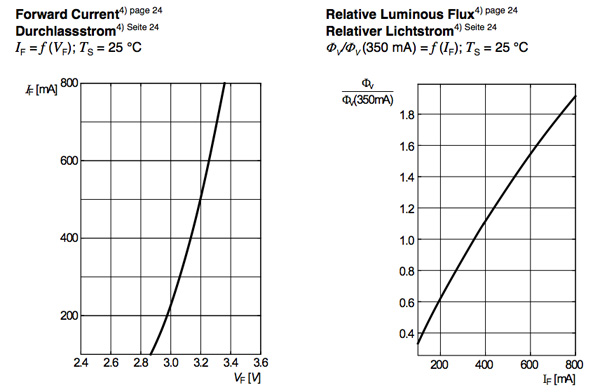 
Decreasing the forward voltage, for example by using a variable resistor in series with the LED, dims the LED. This analog technique for dimming is popular because of its simplicity and low cost.

Unfortunately there is a big drawback. Changes in forward voltage alter the volume of the recombination zone in the chip and therefore the recombination path lengths, shifting the dominant frequency of the output spectrum. It turns out that reducing the forward voltage – to dim the output – moves the dominant frequency to a slightly shorter wavelength.

Figure 4 shows the relative spectral emission curves for LEDs of various colors. The curve of most interest here is the blue LED, centered on a wavelength of about 470 nm. This is because virtually all ‘white’ LEDs use a blue device in conjunction with a phosphor that emits yellowish light. The combination blue and yellow produce a good approximation to white (see the TechZone article “Whiter, Brighter LEDs”). The dashed curve is the eye’s sensitivity function. 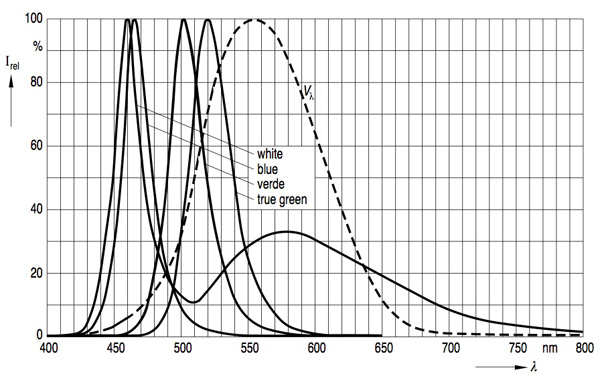 
The curves in the figure are plotted at one particular forward current (20 mA). But Fig. 5 illustrates what happens to the dominant frequency of the blue LED as the forward current is varied. 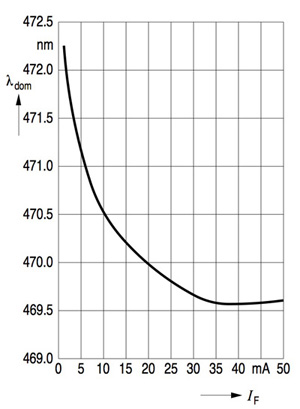 Figure 5: Variation in dominant frequency of a blue LED with increasing forward current. (Courtesy of OSRAM.)


What effect does this relatively small shift in dominant frequency have on the LED’s light as perceived by the consumer? It turns out that it is actually quite significant.

Figure 6 shows how the chromaticity coordinates for a white LED change with increasing forward current on the Commission Internationale de L’Eclairage (CIE) 1931 color space. This is a standardized system for defining the color of the light (see the TechZone article “Lighting's Color Science”). It can be seen the over a 10-to-50 mA range, the change in color is relatively large – certainly big enough to be detected by the consumer. 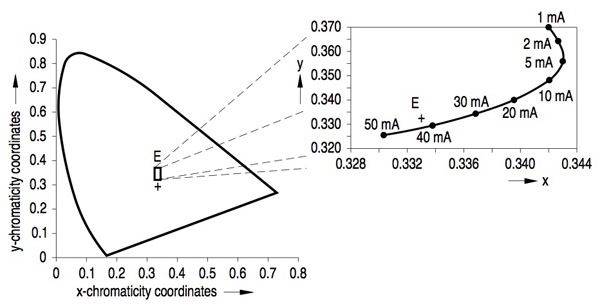 Figure 6: Chromaticity coordinates for a white LED with varying forward current (at 25°C). (Courtesy of OSRAM.)


In some circumstances, and over small ranges, the color change caused by analog dimming might be acceptable. However, consumers, who are used to traditional dimmed room lights remaining a constant color, are often disappointed with the color change of a dimmed LED source in this application.

A better technique for LED dimming is to keep the forward voltage (and forward current) constant, but use pulse width modulation (PWM) to rapidly cycle the LED on and off. By altering the duty cycle of the pulse train, the light can be dimmed, but because the forward voltage during the “on” period is kept constant, there is no shift in the chromaticity coordinates, and the color is consistent.

The duty cycle is the ratio of the pulse duration (tP) to the signal period (T). A switching frequency above 200 Hz is typically fast enough to eliminate flicker such that the eye sees constant illumination but frequencies higher than 300 Hz can cause problems, because the chromaticity coordinates can shift during the brief interval when switching the LEDs on and off. Figure 7 shows three different pulse trains, all operating at a constant forward current. The top offers a mid-level illumination, the middle is dimmer, and the bottom is brighter.3 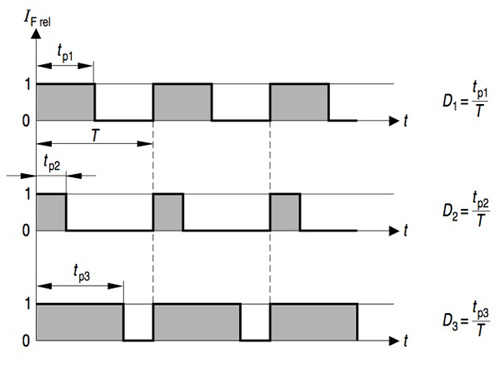 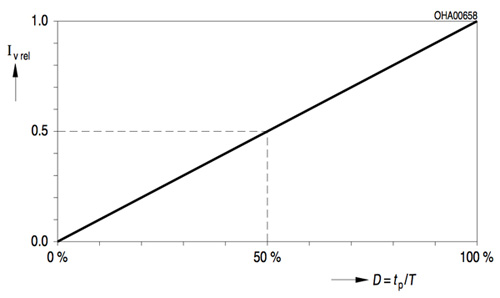 
Implementing PWM control is relatively straightforward if the LED driver used to power the devices has an enable or shutdown function. Maxim’s MAX1916, for example, limits leakage current to the LEDs to 1 µA as soon the part is disabled by pulling the EN pin low. Pulling the EN pin high applies the programmed forward voltage to the LEDs. By applying a PWM signal to the EN pin, the LED’s brightness is proportional to the signal’s duty cycle.4

A PWM signal can be provided from a microprocessor's I/O pin or one of its peripheral devices. (The number of brightness steps available depends on the width of the counter register used for that purpose.)

Silicon vendors ease the implementation of PWM dimming by allowing a direct connection from the logic chips, generating the PWM signal to their LED drivers. National Semiconductor’s LM3407, for example, is a constant current output switching converter power supply for high power LEDs. The chip is suitable for automotive, industrial, and general lighting applications. The LM3407 features a dimming input to enable LED brightness control by PWM. The company has also made available a handy evaluation board so that engineers can experiment with this driver, the LM3407EVAL-ND.

Similarly, Linear Technology supplies the LT3796. This LED driver is a switching converter designed to regulate a constant current or constant voltage. The manufacturer claims the fixed frequency and current mode architecture results in stable operation over a wide range of supply and output voltages. The chip features a PWM input that allows for LED dimming ratios of up to 3000:1.

For its part, Maxim offers an LED driver that integrates the PWM function onto a single chip. The MAX16834 is a current-mode high-brightness LED driver. In addition to driving an n-channel power MOSFET switch controlled by the switching converter, the device also drives an n-channel PWM dimming switch to dim the LEDs. The MAX16834 features constant frequency peak current-mode control with programmable slope compensation to control the duty cycle of the PWM unit. Figure 9 shows an application circuit for the chip. 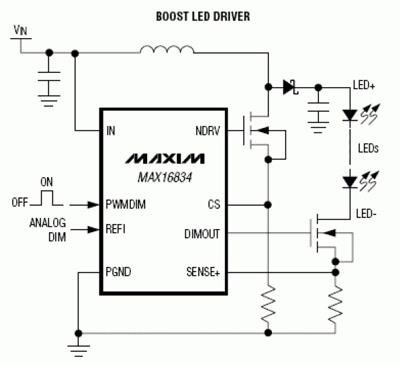 As LEDs enter mainstream lighting applications, consumers expect operation to imitate traditional lighting. Manufacturers have worked hard to ensure the devices are bright and mimic the color of incandescent bulbs or fluorescent tubes.

Dimming of LEDs is more of a challenge because of the unique power demands of the chip. Forward current is exponentially related to forward voltage, so careful control is needed to keep the voltage within a narrow range. For inexpensive applications where low dimming ratios suffice, analog dimming by decreasing the forward voltage is acceptable. However, for applications where light quality is important such as room lighting, analog dimming is unpopular with consumers because the color of the light changes noticeably.

Implementing PWM control – with the forward voltage and forward current kept constant – allows wide dimming ratios without any change in the color of the light. By utilizing the latest generation of LED drivers with built-in PWM capability, it is relatively easy to implement such digital dimming into an LED lighting design.