See how a digital-control loop based on Intersil's ZL8800 creates bandwidths and faster response times that are otherwise unobtainable with analog control.

This article investigates a digital-control loop to show that it can provide bandwidth that was previously unobtainable with analog control. It is based on an Intersil white paper¹ titled “Achieving a Stable Power Supply with Fast Transient Response through Digital Control.” In addition, using a design example the article will demonstrate that the digital control loop can offer faster transient response with improved performance while maintaining a stable loop.

In practice, a number of architectures are available to the point-of-load (POL) converter designer. Among them, the most common approach is the analog-fixed-frequency voltage-mode control with external compensation. It is popular because of its ability to adjust poles and zeroes to extend the converter bandwidth while compensating for a range of output capacitors. With a fixed switching frequency, the selection of passive components is predictable and optimal. However, the downside is that with numerous external components, the compensation is complex, resulting in additional design time. The designer also must compromise transient response for a high-bandwidth performance or vice a versa.

Higher bandwidth also can create stability issues in the field, according to Intersil’s white paper. There are several factors that affect the values and operating conditions of passives, especially inductors and capacitors. Consider, for instance, factors like current, temperature, frequency and aging, which have significant impact on inductors. As noted by Intersil, the inductance of an inductor can vary significantly across the rated-current range, dropping to less than 50% of its initial value. Likewise, based on operating conditions, output capacitors also exhibit wide variations in capacitance and equivalent-series-resistance (ESR) values. According to Intersil, with changes in DC bias and temperature ceramic capacitors can drop to less than 40% of their stated value, thus changing the pole location of the output filter of the power supply.

Consequently, the trade-off is using lower switching frequency and higher quality components, both adding to the size and cost of the power supply design. But fortunately, as we will see, the advent of digital control seems to overcome the drawbacks of analog control.

Unlike analog solutions, a digital controller like Intersil’s fourth-generation ZL8800 can react to a transient load step in a single cycle, reducing the amount of output capacitance needed in a power supply system, thereby cutting cost and reducing board space. According to its product datasheet ZL8800 is a dual-channel, fully digital ChargeMode controller with unique compensation-free modulation capability that allows DC/DC converters to meet transient specifications with minimum output capacitance.

Using the ZL8800 digital controller, a typical DC/DC converter circuit is shown in Fig. 1. The dual-channel digital controller is capable of converting a +12 V or +5 VDC to lower-output DC voltages in the 0.6 V to 5.0 V range, making it suitable for powering POL applications. According to Intersil, a full-digital-control loop and internal non-volatile memory enables the ZL8800 to eliminate a multitude of external components normally found on analog controllers. What’s more, with ChargeMode control-loop technology the burden of selecting compensation components is eliminated. 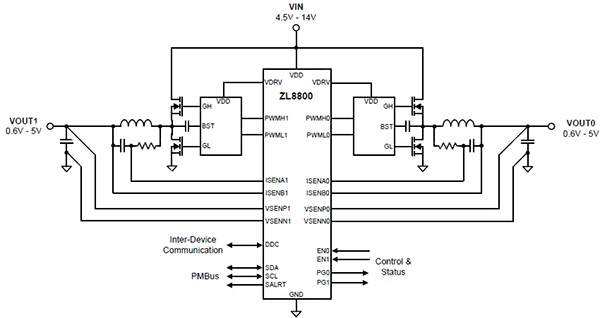 By precisely modifying the duty cycle so that the amount of charge lost on the output capacitor can be replaced in a single cycle, the ZL8800’s ChargeMode control scheme responds immediately to any transient event, says the supplier, noting that this is realized by over sampling the output voltage so that corrections can be made without having to know the actual capacitor value. The key advantage of this approach is that a load transient can be responded to and possibly corrected in one cycle with minimal ringing or overshoot. By comparison, an analog control circuit cannot react as quickly without risking instability and excessive ringing.

Figure 2 shows ZL8800’s ability to respond in a single cycle to a 10 A load step with a slew rate of 10 A/µs. An interesting fact here is that the fast-transient response is achieved without any loop compensation and the ZL8800 ChargeMode control architecture is inherently stable. This demonstrates that for any combination of inductance and output capacitance, the control loop will remain stable. 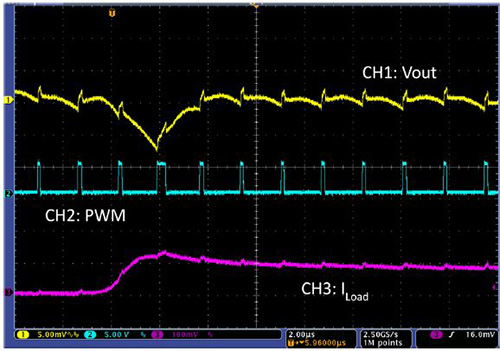 Figure 2: Digital controller ZL8800 responds to a 10 A load step in a single cycle.

Since all of the parameters of Intersil digital controllers can be configured using PMBus commands and the new PowerNavigator GUI, the part facilitates quick and simple adjustment in real time to optimize performance. “Once the desired parameter is set, it can easily be stored in the non-volatile memory of the controller,” says Chance Dunlap, Intersil’s marketing manager for digital power products. According to Dunlap, the feedback gain of ZL8800 can be adjusted using the PMBus command ASCR_CONFIG (PMBus address: DFh), which is a 4-byte instruction configuring the feedback-loop settings. With the ZL8800 there is independent-gain control and also a residual setting which adjusts dampening if required, adds Dunlap.

For design purposes, Dunlap’s recommendation is to start with the default-feedback gain of 256. If different transient performance trade-offs are required, it can easily be changed in the GUI (typical range for the feedback gain is 100 to 1,000). The benefit of increasing the feedback gain is that faster transient response will be observed, allowing for selection of smaller output capacitors. But as with all high-bandwidth converters, the resultant drawback will be a slight increase in the PWM jitter as the device responds to every perturbation in the output voltage.

Figure 3 shows ZL8800’s transient response with a feedback gain setting of 250. The corresponding-loop bandwidth is 26 kHz. “Optimization of the feedback gain will occur through the appropriate trade-off of gain either through observing the large signal response by testing the power supply with a load transient, or small signal measurement of the crossover and phase margin,” asserts Dunlap. 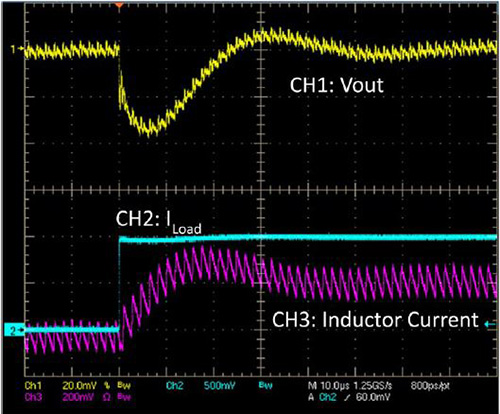 Figure 3: Transient response with a feedback gain setting of 250. The measured loop bandwidth is 26 kHz.

Table 1 shows the impact of increasing the feedback gain on the ZL8800 demo board and how it changes the crossover frequency (bandwidth) and phase margin. Consequently, increasing the gain will result in faster transient response with improved settling time, as illustrated in Fig. 4.

Measurements depicted in figures 3 and 4 were made with a 10 A load step applied at 100 A/μs. Other parameters were as follows: Furthermore, to achieve a stable solution with no compensation, the Intersil white paper indicates that the same ChargeMode control loop algorithm was applied in all measurements.

In summary, the measured transient response for various feedback gain settings show that the digital controller ZL8800 can react to a transient event much faster, with improved settling time and in a single cycle without any loop compensation. Besides higher bandwidth and faster transient response, the digital controller also reduces the amount of output capacitance needed, resulting in cost and board space savings.

For more information on the product discussed in this article, use the link provided to access product pages on the Hotenda website.