When sensors are located some distance from an MCU, communications become an issue.


When sensors are located some distance from an MCU, communications become an issue. Two modern sensor protocols developed by the automotive industry address these issues and make better use of new sensor IC topologies.

The problem of reporting a sensor signal has been present since the early ages of the sensor. Indeed, there is no point in sensing a parameter if the information cannot be displayed, communicated, or shared.

Initially, the signal was reported more or less mechanically and locally. For example, a Bourdon pressure gauge, a manometer, reports directly the measured pressure through a moving arrow linked to the tube and pointing on a scale attached to the frame. A mercury thermometer reports the sensed temperature through the length of the mercury column.

However, in order to process the information remotely or use the sensor in a closed-loop system (sensor and control), it is mandatory to get the sensing information in the form of an electrical signal. With that perspective, a mechanical to electrical converter has been added to the previously mentioned pressure gauge to realize a real transducer with or without local signal conditioning.

Other types of sensors have an output which can be directly processed electrically. For example, a thermistor is a resistor in which resistance varies with temperature. The resistance of a piezoresistive strain-gauge changes with the strain due to the applied pressure. Those variable resistors are introduced in a Wheatstone bridge providing an electrical voltage that is usually locally conditioned prior to being transmitted further. A rotary potentiometer (resistive divider), used as an angular position sensor, or a variable reluctance magnetic sensor, used as a rotary speed sensor, directly transmits an output voltage without specific signal conditioning.

Until recently, due to the nature of the sensing elements and signal conditioning techniques, the reported signal was an analog electrical voltage, typically (but not always) ratiometric to the actual supply voltage applied to the sensor. This was valid for discrete sensors, both with or without signal conditioning, as well as for integrated active sensors.

Since the mid-1990s, the industry has moved toward digital communication, and the advent of smart CMOS sensing ICs featuring on-chip digital signal processing has accelerated that migration. This article describes the move, from the initial steps and motivations to the most recent advances, with emphasis on the point-to-point communication between a standalone sensor and the control unit.

Given the intrinsic nature of sensing elements and the associated analog signal conditioning circuitry, analog output voltage has been adopted as the initial and most logical reporting method between the sensor and the Electronic Control Unit (ECU), where the signal is combined with other data for further processing.

The easiest move from analog output to digital output on a single signal wire is to convert the analog level into a digital signal at a given frequency and with a duty cycle, where

is proportional to the sensor signal (see Figure 2).

The encoding is typically done through comparing the analog signal and a reference sawtooth signal at the desired frequency (see Figure 3). The decoding is done at the ECU side through a timer I/O.

The physical layer is a digital driver either low-side (open-drain), high-side (open-drain), or push-pull. The latter is preferred for better EMC, especially conducted and radiated emission, and jitter/noise performance. The high-side/low-side driver schemes need slope control on the falling or rising edge for best performance.

The Pulse Width Modulation (PWM) signal is typically independent from the supply voltage and consequently, this protocol is preferred when operation has to be guaranteed over a large supply voltage range. PWM is also suitable for a two-wire interface, where the low and high digital levels are coded into variations of the supply current (IDD_LO & IDD_HI), and the information can be shared with the ECU using only the supply and ground connections.

Despite the spread of PWM, for legacy and compatibility reasons the analog protocol remains extremely popular. However, modern smart sensors (see Figure 4) often feature a DSP core, operating at lower supply voltage for technology reasons, rather than complex Analog Signal Processing (ASP) circuitry. Consequently, the ratiometric analog output voltage is obtained on those sensors by converting the digital signal back into the analog domain through a DAC and a buffer. A digital interface is definitely more natural. Furthermore, modern ECUs with state-of-the-art microcontrollers can also benefit from a direct digital interface with the remote sensor rather than through an ADC.

The PWM can be easily implemented following the topology mentioned in Figure 4 though the implementation of a digital counter and digital comparator. However, the PWM has some limitations which are no longer acceptable for many applications, especially the true resolution at slightly high speed. Instead, 10 bits at 1 kHz is usually considered as a realistic specification. Beyond 1 kHz, the resolution drops rapidly. Furthermore, the PWM protocol is quite limited in reporting diagnostic or status information.

To reflect the new sensor IC topology and the system needs in terms of data content, resolution, response time, latency time, accuracy, and diagnostic, new protocols for point-to-point communication between sensor, and ECUs have been developed. In that context, the automotive world has adopted SENT and PSI-5.

The Single Edge Nibble Transmission (SENT) protocol was initiated by the Powertrain division of General Motors and several partners in 2005. It was then developed by a Workgroup of the Society of Automotive Electronics under the reference J2716.

As mentioned earlier, the SENT protocol attempts to modernize and standardize the interface between the numerous types of remote sensors, such as position, pressure, mass airflow and temperature, and the engine management system ECU.

The SENT protocol (see Figure 5) can actually be considered as an enhanced PWM. Indeed, the telegram consists of eight nibbles (1 nibble = 4 bits) which are time-coded (that is, not duty cycled) in a PWM way. A first pulse (synchronization) is generated at the beginning of the telegram as a time-reference for the subsequent nibbles. 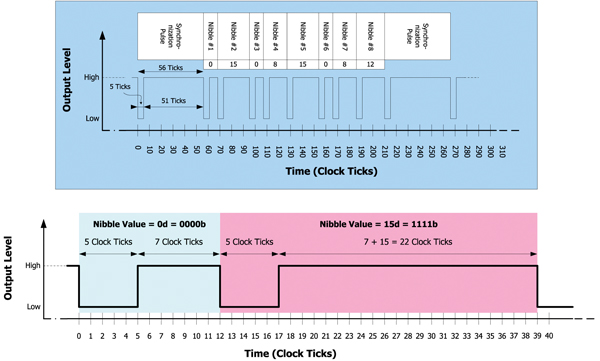 The longest message is less than 1 ms and 32 bits are transferred, of which up to 24 bits (six nibbles) are dedicated for the data (Nibbles #2… #7). The remaining two nibbles are allocated for reporting status and communication (Nibble #1) and the CRC (checksum — Nibble #8).

The SENT protocol was first adopted for powertrain applications, such as position sensors and pressure sensors, but it is also used for steering sensors (steering angle, steering torque). It should become popular for other automotive (chassis) and non-automotive applications.

Some derivates of the SENT protocol have been proposed such as Short PWM Code, which is similar to SENT but allows a synchronization mechanism and a shorter transmission time, due to flexibility in the number of nibbles that are actually reported.

The peripheral sensor interface, PSI-5, is the successor of PAS-4 (PANAMSAT 4), which has been around for more than ten years in safety applications such as accelerometer sensors for airbag systems. Many facets of the PSI-5 concept, for example robustness and reliability, have been successfully proven in the field. PSI-5 is driven by Autoliv, Bosch, and Continental.

The physical layer of PSI-5 (see Figure 6) is a two-wire interface. The bit patterns are transmitted in a current pulse on the top of the nominal supply current drawn by the IC (see Figure 7). This gives PSI-5 a serious advantage in terms of EMC for both conducted and radiated emissions. Furthermore, the data rate can go up to 250 K bits/second with short latency time.

Last but not least, PSI-5 is extremely flexible and specifies synchronous and asynchronous modes as well as several multi-slave bus architectures. PSI-5 can also be implemented as a bidirectional interface.

The implementation overhead is limited but usually requires a dedicated receiver IC to convert the signal-in voltage and decode the content.

A low level (IDD_LO) is represented by the normal (quiescent) current consumption of the sensors. A high level (IDD_HI) is generated by an increased current sink of the sensor (?IDD). The current modulation is detected within the receiver.

Manchester coding is used for data transmission. A logic "0" is represented by a rising slope and a logic "1" by a falling slope of the supply current IDD in the middle of TBIT.

The basic telegram is typically 13 bits long for 10 bits data (D0-D9) + 2 Start bits (S1-S2) + 1 Parity bit (P — even parity). However, two consecutive messages can be used to transmit 16 bits data. This can be further extended with diagnostic information and error correction information.

PSI-5 has already found applications in safety and steering applications, for example, controlling steering torque. A sub-standard focused on vehicle dynamics applications is currently under development.

Other digital protocols are available, but are not suitable for point-to-point communication between the sensor and the ECU.

The SPI bus is typically used for embedded systems in which the sensor reports directly to a microcontroller located a short distance away in the same module or system. The three or four necessary connections are PCB tracks, which is acceptable for SPI communications. In the case of a remote standalone sensor, SPI is not acceptable for cost and robustness reasons.

Bus protocols such as CAN, LIN, or I²C are intrinsically developed for networking rather than point-to-point communication. The implementation overhead is not negligible, especially for the CAN.

Analog communication between remote sensors and ECUs will eventually lapse. With the modernization of sensors and control units, the digital era will soon dominate. However, this will only happen thanks to robust and reliable protocols with rich data and diagnostic content, such as SENT and PSI-5.