Capacitive sensing is emerging as a popular interfacing alternative to switches and knobs in consumer electronics, front panel display applications, and many industrial and automotive sensors.


Capacitive sensing is emerging as a popular interfacing alternative to switches and knobs in consumer electronics, front panel display applications, and many industrial and automotive sensors. This article describes different kinds of noise impacting any capacitive sensing technology and the methods that can be implemented to overcome different kinds of noise under varied environmental conditions.

At the heart of any capacitive-sensing system is a set of conductors on a PCB which interact with electric fields. Placing a finger near fringing electric fields adds capacitance to the system. As shown in Figure 1 below, the additional charge storage capacity added by the finger is known as CF (finger capacitance). The capacitance of the sensor without a finger present is denoted as CP (parasitic capacitance). The measurement system determines the variation in CX (total capacitance) due to the addition of CF for the detection of the finger. This variation in capacitance due to a finger is in the range of less than 1 pF. External noise affecting the sensors either has roots in charge or voltage, and this produces noise at the digital output that looks like capacitance change on the input. This induces a challenge in terms of avoiding any noise, which can also cause the same amount of capacitance change. 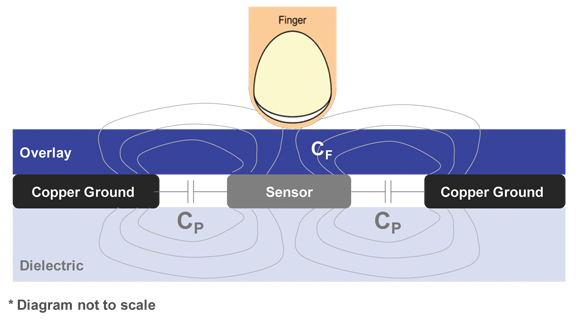 Figure 1: Basics of Capacitive Sensing – capacitance to be measured.

Noise is a random fluctuation in an electrical signal. Noise generated by electronic devices varies greatly, as it can be produced by several different effects and sources. Noise can also be described as a summation of unwanted or disturbing energy from natural and man-made sources. Some examples of noise include power supply noise, Wi-Fi transmitters, mobile phone transmitter, and environmental conditions like humidity and temperature changes.

As explained above, noise may be interpreted as CF which can cause a false detection of a finger presence. The problem is to reduce the impact of noise on CX as much as possible. The parameter, which must be taken into account for this, is the SNR (Signal to Noise Ratio). The SNR should be as high as possible with a minimum of at least 5:1; i.e., capacitance change from a finger touch should be five times more than a capacitance change from noise sources.

One important aspect for overcoming noise in capacitive systems is to have a robust sensing method which has low input impedance. There are various capacitive sensing controllers on the market today using various sensing algorithms such as the relaxation oscillator method, methods based on switched capacitor front-ends, mutual capacitance sensing, phase delay, and amplitude measurement, and others.

The two most prevalent methods are: Explaining noise with relation to capacitive sensing thresholds

Figure 2 shows the different noise amplitude levels and the impact on robustness. 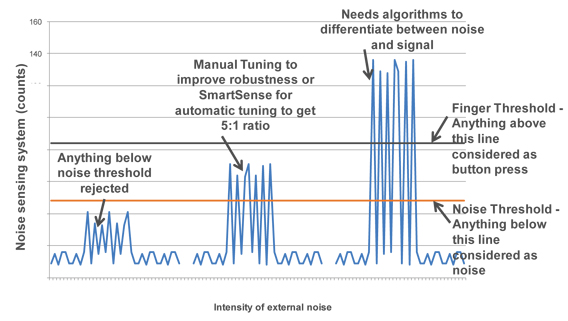 As an example, the RO (Relaxation Oscillator) method has a higher input impedance than the SC (Switched Capacitor) method. This makes the RO method less immune to external noise. Many of the RO methods in the market usually have noise immunity dependent on the power supply voltage.

As seen in Figure 3, switched capacitor-based capacitive sensing inherently has equivalent resistance (determined by the frequency of operation and parasitic capacitance of the sensor) in parallel to input, providing lower input impedance by default. An RO method does not have this special equivalent resistance, leading to higher input impedance. Most of the time, It is not possible to add an external parallel resistance to RO method to improve immunity without also affecting the performance of the sensing method or circuit.

Figure 4 shows how the risk of getting a false button press increases when a circuit is operated in noisy environments (especially with circuits that have higher input impedance) when layout best practices are completely followed. 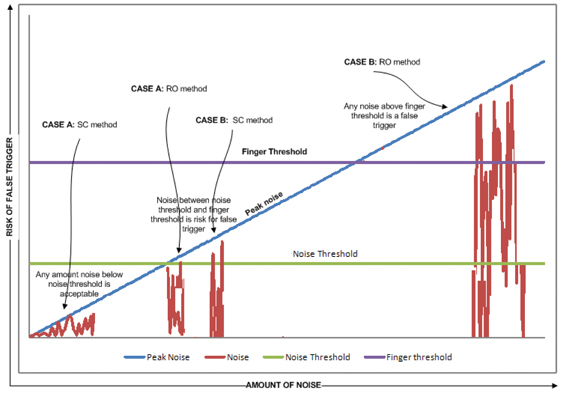 Any signal that has amplitude less than the noise threshold is rejected automatically. Thus, any amount of noise below noise threshold is not a concern for any sensing method. However, when both methods (SC and RO) are operated in the same environment (say Case A), the amount of noise that can enter into the system is different based on the sensing method.

If we take the example of Case B, the RO method will produce a false trigger while the SC method will have noise levels in between the noise and finger thresholds which can be further fine-tuned to improve the SNR.

Any system designed for the white good, consumer, or industrial markets needs to be certified as per the specification of International Electro Technical Commission (IEC) by UL, FCC, or the respective regulatory body of the country in which the product will be sold. During this certification testing, heavy amounts of radiated and conducted noise are purposefully injected into the system to make sure there is stable and harmless operation of the product in the field. For many systems and circuits, passing the certification tests for the respective regulatory body of each country is a real challenge. It is thus important to choose a robust sensing algorithm for the capacitive user interface design. This is to make sure the quality of the product in the field and the regulatory body certification requirements are met.

There are a number of technologies and techniques available for improving robustness: Limitations induced by different kinds of noise

Although robustness can be improved by a number of techniques listed above, there are still some limitations based on the end system requirements which are induced by these different kinds of noise. Some of these are listed below: Solving limitations due to noise

Advanced auto-tuning algorithms address both of the limitations mentioned above arising from different kinds of noise by dynamically adjusting compensation to match changing model and environmental conditions. Automatically adjusting baseline and thresholds also speeds system design and achieves a constant SNR of 5:1 to optimize sensor performance. 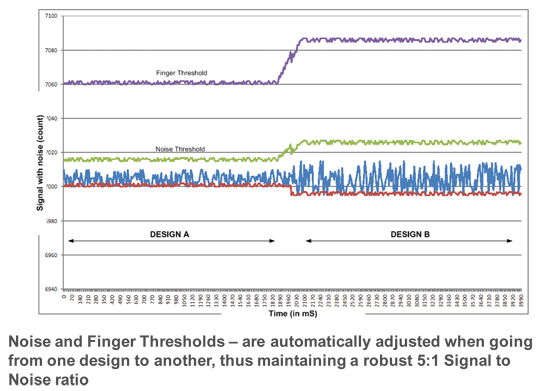 Figure 5: Different noise levels in Designs A and B being compensated automatically. 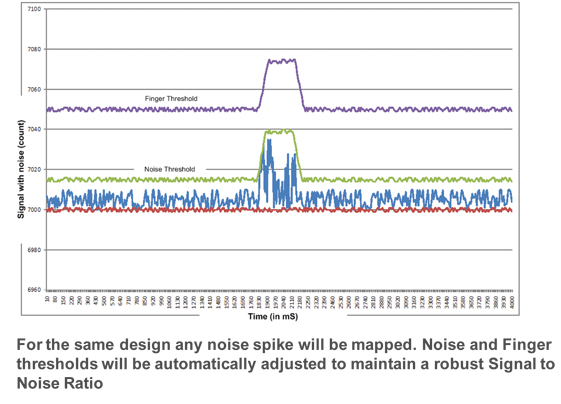 User interface and industrial design are the central driving forces behind creating and improving most of today's consumer electronic products. With this in mind, manufacturers are focusing on innovative techniques such as capacitive sensing for replacing space-consuming buttons and switches. Recent advances in capacitive sensing technology have not only brought down the expense of touch sensors to the point where they are cost-effective to implement in a wide range of consumer products, but also enable robust performance. Using the technologies and techniques presented here, it is possible to implement a robust capacitive sensing method in harsh noisy environments, making capacitive touch sensors a practical alternative to mechanical components.