EPC introduces EPC9022 through EPC9030 which offer half-bridge topology with on-board gate driver designed to simplify the evaluation of the EPC8000 family.


Long talked about, wide bandgap gallium nitride-on-silicon (GaN-on-Si) transistors are now commercially available. They are being touted for replacing silicon-based MOSFETs, which are turning out to be inefficient for many high-performance power supply designs. Recently, several suppliers of GaN-on-Si-based HEMTs and FETs have emerged in the marketplace, among them Efficient Power Conversion (EPC). For the last four years, the company has been expanding its family of commercially available enhancement-mode (normally-off) GaN FETs or eGaN FETs. Today, there are approximately eleven members in the low-voltage eGaN FET family, and about eight in the ultra-high-frequency line.

These high-performance, wide bandgap transistors are being recommended for use in a variety of high-efficiency, high-density DC/DC converters and other power supplies targeting emerging applications such as wireless power transfer, envelope tracking, RF transmission, solar micro-inverters, LiDAR, remote sensing and Class D audio amplifiers. To help designers understand the subtle differences between silicon power MOSFETs and eGaN FETs, and thereby speed their adoption in upcoming power supply solutions, the company has created many application notes, white papers, and a video series for its eGaN FETs.

What’s more, to expedite the evaluation of eGAN FETs for power supply designs transitioning from silicon MOSFETs to eGaN FETs, EPC has released several development boards in the last few years. The most recent introductions, which include EPC9022 through EPC9030, offer half-bridge topology with an on-board gate driver. They are designed to simplify the evaluation of members in the company’s EPC8000 family of ultra-high-frequency, high-performance eGaN FETs. Currently, there are eight members in the EPC8000 family and there is a corresponding development board for each part, as shown in Table 1. 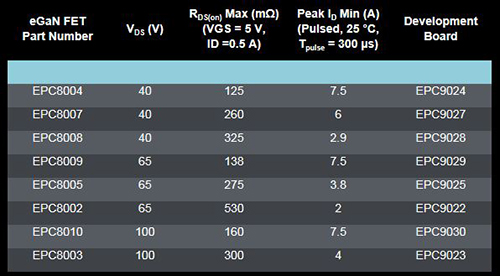 These development boards are 2 inch x 1.5 inch in size and contain two eGaN FETs in a half-bridge configuration with an onboard Texas Instruments gate driver LM5113 supply and bypass capacitors (Figure 1). Also, to make evaluation easy, it contains all the critical components with proper layout for optimal high-frequency switching performance. In addition, the board is designed to offer various probe points to facilitate simple waveform measurement and efficiency calculation (Figure 2). 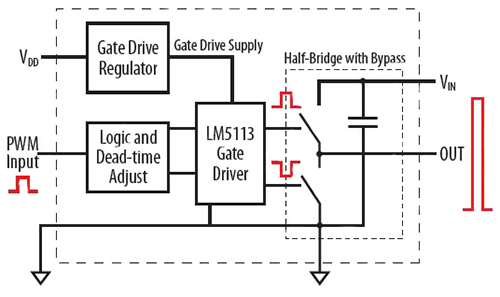 Figure 1: A block diagram of EPC’s eGaN FET development board. 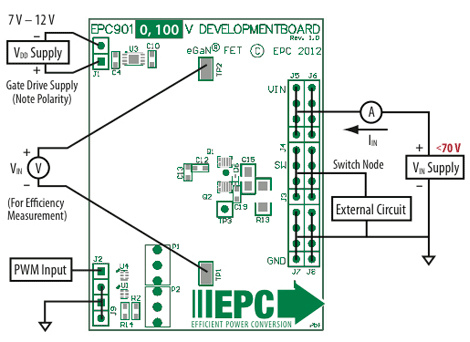 For example, EPC9022 uses two 65 V EPC8002 eGaN FETs in a half-bridge topology with LM5113 as the gate driver. Minimum switching frequency is 500 kHz. Table 1 shows that the eGaN FET is rated for a drain to source breakdown voltage of 65 V with an RDS(on) of 530 mΩ and continuous drain current (ID) of 2 A at 25°C ambient temperature. With this board, the user can measure the key distinguishing characteristics of EPC8002, including gate charge QG for a given on-resistance RDS (on), figure of merit (FOM), switching frequency and associated losses, output capacitance, and package inductance. The product datasheet shows that for a given on-resistance, gate charge of eGaN FET is dramatically lower than leading-edge silicon MOSFETs. In fact, for a given breakdown voltage, it can be one-fifth to one-twentieth that of the closest silicon MOSFET, according to EPC.

Smaller output capacitance is another benefit offered by eGaN FETs. Per the supplier’s explanation, the output capacitance for the same on-resistance can be one-third to half of similar MOSFETs. In other words, it uses half the capacitance to transfer the same amount of energy to make your designs physically smaller for higher power density.

Another distinguishing feature offered by eGaN FETs is the package inductance. EPC’s eGaN devices come in passivated die forms with solder bars. It employs inter-digitation of source and drain terminals to minimize both connection resistance and parasitic inductance. As a result, the package inductance has been reduced from 2.9 to 0.4 nH, thereby further minimizing switching losses to improve efficiency. In addition, it also minimizes overshoot and ringing. In fact, the board layout is designed to ensure that the parasitic high-frequency loop inductance is minimal because the low-inductance high-frequency loop reduces high-peak voltage and ringing (Figure 3). Reduced ringing eases design for EMI, notes the manufacturer. 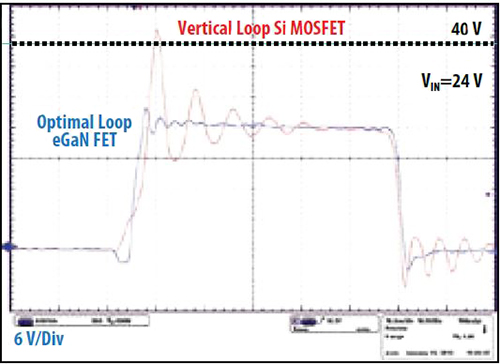 According to the demo board’s quick-start guide, EPC9101 is a 3 in.-square board that contains a fully-closed-loop 1 MHz buck converter. The power stage is a single-sided design and is contained within a 20 x 11 mm area and includes driver, eGaN FETs, bus capacitors, and output inductor. The guide also presents various probe points to facilitate simple waveform measurement and efficiency calculation. Typical efficiency performance for this circuit, as measured by EPC engineers, is depicted in Figure 5. 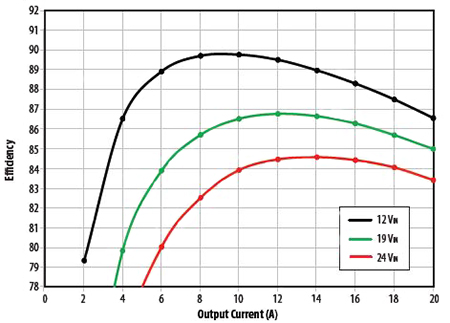 In order to make proper and accurate measurements EPC recommends strictly following the instructions presented in the demo boards’ quick-start guides (which are available on the Hotenda website).

For more information on the parts discussed in this article, use the links provided to access product information pages on the Hotenda website.
Supplier
Product Type
Industry
Function