A look at developing fiber-optic sensor networks including the challenges and advantages.


This article looks at the challenges and advantages of using optical fiber for sensor networks with a focus on lower data rates. It covers the impact of sensors and transmitters for different fiber technologies from glass for long distance networks to plastic for shorter, lower-cost implementations, and the challenges of multiplexing sensors, with devices from Avago, Industrial Fiber Optics, Everlight, and Honeywell.

Optical fibers are increasingly being used as an integration part of a sensor network, both for aggregating sensor data across many nodes and also as a sensor itself. This is opening up new opportunities for the use of optical networks and the components that can be used to build such a system.

With the increasing interest in the Internet of Things and Smart Cities, the ability to aggregate sensor data over wide areas, sometimes as large as a city, is becoming more important. This is shifting the focus for some fiber-optic network development. Sensor networks use relatively low data-rates, and have not traditionally used the high-bandwidth fiber networks. However, the sheer volume of sensors is now making fiber-optic transport a more effective and efficient medium, as long as the data can be effectively multiplexed onto the fiber, and accurately de-muxed at the other end. This brings additional advantages, as the fiber network is inherently protected against EMC and electrical noise, allowing sensors to operate more efficiently in noisy industrial environments.

A researcher at the UPNA-Public University of Navarre has looked at various fiber-optic sensor networks for the remote monitoring of large infrastructures. Montserrat Fernández-Vallejo, a telecommunications engineer, has developed an experimental network that is 250 km in size and has multiplexing capability to allow multiple channels to be carried at the same time. This has enabled new lines of research and a host of practical applications to be opened up, particularly for monitoring intelligent or large infrastructures where there are hundreds or even thousands of sensors. Such structures can be monitored from central sites many miles away, logging measurements of structural or environmental parameters, critical states to be observed, the correct maintenance to be provided, and even preventing accidents by highlighting failing equipment that can be repaired before it causes a problem. This applies not just on the scale of a city, but also for remote equipment such as oil rigs and other marine platforms with thousands of distributed sensors.

The research addresses the three main challenges posed by optic sensor networks, multiplexing sensors in a single network, ensuring continued service in the event of a possible fault in the network, and allowing remote monitoring. The multiplexing allows the systems and their cost to be simplified, sharing both the fiber medium and the transmitter and receiver. This is a key way to reduce the cost of the system.

Required data rates and the type of fiber that is used can determine the optical frequency. Glass fibers support wider frequency ranges for more data and more multiplexed channels, while plastic fibers can be lower cost to roll out with correspondingly lower-cost interface devices.

Components such as the Honeywell HODXXXX-XXX/BBA series of dual-wavelength fiber duplex modules (Figure 1) allow full-duplex communication over a single-fiber link. They may also be used where a dual fiber solution is neither possible nor economical, or one duplex module may be used to double the capacity of an existing system. 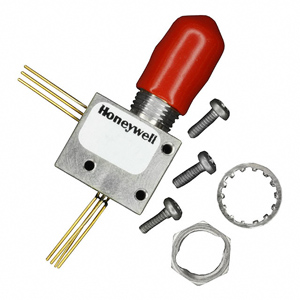 
Each duplex module consists of one on-axis port and one off-axis port, each configured with the appropriate devices. These devices are coupled to the single fiber via integral lenses and a 3 dB-wavelength differentiating mirror within the duplex module body. In this configuration, two duplex modules can communicate in opposing directions simultaneously and independently of each other. Depending upon the receiver circuitry used, links of 2 km [1.24 miles] or greater are possible.

The HOD2236-111/BBA uses a 1300 nm multimode laser as the transmitter with an 850 nm PIN diode, while the associated second unit, the HOD4090-111/BBA, uses an 850 nm VCSEL (Vertical Cavity Emitting Surface Laser) with a 1300 nm PIN diode. The key is that these units are matched to the laser in the other device for the optimum receiver sensitivity.

Other options are available, with two LEDs or lasers in one duplex module for single-fiber multiplexing, PIN+Preamp receivers (P+P), or any other preferred devices. Housing options include SC and ST optical ports or a high-profile housing for mounting duplex modules side by side. Future connectors will likely include SMA, FC, LC, and E2000.

For adding a fiber connection to an existing Ethernet-based sensor network, the fiber optic interface module from Phoenix Contact is used for connecting single-mode (monomode) glass fibers at 1300 nm to the Factoryline Modular Managed Switch. 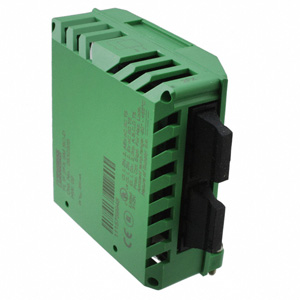 Avago’s Versatile Link series is a complete family of fiber-optic link components for applications requiring a low-cost solution, particularly with plastic fiber. The HFBR-0500Z series (Figure 2) includes transmitters, receivers, connectors, and cable specified for easy design. This series of components is ideal for solving problems with voltage isolation/insulation, EMI/RFI immunity, or data security. The optical-link design is simplified by the logic-compatible receivers and complete specifications for each component. The key optical and electrical parameters of links configured with the HFBR-0500Z family are fully guaranteed from 0° to 70°C, making them suitable for almost all sensor environments.

A wide variety of package configurations and connectors provide the designer with numerous mechanical solutions to meet application requirements. The transmitter and receiver components have been designed for use in high-volume/low-cost assembly processes such as auto inser¬tion and wave soldering. 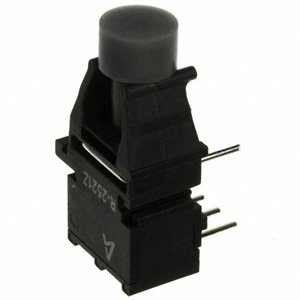 Figure 3: The Versatile Link units for plastic fiber connections in a sensor network.


Transmitters incorporate a 660 nm LED while the receivers include a monolithic DC-coupled, digital IC receiver with open-collector Schottky output transistor. An internal pull-up resistor is available for use in the HFBR-25X1Z/2Z/4Z receivers, and a shield has been integrated into the receiver IC to provide additional localized noise immunity.

The internal optics have been optimized for use with 1 mm diameter plastic optical fiber, and the specifications incorporate all connector interface losses to simplify calculating the link budget. The IF-D95T and IF-D95OC from Industrial Fiber Optics are high-sensitivity photo-logic detectors housed in ‘connector-less’-style plastic fiber-optic packages. The detector contains an IC with a photodiode, linear amplifier, and Schmitt-trigger logic circuit.

The IF-D95T features a TTL/CMOS compatible totem-pole output, while the IF-D95OC has an open-collector output. The devices can drive up to 5 TTL loads over supply voltages ranging from 4.5 to 16 volts. Optical response extends from 400 to 1100 nm, making them compatible with a wide range of visible and near-infrared LED and laser diode sources. The detector package features an internal micro-lens and a precision-molded PBT housing to ensure efficient optical coupling with standard 1000 μm core plastic-fiber cable.

The IF-D95T and IF-D95OC are suitable for digital data links at rates up to 125 kbps. A Schmitt trigger improves noise immunity, and TTL/CMOS logic compatibility greatly simplifies interfacing with existing digital circuits. The integrated design of the IF-D95 provides a total cost-effective solution in a variety of digital applications.

The key for sensor networks is that there is no optical design required and the low-cost rugged plastic-connector housing includes an internal micro-lens for efficient optical coupling, creating a connector-less fiber termination. This is vital in allowing sensor networks to be easily connected to wide area networks.

With a customized sensor network it may be necessary to build a dedicated optical receiver. The Everlight PRL135/T is an optical receiver that is packaged with a custom-optic data link interface, integrated on a proprietary CMOS PDIC process. The unit functions by converting optical signals into electric ones from a 2.4 ~ 5.5 V supply, and the signal-output interface is TTL compatible with high performance at low power consumption. This makes it very useful for battery-backed systems, allowing sensors to be integrated into more areas. 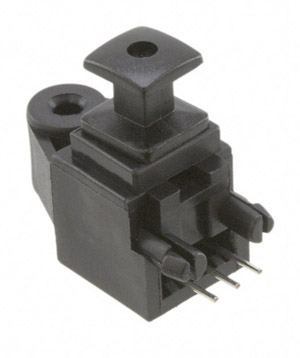 Figure 4: The Everlight PRL135/T integrates the electrical conversion with the optical interface for battery-backed sensors.


Using the network as the sensor

The fiber network can even be used as the sensor itself. The OptaSense system, developed by UK research house Qinetic, uses an existing fiber-optic cable as a monitoring sensor for security. Smart zones can be set up with different alert settings protecting different regions. Each zone is completely flexible, allowing the user to choose which type of activity the system should alert to for a given zone.

The system uses the same principle as conventional optical time-delay reflectometers (OTDRs) that are used to characterize optical fibers. An OTDR injects a series of optical pulses into the fiber under test and monitors the returning pulses. With OptaSense, the optical fiber is buried in the ground and when a vibration occurs around it, this vibration displaces the fiber ever so slightly. The conditioned pulses detect the strain caused by the vibration, and signal processing at the end determines whether the vibration is a threat.

Three elements are needed, a standard single-mode telecommunication fiber that acts as the sensing element, an ‘interrogation unit’, which houses the optical technology, and a graphical user interface and processing capability that allows the customer to interact with the system. These can be used with any optical fiber that is already in the ground, preferably one that supports 1550 nm transmission, and works at distances up to 40 km with a resolution around 10 m.

Crucially, the signal extracted from each 10 m section of the fiber is unaffected by the vibration on any other section of the fiber, including those immediately adjacent. Multiple simultaneous disturbances do not reduce the system's ability to detect other activity along the fiber.

The system is sensitive enough to detect a person walking when they are 5 – 10 m away from the buried fiber, vehicles that are 50 m from the fiber, and diggers/other larger machinery that are between 300 and 500 m away.

OptaSense can also detect changes in the underlying acoustic signature of equipment and machinery. It can therefore be used to monitor previously unmonitored equipment at remote locations such as block valve stations. It can currently classify a vehicle and a person from that acoustic signature, and the library of signatures is increasing.

It also takes into account the time of day. Traffic on a road during the day may be no issue, but a vehicle arriving late at night, stopping, and unloading several people is quite different. Time settings on different zones minimize nuisance alarms and give an effective level of sensitivity. 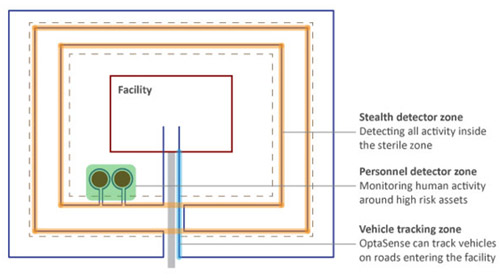 
Built upon decades of military sonar processing expertise at Qinetiq, OptaSense not only picks out the acoustic fingerprint of an event, but also monitors its activity over a short period of time to build up an exact picture of what the event is. In this way nuisance alarms are minimized.

Figure 6: There is a time dependency for security that the OptaSense system can use.


OptaSense detects the complete sequence of events leading up to a major incident with an increasing degree of certainty. The bubble plot above shows how the system has detected the same type of activity for three consecutive days. There may be nothing unusual about this type of activity during the day, however, the diurnal plot of alert distribution shows that this activity is taking place at 3 am. With this information, measures can be put in place to ensure all potential incidents are prevented. This level of situational awareness is provided before other security systems have detected anything.

Optical fiber can be used in a number of ways for sensor networks. Multiplexing data from multiple sensors in industrial conditions across distances measured in kilometers rather than meters, is allowing more monitoring of the smart city and offshore equipment. At the same time, components supporting plastic fibers are bringing down the cost of the network and the cost of installation. Even more interesting is using the fiber itself as a sensor for monitoring activity. Systems like OptaSense open up new opportunities for monitoring equipment with the fiber itself.