A look at testing standards for remote-phosphor devices due to degradation effects on white LEDs along with products from OSRAM, Intematix, and Bridgelux.


Part of the commercialization process for LED lighting products, particularly if the manufacturer is applying for accreditation to programs such as Energy Star, involves testing the lifetime and color consistency of the fixture over the long term.

Test standards such as the Illuminating Engineering Society of North America’s (IES) LM-80 (characterizing flux and color maintenance) and TM-21 (projecting long-term flux maintenance) explain how to perform the testing and estimate lifetime from the results, but the job is time consuming and tedious. However, because traditional white LEDs have been available for several years now, there is a wealth of test data that manufacturers can draw on to streamline the process.

Even so, it should be noted that remote phosphor, a recently introduced technology that is said to offer improved efficacy compared with conventional white LEDs, has not been subject to the long-term testing of other LED-based products. Worse yet, there is currently no agreed upon test standard for characterization and lifetime projection of remote-phosphor devices.

This is unfortunate because such test data would both improve the probability of successful commercialization and allow both engineers and consumers to make direct comparisons of this promising technology with existing products, particularly as research has indicated that remote-phosphor products should last much longer than conventional white LEDs.

This article considers how phosphor degradation affects the life of conventional white LEDs compared with remote phosphor. The article then follows on to explain how far authorities have progressed in drafting test standards for remote-phosphor devices. Finally, an examination of the lifetime and color maintenance claims made by manufacturers of remote-phosphor devices already on the market is included.

Yttrium aluminum garnet (YAG) phosphor plays a key role in high-brightness white LEDs. The phosphor absorbs some of the blue light from the LED and then re-emits it across a broad range of wavelengths comprising some green and red, and a lot of yellow. Combining these re-emitted photons with those directly from the LED results in an acceptable approximation of white light. 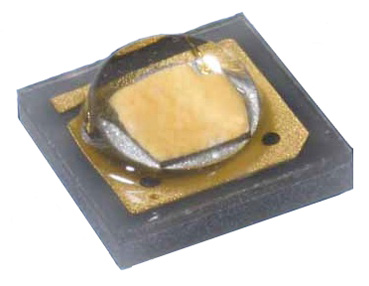 Figure 1: In many conventional white LEDs, the phosphor powder is suspended in a clear encapsulating epoxy covering the die (Courtesy of OSRAM).

There are many failure modes for LEDs (see the TechZone articles “Understanding the Cause of Fading in High-Brightness LEDs“ and “Structural Defects Undermine LED Luminosity”), but here we are concerned solely with breakdown due to phosphor-related causes.

Researchers from Rensselaer Polytechnic Institute in the U.S. conducted a major study to find out exactly what caused such failures in a conventional white LED. The researchers first noted that royal blue LEDs covered with epoxy containing no phosphor benefited from longer life than equivalent white devices. The only difference between each family was the YAG phosphor used to convert the blue light in the white LEDs, so the scientists concluded that must somehow be influencing longevity.

It turns out the phosphor itself is a very stable material, and was therefore unlikely to be the cause of failure. Rather, the epoxy was shown to have a tendency to yellow over time because of a phenomenon known as photodegradation. The yellowing gradually lowers the luminosity of the LED until it falls below 70 percent of the value when new, the point at which the device is considered to have “failed”.

Epoxy photodegradation is accelerated partially by circulation of short wavelength photons that are “trapped” between the epoxy and the reflector of the assembly, but primarily by heat. This is a particular problem with conventional white LEDs because the epoxy coats the LED’s junction, where virtually all the heat is generated.[1]

In a remote-phosphor LED package, a disc or cone carries the phosphor and is situated away from the LED array itself. Typically, the phosphor powder is embedded in or coated on the surface of a glass, plastic, or silicon substrate. When phosphor is coated on the surface, a binding material may also be used. Intematix’s ChromaLit is an example of this type of product (Figure 2). 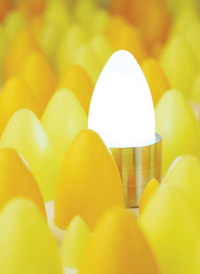 Some potential advantages of using a remote-phosphor configuration are improved die and phosphor-combined light-extraction efficacy, more uniform luminous intensity distribution, and spatial color uniformity. Another key advantage comes because the disc is away from the LED, and is therefore neither subject to heat nor the recirculated short wavelength photons that degrade the epoxy of conventional devices (see the TechZone article “Remote Phosphor Offers Alternative to White LEDs”).

Manufacturers are already taking advantage of remote-phosphor technology for LED chip-on-board (COB) arrays. COB arrays are factory-assembled units comprising tightly-packed groups of matched LEDs under a “single emitting surface,” typically a remote-phosphor disc. An example of a commercially available product is Bridgelux’s ES Rectangle Array Series. This latest generation of LUXEON® COB LED arrays delivers from 700 to 3,000 lumens and a typical efficacy of 90 to 130 lm/W (Figure 3). 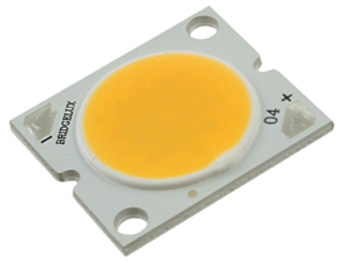 Putting LEDs to the test

Despite the epoxy degradation of conventional LEDs and other failure modes, solid-state lighting lasts a remarkably long time compared with traditional illumination. According to the U.S. Department of Energy, a user might expect an incandescent bulb to last 1,000 hours and a halogen twice that long. In the case of fluorescent tubes, the ballast technology heavily influences the product’s lifetime; with cheap ballast, the tube may last for 20,000 hours increasing to 30,000 for more expensive types. The department’s figure for LEDs is 35,000 to 50,000 hours. How is that figure derived?

The answer is by testing employing IES’s LM-80 test and using the results to extrapolate the lifetime by following the guidance issued in TM-21. As the name suggests, LM-80 is a “lumen maintenance” test procedure that is designed to indicate how quickly LED output declines in order to give some indication of how long, barring the occasional catastrophic failure, a user might expect a product to remain fit for use.

The Alliance for Solid-State Illumination Systems and Technologies (ASSIST), a group led by the Lighting Research Center (LRC) in the U.S., recommends defining “useful lifetime” as the point at which LED light output has declined to 70 percent of initial luminous flux in lumens (abbreviated as L70). The industry has generally adopted this definition.

LM-80 describes the test conditions for measuring lumen maintenance. The test samples are protected from vibration, subject to minimal airflow, operated at three temperatures (55°C and 85°C, plus one other temperature specified by the manufacturer), and with orientation and spacing as specified by the maker.

TM-21 defines an extrapolation algorithm for lumen maintenance testing. The algorithm ignores data from the first 1,000 hours, and uses data from the last 5,000 hours of the test (or final 50 percent of the data in the case of tests greater than 10,000 hours). As shown in Figure 4, the data is then fit to an exponential extrapolation model using a least-squares curve method to predict lifetime (see the TechZone article “Determining LED Rated Life: A Tricky Challenge”). 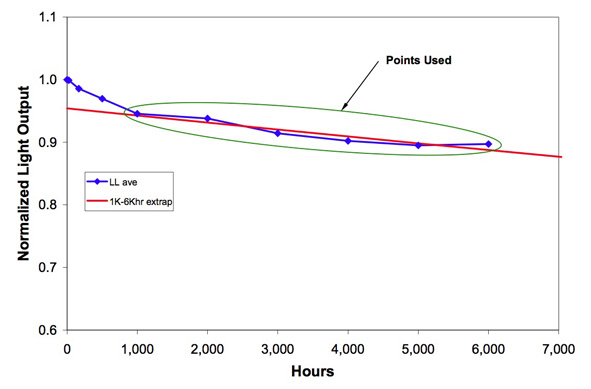 A test standard for remote phosphor

Programs such as Energy Star require testing of each complete remote-phosphor lighting fixture at a system level to qualify the fixture. Although the most accurate approach may be to measure total lumen and color maintenance at this level, the amount of time and cost to test each possible combination of components that could make up a product family is impractical (particularly as research described above indicates that remote-phosphor LEDs should outlive their conventional counterparts).

Manufacturers currently face the situation they previously witnessed when conventional white LEDs were first commercialized, a lack of data from even short-term lumen maintenance tests on commercial products. Worse yet, they do not even have guidelines on how to perform a standard test to allow comparison of one maker’s product with another’s.

The National Electrical Manufacturers Association (NEMA) has recently published a whitepaper (“NEMA LSD 68 Remote Phosphor Devices Used in LED Lamps, Engines and Luminaires”) that details testing and certification procedures that will allow the qualification of royal blue LED “photon pumps,” remote-phosphor components, and optics separately. Elimination of the need to test a product in its entirety promises to simplify the testing required to qualify for Energy Star certification.

The standards associations are addressing the problem. The IES has recently formed a working group to develop a testing standard for remote-phosphor LEDs that will attempt to mirror LM-80 to provide a method for measurement of luminous flux and color maintenance under prescribed conditions. Similar to LM-80, the document will define the test procedure but will not provide guidance or make any recommendations on how to extrapolate the results to determine lifetime.

LM-80 focuses on two critical variables that have been identified as the primary cause of LED failure (both in terms of luminosity and chromaticity changes): forward drive current and case temperature (which correlates with junction temperature). Higher currents and temperatures generally lead to shorter product lifetimes.

However, one difference between conventional white LEDs and remote-phosphor devices is that the former comprise a single packaged unit while the latter is made up of three components: the photon pump, phosphor disc, and optics. Royal blue LEDs have been characterized using LM-80 and TM-21 testing and there is no reason to suggest that combining with a remotely positioned phosphor disk will affect their lifetime, and the optics is a passive component. Consequently, the new standard will focus on the degradation of the disc itself.

Following the development of a test procedure, IES plans to develop calculation tools similar to TM-21 so that the data from the short-term test can be extrapolated to predict remote-phosphor product lifetimes. This will take some time, because besides mathematical models based on physics and empirical data, there must also be sufficient real data to make statistical calculations to an accepted confidence level.

The advantages of remote-phosphor LEDs are leading to a slew of new products. However, industry-standard testing of such fixtures, to provide engineers and consumers alike with fair comparisons of the lifetime of competitive products, is lagging.

Organizations such as NEMA have recognized that the proliferation of remote-phosphor lighting fixtures makes it impractical for manufacturers to test each one at a system level to meet qualifications for standards such as ENERGY STAR. NEMA has suggested that a component-by-component qualification method would be a better approach.

Following the success of test standards for conventional white LEDs, standards-setting organizations such as IES are working to develop a test that can join the established LM-80 and TM-21 tests for conventional white LEDs, yet cover remote-phosphor devices. Work has also commenced on guidelines for calculating long-term performance and longevity from the test. However, it is recognized that developing and agreeing to the test and guidelines will take time.

In the meantime, manufacturers of remote-phosphor products are releasing preliminary independent test data on the performance of their products. Intematix says that a sample set of lighting modules using its remote phosphors have reached 6000 hours of life testing with no lumen degradation as measured by TÜV SÜD, an independent testing laboratory. The company says a test time of 6000 hours is the minimum typically required to qualify for ENERGY STAR standards for LED lighting.

Intematix is supporting the development of new LED lighting test standards as a member of the IES.[2]

For its part, Bridgelux projects that its family of LED Array products will deliver, on average, greater than 70 percent lumen maintenance after 50,000 hours of operation at the rated forward test current (assuming constant-current operation at the nominal drive current with case temperature maintained at or below 85°C).

The company says the projections are based on a combination of package test data, semiconductor chip reliability data, a fundamental understanding of package related degradation mechanisms, LM-80 testing, and performance observed from products installed in the field using Bridgelux die technology.