Consumers understand that an incandescent bulb may last 1000 hours and a compact fluorescent light (CFL) perhaps five times that before catastrophic failure, but are less familiar with solid state lighting sources.

The problem for the manufacturers is that properly driven and thermally managed LEDs can last for years, so sitting around and waiting for an LED to fail is not a practical test regime. Secondly, an LED can either fail catastrophically or, more likely, suffer from a slowly diminishing output. At what point should such a fading LED be considered as ‘failed’?

This article discusses the standardized test method for determining approximately how long a high brightness LED will remain “fit for use.” The article then goes on to describe the latest improvement to this test which increases the accuracy of the result, then discusses why this is still not an equivalent of the “lifetimes” cited for conventional light sources - and whether that really matters.

According to the U.S. Department of Energy, lifetime is related to operating conditions (for example, ambient temperature and duty cycle) but typically a user might expect an incandescent bulb to last 1000 hours and a halogen twice that long. In the case of fluorescent tubes, the ballast technology heavily influences the product’s lifetime; with cheap ballast, the tube may last for 20,000 hours increasing to 30,000 for more expensive types.

Of course, high brightness LEDs go wrong, too, but how long will they perform before darkness descends? Compared to conventional light sources, that is a difficult question to answer.

There are several failure mechanisms for the devices that can be categorized under packaging (for example, epoxy and phosphor degeneration), semiconductor (e.g. growth of dislocation and metal diffusion), and stress (e.g. thermal overload and electrostatic discharge (ESD)).¹

According to Cree, a manufacturer of high power LEDs, "the majority of LED failure mechanisms are temperature-dependent. Elevated junction temperatures cause light output reduction and accelerated chip degradation." ²

So there are plenty of opportunities for LEDs to fail catastrophically (see the TechZoneSM article “Understanding and Preventing LED Failure”). The good news for the consumer is that the devices are remarkably durable and – provided they are driven and kept cool according to the manufacturer’s recommendation – only a small percentage of the devices actually fail in this way.

A more likely outcome is that the LED will fade until its light output becomes insufficient for the purpose for which it was intended. (Filament bulbs, halogen lamps, and CFLs decrease in brightness by 20 to 30 percent during their lifetime, too, but are very likely to fail catastrophically before this reduction becomes a problem.) The combination of relatively few catastrophic failures and extremely gradual decline in light output means potential LED lifetimes in excess of 50,000 hours are not an unreasonable expectation.

But potential and actual are two different things, and it is incumbent on manufacturers to put an exact figure on product lifetime and define exactly what ‘lifetime’ means. To do that requires testing. But how exactly do you test a product that might take six years to fail?

The answer is you do not, or at least not over such a long period. However, some form of testing has to be done with the hope that the test data can be used to estimate lifetime.

One such test, developed by the Illuminated Engineering Society of North America (IESNA) and dubbed LM-80, “Approved Method for Lumen Maintenance Testing of LED Light Sources," is regularly performed by the LED makers. As the name suggests LM-80 is a ‘lumen maintenance’ test procedure that is designed to indicate how quickly LED output declines in order to give some indication of how long – barring the occasional catastrophic failure – a user might expect a product to remain fit for use. (Note that LM-80 is designed for testing LEDs, not assembled luminaires.)

“Fit for use” has different meanings depending on the application, but for general lighting in an office environment, for example, the majority of people will accept light level reductions of up to 30 percent without complaint, particularly if the reduction is gradual.³

The Alliance for Solid State Illumination Systems and Technologies (ASSIST), a group led by the Lighting Research Center (LRC) in the U.S., recommends defining “useful lifetime” as the point at which LED light output has declined to 70 percent of initial luminous flux in lumens (abbreviated as L70).4

LM-80 defines the test conditions for measuring lumen maintenance. The test samples are protected from vibration, subject to minimal airflow, operated at three temperatures (55°C and 85°C plus one other temperature specified by the manufacturer), and with orientation and spacing as specified by the maker.

One thing that does make LED lifetime estimation a little easier is the fact that the number of times the device is switched on and off does not affect how long it lasts (in contrast to incandescent and fluorescent bulbs), so switching is not included in LM-80.

Electrical (such as input current and voltage), thermal, and humidity conditions are controlled and the photometry measurements (measurements of luminous flux) are made in accordance with an appropriate laboratory method (for example, LM-79 – see the TechZone article “The Latest Testing Requirement for Solid-State Lighting”).

The test duration should be at least 6000 hours with data collected at a minimum of every 1000 hours (a test of 10,000 hours duration is preferred). The test report includes data on initial luminous flux, forward voltage and current, lumen maintenance, and failures (including failure conditions and time of failure).

The downside of LM-80 is that the test is relatively short compared with the expected L70 lifetime for a typical high brightness white LED. Figure 1 shows some typical test data and illustrates the relatively slow decline in lumen maintenance over the duration of a 7000-hour test. 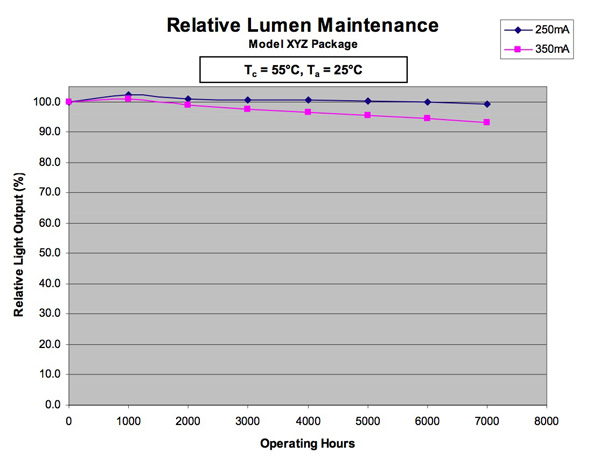 White LEDs are particularly vulnerable to temperature stress, as heat degrades the chip and the phosphor coating of the LED dome which helps generate the white light (see the TechZone article “Whiter, Brighter LEDs”). Moreover, the ‘aging’ phenomenon that causes gradual reduction in output is dependent on the temperature profile the device has experienced during storage and operation.

For this reason, the LM-80 test is conducted at three temperatures in order to indicate the effect heat has on L70. Figure 2 shows some typical LM-80 test data for different temperatures. 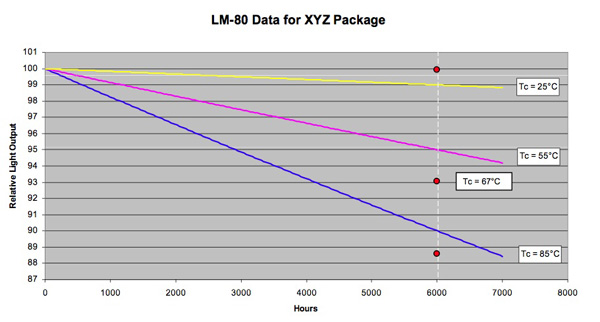 Unfortunately, LM-80 has some flaws. First, the test only indicates a mean value for the rate of decline in luminous output for the sample; and the smaller the sample, the less statistical meaningful the data. Second, even the 10,000-hour test only runs for a fraction of the LEDs potential lifetime. So determining the L70 point has to be done by extrapolation.

An extrapolation algorithm is not defined in LM-80 (consequently the extrapolation method varies between manufacturers making comparisons between products difficult).

The new algorithm ignores data from the first 1000 hours, and uses data from the last 5000 hours of the test (or final 50 percent of the data in the case of tests greater than 10,000 hours). The data are then fit to an exponential extrapolation model using a least-squares curve method (Figure 3).

The extrapolation function defined by TM-21 is of the format:

Where α and B are determined by the least squares fit function. 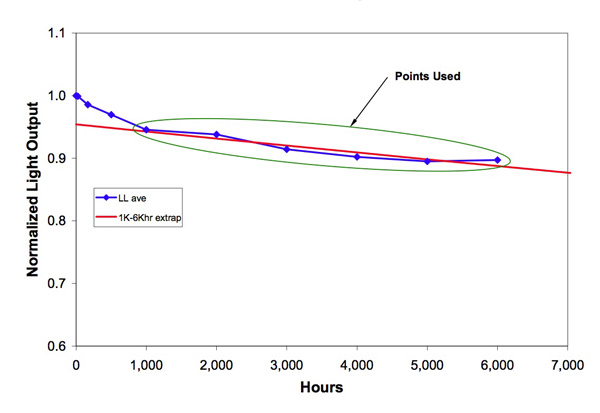 From TM-21 to rated life

TM-21 does allow a manufacturer to state, with reasonable accuracy, that the mean value of L70 for a sample batch of its product is a certain number of hours, for example, 50,000. Engineers and consumers can then compare this with another supplier’s figure of, say, 36,000 hours. (Incidentally, the U.S. Energy Star program requires an LED to attain an L70 figure of 35,000 hours for qualification under the program.)

However, although TM-21 (approved in July 2011) defines a standard algorithm for extending LM-80 data beyond the 6000 or 10,000 hours test point to accurately determine L70, the test will not tell the manufacturer how many of the devices it makes could be expected to reach the L70 point without suffering another form of failure.6 In other words the method does not lend itself to a calculation of a product’s “lifetime”.

A manufacturer is unable to state what percentage of a given batch of LEDs will actually last until the L70 time. Some will succumb to catastrophic failure well before, while others will decline to L70 much faster than the mean. How many is anybody’s guess.

What is needed is a combination of data from a long-term test to determine rates of failure from all failure modes (dubbed Bp - where p is a percentage of failures at a given time) including L70.

The conventional lighting industry states the “lifetime” of a particular light source to be the point at which 50 percent of devices (B50) under test have failed – no matter what the failure mode. This is called the “rated life.”

A comparable figure for high brightness white LEDs would be B50L70. In other words, the rated life of the product would be the number of hours for 50 percent of a sample to fail or decline in output to L70 (which is, in effect, the end-of-life for LEDs that have not succumbed to another failure mode).

Thus far, no manufacturer has done the multi-year tests needed to find out this result for a particular product. And it is unlikely any supplier would commit to such a task because LED technology moves so quickly that if the tests were actually conducted, the data would be obsolete – along with the tested product – long before they were published.

However, this does not make the L70 data a waste of time. This is because L70 is a relatively accurate measure providing an indication of how long a given device is likely to last before its output declines beyond a useful point. For LEDs that are driven and cooled properly, luminous flux degradation is by far the most common failure mode.

In contrast, while conventional light sources do fade over time, they are much more likely to fail catastrophically before this becomes a problem. In other words, falling luminosity is a relatively insignificant contributor to their rated life.

Table 1 illustrates today’s situation. Conventional light sources are ranked by a rated life (the point at which 50 percent of units have failed), whereas high brightness LEDs fall in a class of their own, “estimated useful life.” It is not ideal, but it is the best compromise available.


Table 1: Rated/useful life of light sources. (Courtesy of the U.S. Department of Energy.)

Some LED manufacturers have embraced the L70 lifetime as a way to promote the longevity of their product ranges. OSRAM, for example, claims its OSLON high brightness LEDs have an L70 figure of 50,000 hours (junction temperature not stated).

Seoul Semiconductor’s Acriche high brightness LED range offers up to 40,000 hours (for its pure white product with an LED junction temperature of 85°C). 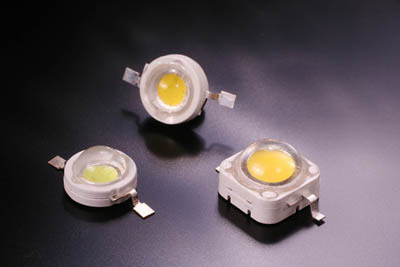 (It should be noted that these numbers are issued for guidance only, and it is not known if they are calculated using the TM-21 algorithm. Readers are advised to check product data sheets or contact the distributor for the information needed to make direct comparisons between products.)

Engineers are in little doubt that correctly installed high brightness LEDs last longer than conventional light sources. Consumers are a little more skeptical, and the lack of certified information does not help overcome their doubt.

While testing the rated life of LEDs is not common practice, luminous flux degradation testing is more routine. The establishment of a standardized test and extrapolation algorithm will improve the credibility of the figures from different manufacturers, such that like-for-like comparisons are practical.

However, the current tests do not take into account other forms of failure. The excuse is that comprehensive tests take too long and these other failure modes are insignificant. Nonetheless, LED manufacturers should be encouraged to commit to repeated long term testing with large batches of their products. That way, statistically significant samples would be available for further analysis allowing extrapolation algorithms to be fine-tuned to include all modes of failure in order to estimate a rated life for a given product.